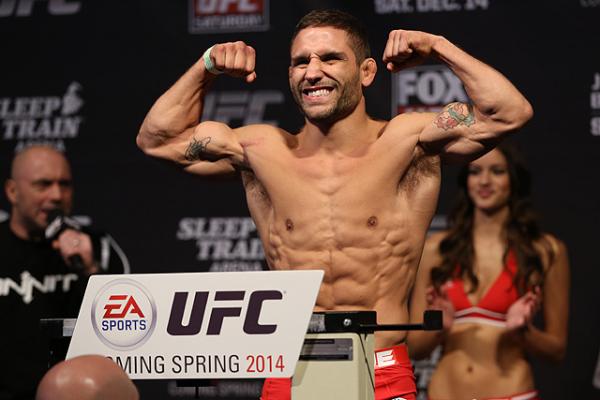 On Friday, April 3, the UFC will host the weigh-ins for UFC Fight Night 63: Mendes vs. Lamas which takes place Saturday, April 4, from the Patriot Center in Fairfax, Va.

In the night’s main event, former featherweight title challengers Chad Mendes and Ricardo Lamas lock horns. Mendes competes for the first time since dropping a five-round war against champion Jose Aldo at UFC 179 last fall. Both of the 29-year-old’s career losses have come against the Brazilian. Lamas, meanwhile, is looking a second crack at the champion. The 32-year-old has earned two straight wins since falling to Aldo in early 2014.

The co-main event features a pair of lightweights hoping to fight their way into title talk as veteran Jorge Masvidal takes on TUF: Live runner-up Al Iaquinta. The former Strikeforce title challenger Masvidal has won five of his six fights in the Octagon, including three straight. Iaquinta rides a similar wave of momentum, having won six of his last seven, with his last three wins coming via TKO.

The fighters will hit the scales at 12 p.m. ET on Friday. A live video feed appears above (courtesy of the UFC), while the results appear below.