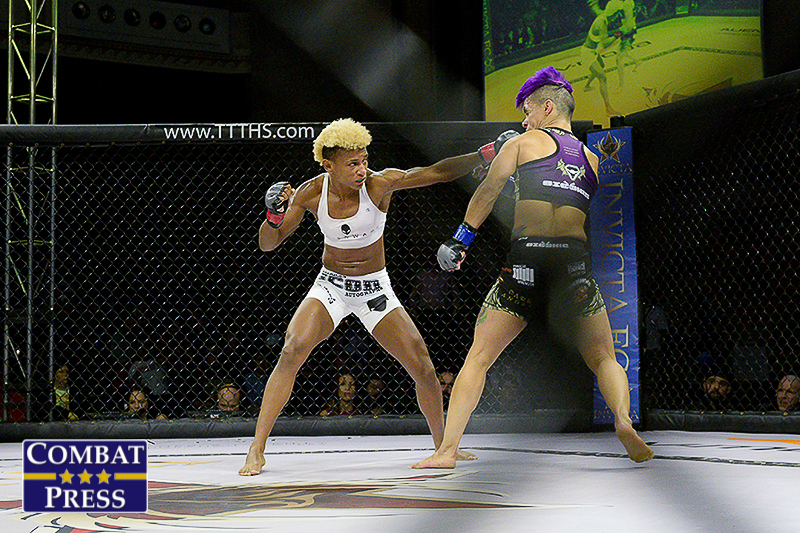 Frey beat de Paula via unanimous decision, but she did not fight the fight I expected. While I thought takedowns might be an option, I did not expect them to be Frey’s main focus. I am happy to have been wrong, though.

Frey made it clear right from the start that the takedowns and ground game were how she wanted to fight in this contest, and it was smart. She got the early takedown in the first and stayed on top. I like that she stayed relatively active but didn’t overexert herself. I had said that this was a fight where she might want to save some energy for the third round and be able to move her arms. With as much muscle as Frey carries, it can make the arms burn out. She didn’t get overanxious, either. She didn’t try to force passes or do anything that she shouldn’t have done.

De Paula was focused a little too much on looking to make something happen off her back as opposed to looking for an escape, be it by shrimping her way out, scooting her back to the cage, or even just holding on to Frey to force a stand-up.

Round two was great for de Paula. Frey was more willing to stand with her, and the Brazilian showed off her great striking. After how well Frey did on the ground in round one, it was a bit surprising to see her willing to stand. However, there could be a variety of reasons for this. Perhaps Frey felt that de Paula might have been tired after the first round. Or maybe she knew she had a round in the bank and could take a risk in standing with her opponent.

One thing that really impressed me from de Paula was the speed on her high kicks. She gets them up there fast and does so seemingly out of nowhere.

Frey was smart in the third frame. She knew where she needed to be and quickly got the takedown. From there, it was just a replay of round one: Frey on top, landing when she could land, not rushing, and not forcing anything. De Paula did try to make things happen off her back, though. She wasn’t a stationary target by any means. However, just as in the first round, she should probably have worked to get up as opposed to trying to be offensive on the mat.

What’s next for Frey? The winner of this coming week’s clash between Cheyanne Buys and Montserrat Ruiz would be a logical choice.

Aldrich was handed the split-decision win, but more people talked about this fight being a “robbery” than about how great the fight was. So, let me address the judging.

I had this bout scored for Casey, 29-28. It really came down to how you viewed round three. In my opinion, it went to Casey. However, it was close. I can see the case for scoring it in Aldrich’s favor and think it is fine to have done so. We use the word “robbery” far too loosely. You can think someone won a fight and it not be a robbery if they lose. Ask yourself: did Casey dominate the third round so much that there is no way you can give it to Aldrich? The answer to that is no, and that was the only round in question. In my view, Cortney did enough to win the round, but it wasn’t to the point where there is no possible way to give it to Aldrich.

Now, let’s rewind to round one. Casey got the better of the striking in this frame. Her shots seemed to have more on them. She was landing and picking her shots wisely, and she was aggressive. Aldrich could have had more success with more movement and circling. I really like Aldrich’s striking when she moves outside and comes forward at opportune times. She was coming forward, sure, but in a more predictable manner.

Aldrich did get a couple takedowns in the first round, which I thought were a good idea to slow down the momentum of Casey. To be honest, Aldrich probably needed them just for her own safety. However, it was Casey off her back looking for submissions and preventing Aldrich from really getting anything going.

Round two was a good one for Aldrich. She made some very good adjustments and had a big bounce-back round. I was really impressed with that. Often, we as fighters go into a fight with a game plan and when it doesn’t go the way it’s expected, we get desperate and try to force it to work. Aldrich did not do this. She remained patient and got back in the fight.

The third frame was such a great one. Both fighters landed hard shots and still had power. Again, I favored Casey in round three. She was coming forward and landing very well. However, what people didn’t give Aldrich enough credit for is how she landed while moving. When a fighter is moving backwards, it sometimes is hard to give them credit for what they are doing. It’s hard to erase the visual of them backing up and looking like they are being forced back due to being hit. Maybe that visual did apply at some times to Aldrich, but she also did her share offensively.

What’s next for Aldrich? I feel weird mentioning her, because I sometimes train with her, but maybe Liana Jojua would make for an interesting fight.

There really isn’t a whole lot to say here. It was the best performance Hill, who took the unanimous nod, has had in the UFC. It was three rounds of Hill landing hard and frequent shots while also shutting down any offense Yoder wanted to try.

Hill was landing so frequently that Yoder was forced to be reactionary. Yoder had no time to try to make anything happen offensively, because she was forced to think about self-preservation.

Hill also did really well in putting Yoder closer to the cage. Yoder’s angles of escape were limited, because she had less space to try to create those angles. In those closed spaces, Yoder didn’t have many takedown options. She couldn’t get close to Hill very often, because she was eating punches and didn’t have the space to try many different takedowns. When Yoder did try them, Hill didn’t engage in any clinch game. Instead, Hill blocked the takedowns, backed away, and started throwing again.

Hill was also sensing the hesitation from Yoder when Yoder was trying to strike. Every time there was a hesitation, Hill pounced and unloaded.

Let’s be clear, though. Yoder did not fight a bad fight so much as Hill was just on her game. Hill was so good that it made Yoder look bad. It would be unfair to knock Yoder for this fight, as it would take credit away from Hill’s performance. Yoder is a talented fighter, but there are two things she could have done differently in this affair.

First, Yoder did one thing that she normally doesn’t do, and it was more so because of what Hill was getting done with her strikes. Yoder would stick her hand out, sort of feinting a punch, pull it back, then extend it and throw the punch. It was basically three steps to throw one punch: extend, pull back, extend again. That’s a lot of work for a punch. If you are reading this, stand up, pick an arm, extend it three quarters of the way, pull it back and then extend it all the way. That’s what she was having to do to throw a punch. Now, extend one arm three quarters of the way and, while pulling it back, throw a punch with the opposite arm. That required only two movements and was quicker, right? Is that necessarily an ideal way? No, but it would have probably been a little better.

Second, Yoder’s takedown attempts were predictable. She really was only trying for them in one way. She would get close and try to tie up the upper body and force Hill down. Hill was able to easily break away from these attempts. There wasn’t much of a setup, so Hill knew they were coming. Yoder might have had better luck trying to set them up. She could have maybe thrown a quick flurry to disguise a shot. The flurry doesn’t even really need to land, as it’s just something to distract Hill and get her eyes looking up. Once Hill is doing that, Yoder could drop down and go for the legs.

These things are easy when you are sitting at a computer typing about them, as opposed to being in a cage getting punched in the face and trying to do them.

What’s next for Hill? I wouldn’t be opposed to seeing a rematch with Claudia Gadelha. Their first fight was super close, and a case could be made for Hill having deserved the decision in that one.