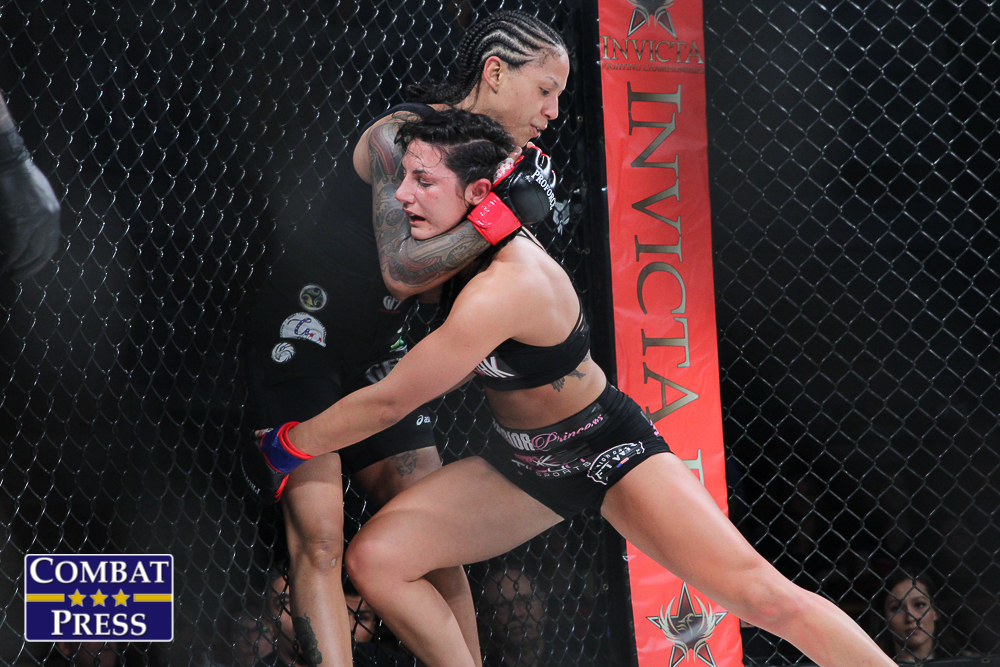 What is there really to say about a one-minute fight? I was really excited for this one and hoped for a three-round war. I tweeted right before the fight started that it was the fight I was most looking forward to.

Buys had no interest in what I wanted and decided to get this over with quickly. Almost immediately the fight hit the ground and De Paula tried to do what I said in my preview, be active off her back. Buys didn’t seem to like that or just wanted it on the feet on got up. As De Paula looked to stand, Buys blasted her with a hard kick. Really the fight was over right there, but De Paula tried to recover. Buys rocked her again and followed her to the ground and got the finish.

There were some who didn’t like it not being stopped, but I wasn’t terribly upset with it myself. The referee was signaling to make sure the kick was legal and Buys was able to land more at that point. This was a really nice win for Buys. Not just any win, but a highlight-reel finish.

What is next for Buys? How about Miranda Granger?

This was a fun fight. Yoder came out moving forward and throwing punches, something I did not expect. I don’t think Frey expected it either. She likely expected Yoder to look to get it down right away. Or at least do what I said in my preview, move backwards and let the striker take the center of the cage.

After about a minute of that, Yoder went back to her normal style of backing up, letting the striker come forward and take the center. Frey seized that and had success. But Yoder landed as well. She did show improved striking, but it was not on par with Frey’s technique.

As this was going on, my thought was that Yoder was looking to let the takedown come to her. She wasn’t going to shoot in for it and instead hoped Frey came close enough to get a clinch and takedown. I seemed to be in the minority, but I did give round one to Yoder.

Round two was big for Frey. She was hurting Yoder big time with punches and it looked like she might even get the finish. Frey was aggressive, but not overly aggressive to where she got too close and let Yoder get the desperation takedown.

In round one, Yoder used her length well with her strikes, but in round two she stopped doing that. She would throw the jab and leave it out there. When you keep the arm extended without motion, it leaves an opening for your opponent. You have an unguarded part of your face and against a good striker like Frey, it allowed her to land rapidly. Late in the round Yoder was able to land with basic combos, but it wasn’t enough to take the round.

Round three was fun. Yoder really made an effort to get back into it and landed shots that hurt Frey. Yoder wanted takedowns, but was never really in a position to get them. I think once she realized that, she decided she had to return fire. It was clear throughout that Frey was the better striker, but Yoder showed a toughness that was really impressive. In the end, it was a Frey round and she sealed the win.

What is next for Frey? Maybe the winner of the Sam Hughes and Lupita Godinez fight?

I loved what I saw out of Joanne in round one. There was a huge difference between what she did and what Porto did. First off, she ended or began combos with low kicks and never the same attack, always something different. In fact, that applied to more than just when she threw kicks. Joanne was throwing different strikes constantly. Some at different angles, some rushing in, some countering. The wide variety made it hard for Porto to get into any kind of flow.

Where that difference came was movement and counters. Joanne would move left to right and get out of the way of Porto’s counters. Porto’s movement was more straight back and that is not good. You are not going to avoid punches doing that and you’re likely going to get hurt. Joanne’s speed also allowed her to land counters to Porto’s punches. Porto wanted to counter, but she just didn’t have the speed to keep up.

Round two could have gone either way. The first half of the round was pretty much a repeat of the first round. The big difference on the feet was Porto wasn’t moving back this time. However, she was making the mistake of chasing Joanne instead of cutting her off. Joanne was still getting the better of the striking, landing harder and more frequently.

Then Porto got a takedown. Joanne looked for a guillotine, but she was never close to getting it. I would have liked to see her let go of it sooner. When you continue to try and squeeze a choke that you are not going to get, the only thing it does is burn your arms out. That is bad news going forward. Once she did let go, they both landed some strikes, Porto from the top and Joanne from the bottom.

Joanne nicely worked to her feet and then as she sensed Porto getting another takedown, she jumped the guillotine again. As they went down, she had a tighter grip on it this time. Porto pulled out and landed some nice elbows. I barely gave this round to Porto, favoring slightly what she did on top. But giving it to Joanne is also logical, as she won on the feet, had two submission attempts and did land some from the bottom.

Round three was not exactly as exciting as the first two. You had two tired fighters at this point. I want to point out something from commentary. Joanne was throwing more at the start of the round. John McCarthy said it was due to Porto having been hit so much that it was making her hesitant to throw. That is incorrect. That is not why she was not initiating any offense. Look closely and you will see some very slight shoulder movements. In reality, Porto was just trying to draw punches out of Joanne because she wanted to shoot off the strikes. Was it working? No. But that is what Porto was attempting to do.

As for the round itself, Joanne had success in the opening part, but Porto then got a nice takedown. Joanne scrambled, but Porto got it back down and stayed on top. Soon after, the referee stood them up for inactivity. My dislike of stand-ups is no secret and I didn’t like it here. However, based on when they want refs to stand fighters, this was an acceptable one. Just like round two, I barely gave it to Porto. I had it for her 29-28, however rounds two and three were so close that I wouldn’t have argued 30-27 for Joanne.

What is next for Porto? How about Kate Jackson?