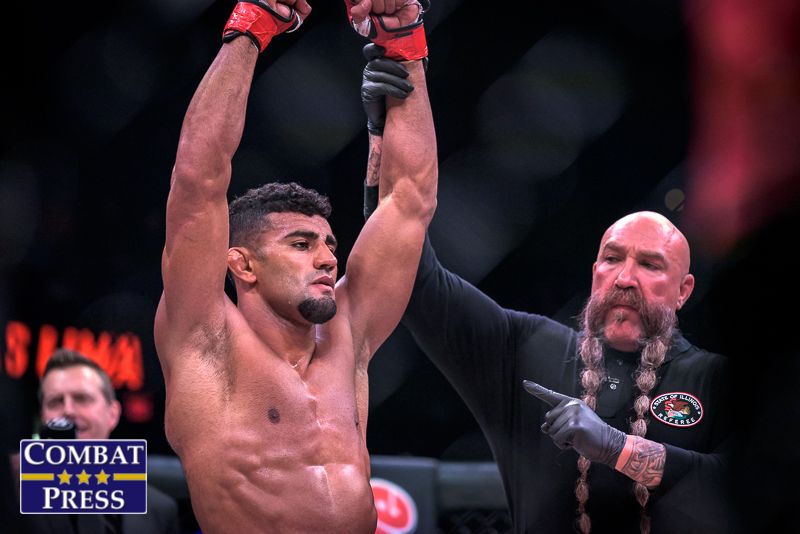 Bellator will leave their home inside the Mohegan Sun Arena for a trip to Tacoma, Wash. Bellator 283 features twelve fights on Friday, Jul. 22, including a top-ranked welterweight showdown, the debut of a highly-touted RIZIN fighter, the return of Usman Nurmagomedov, and a handful of upcoming prospects.

In the main event, the third-ranked welterweight Douglas Lima looks to bounce back from a three-fight losing streak against the streaking fourth-ranked Jason Jackson. These fighters are at different points in their career, but the style matchup makes for an intriguing main event.

The co-main event will be between Sidney Outlaw and Tofiq Musayev at 155 pounds. Outlaw was supposed to fight Patricky “Pitbull” Freire for the lightweight championship, but Pitbull pulled out with an injury. Outlaw now gets to fight Musayev, a former RIZIN champion making his Bellator debut.

The Bellator 283 preliminary card airs live and free on Bellator’s YouTube page starting at 7 p.m. ET with the main card following on Showtime starting at 10 p.m. ET. Check out the full preview and predictions below.

Former welterweight champion Douglas Lima has dropped three straight fights; does he stop the skid in his main event clash with Jason Jackson?

Lima has been on a brutal stretch of fights, losing three straight against top-tier competition. Unfortunately for him, Jackson is not an easy opponent to turn things around. ‘The Ass Kicking Machine’ has recently put everything together and has a solid chance at becoming the Bellator welterweight champion.

Lima tends to struggle against pressure fighters like Jackson. The former Bellator champion often finds himself backed up against the cage where his leg kicks and punches aren’t as effective. Lima needs to prevent Jackson from controlling the distance, and he also needs to throw combinations instead of one or two punches.

Meanwhile, Jackson has evolved and needs to do what he’s been doing. Applying pressure with his combinations, close the distance, mix up his strikes, and go for a takedown if needed. Jackson is a bad matchup for Lima, and this could be his breakout moment with a dominant win.

Tofiq Musayev makes his Bellator debut in the co-main event; what kind of statement does the former RIZIN standout make when he takes on Sidney Outlaw?

Outlaw got screwed with this matchmaking, but respect for still taking the fight. Before being matched up against Musayev, Outlaw was already fighting for the title, which he could have chosen to wait until Patricky “Pitbull” Freire recovered from his injury.

Instead, Outlaw accepted the fight against Bellator newcomer Musayev, a dynamic striker with a win against Pitbull in RIZIN. If Outlaw wants to find success, he needs to keep Musayev moving backward.
Musayev has tremendous footwork and creates angles while setting up his opponent with feints. Some of his opponents tend to get lulled to sleep when suddenly Musayev finds an opening and finishes the fight. Although Outlaw has tons of experience, Musyaev should be able to create an opportunity and finish the fight by knockout.

Usman Nurmagomedov puts his undefeated record on the line against Chris Gonzalez; does the Dagestani get the win and move to 15-0?

Nurmagomedov vs. Gonzalez should be a banger. At 24 years old, Nurmagomedov is following in the footsteps of his cousin Khabib. Holding a record of 14-0, Nurmagomedov is a well-rounded fighter with creative striking that’s hard to prepare for.

Meanwhile, Gonzalez is 7-1 and coming off a head kick KO win in his last fight. Nurmagomedov could win this fight in several ways, but the blueprint from Goiti Yamauchi is probably the best chance.
Yamauchi overwhelmed Gonzalez with volume and ultimately finished the fight in the first round. Whether Nurmagomedov takes that approach or decides to keep his distance, Gonzalez is going to have his hands full. Nurmagomedov by unanimous decision.

Lorenz Larkin vs. Mukhamed Berkhamov is the sleeper match-up to keep an eye on. Hardcore MMA fans might remember Larkin’s UFC run, especially his dismantling of Neil Magny. After starting 0-2 in Bellator, Larkin has shockingly won six straight fights against solid competition.

On the contrary, Berkhamov is 1-0 in Bellator after finishing Jaleel Willis in the first round. Berkhamov is now on a twelve-fight win streak with finishes against Musayev, Jesse Taylor, and Brett Cooper. Larkin is primarily a striker, and Berkhamov has ten submissions on his record.

Will Larkin continue his rise to the top at 35 years old? Or is Berkhamov the future of the Bellator welterweight division? With the betting odds nearly even, this fight should be getting more attention.