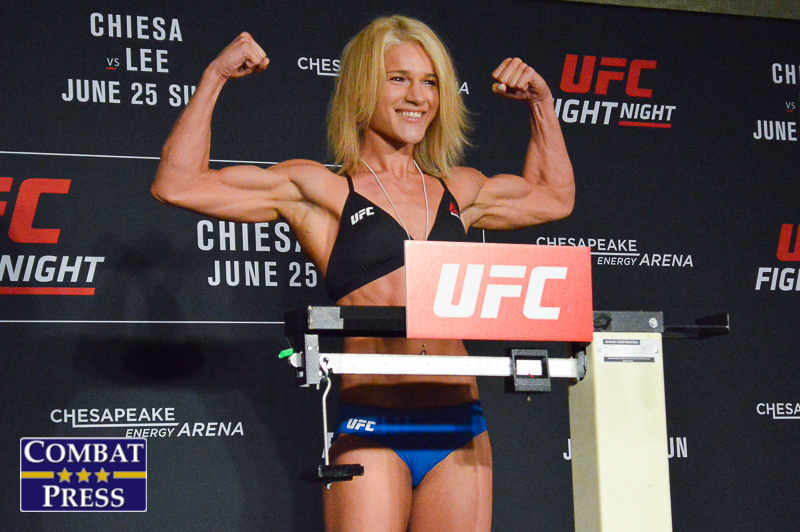 In light of the results of last weekend’s two UFC events, The Ultimate Fighter 26 Finale and UFC 218, there are plenty of talking points to touch on regarding the many female mixed martial artists who competed. Let’s jump right in, shall we?

Michelle Waterson, who fought Tecia Torres on the pay-per-view portion of the UFC 218 card, needs to go back to atomweight. She also needs to take Jessica Penne and Jodie Esquibel with her. This is not slight to any of them. They are all well schooled, experienced, skilled and talented fighters, but they aren’t legitimate strawweights. While they are tough enough and savvy enough to win versus the low- and mid-tier ranks of the 115-pound division, they aren’t strong enough, big enough or athletic enough to beat the first- and second-tier fighters in the division.

Waterson was manhandled and out-hustled in a three-round decision loss to Torres. In her previous fight, she was outstruck, outmuscled and out-hustled en route to a submission loss against Rose Namajunas, the current UFC strawweight champion. In both fights, Waterson had enough skill or experience to win — or, at the least, to be competitive — but she was lacking in power and physical strength. At the lower weight of the atomweight division, Waterson, as well as Penne and Esquibel, are world-class fighters. A division up, all three ladies are average or slightly above. That just isn’t good enough.

The aforementioned Torres, with her third win in a row, has thrown her hat in the ring as a potential title challenger. Her striking seemed a little more well defined and layered, but there are lingering questions regarding her ability to out-grapple the current champion, Namajunas. However, Torres has faced Namajunas multiple times, so it’s more likely that she is prepared to attack, counter or defend the champ in that range.

Cortney Casey, who suffered a split-decision defeat against Felice Herrig on the preliminary card of UFC 218, is a big, strong, durable and athletically gifted fighter who is one of the more skilled ground fighters in the strawweight division. She is also a rote striker and the owner of some of the worst cage IQ in MMA. Unlike physically limited fighters, Casey has the tools to do a lot, but she rarely showcases those tools. Her fight with Herrig was yet another example. Despite a reach advantage, Casey didn’t commit to a jab or stay active with one. She essentially used no kicks, and she initiated no grappling exchanges or takedowns. Also of note was her inability to take away Herrig’s left hook, which landed all night long, or neutralize Herrig’s overhand right, which landed whenever she threw it.

What makes this a particularly damning performance for Casey is that Herrig was never forced to work at a higher pace. Herrig never had any weapon taken away from her and she was never forced to be on the defensive. This is all because the bigger, stronger, more athletic fighter never made any adjustments — not in strategy, not in pace and not in regards to the tools she used. Casey was rocked, pushed back, taken down, kicked, out-landed, outworked and bullied by an older, smaller, weaker and less athletic fighter. What is worse than it actually happening is the fact that she accepted it. It seems she felt she did enough, but it’s baffling why anyone would limit themselves to boxing and think they can win a fight against someone using all of the tools in MMA.

Herrig is one of the best comeback stories in MMA. Previously an underwhelming veteran known more for photo shoots and promos than results in the cage, Herrig has now won four fights in a row, five out of her last six, and has looked increasingly sharper, more disciplined and more technical in each victory. She hasn’t faced a murderer’s row of fighters, but she has taken two blue-chip prospects from the ranks of the unbeaten and decisively defeated Casey, who was coming off the best win of her own career. Herrig has quietly put together a string of wins and put herself in position to be considered a legitimate title contender.

It makes sense why Lauren Murphy would move to flyweight. Her size, strength, durability and aggression are able to mask some of her limitations as it pertains to her footwork, her defensive acumen and her actual striking. In previous fights at bantamweight, Murphy’s inability to physically control or dominate fighters resulted in her losing competitive decisions. In an earlier fight with Katlyn Chookagian, the lack of developed footwork, feints and varied offense resulted in a similarly competitive loss.

These issues were still present in Murphy’s fight with former Invicta flyweight champ Barb Honchak at the TUF 26 Finale. However, at flyweight, the price she has to pay for them isn’t quite as steep, due in large part to the the power not being as dynamic at this weight class. At flyweight, Murphy may be able to find and maximize takedowns she wouldn’t get at bantamweight. Furthermore, she won’t be taken down and controlled like she was at 135 pounds. And if she can’t score takedowns, then she can grind and wear on girls in the clinch in a way that she wouldn’t be able to at bantamweight. Essentially, Murphy, who edged Honchak in a split decision, is a somewhat limited high-IQ fighter. As a flyweight, Murphy’s limits aren’t quite as big a factor, meaning that her IQ and veteran savvy become bigger ones.

Roxanne Modafferi, who lost to Nicco Montaño in a bout for the inaugural UFC women’s flyweight title, is one of the classiest athletes in any sport. She is also a martial artist in the truest sense. This sport, these fans, these fighters, these coaches and these promotions don’t deserve her.

The aforementioned Montaño has demonstrated poise and grit. She isn’t a finished product, and there’s a good chance that very soon she is put in with some very experienced, athletic and young fighter who might take her out, but what stood out in her fight with Modafferi was her showing in the second round. Modafferi had her figured out, had her timing down and had started to gain momentum. It would have been easy for Montaño to break, get defensive or get desperate and look for a finish — all of which would have gotten her soundly beaten — but she didn’t. Montaño stayed the course, continued to pressure, upped her work rate, and forced striking and grappling exchanges. Most importantly, she made the fight ugly. She adjusted her approach based on what was in front of her.

This is a skill that most veterans don’t have. It wasn’t that Montaño did something so advanced technically or strategically, but she did something brilliant situationally. Against the aforementioned Murphy on The Ultimate Fighter, Montaño showcased a bit more movement and clean, varied striking. Against Honchak, she flashed a more punishing and physical style. Against Modafferi at the Finale, it was active, punishing, high-activity strikes mixed with aggression and physicality in all grappling exchanges.

The favorites in The Ultimate Fighter house all lacked a certain amount of athletic ability. They had a lot of experience, skills and savvy, but none of them were any of the better athletes in the house, nor were they the better athletes compared to the fighters who will soon be moving up or down to be in the flyweight division. They all can refine skills, diversify skills and build on those skills, but none of them are talented enough to get by on ability. None of them are young enough that they can afford any egregious errors in their careers, either. Each and every one of them will max out the opportunity they have in front of them in regards to preparation, techniques and strength and conditioning. In regards to physical strength, power and athletic ability, however, they are all at huge disadvantages.

As much as we want to romanticize sports, especially combat sports, the fact of the matter is that physical ability matters. If you think it doesn’t, then ask Jessica Andrade or the aforementioned Waterson, Esquibel and Penne. Andrade wins on durability, explosiveness and physical strength, and the others all lost fights in large part due to a lack of these things.