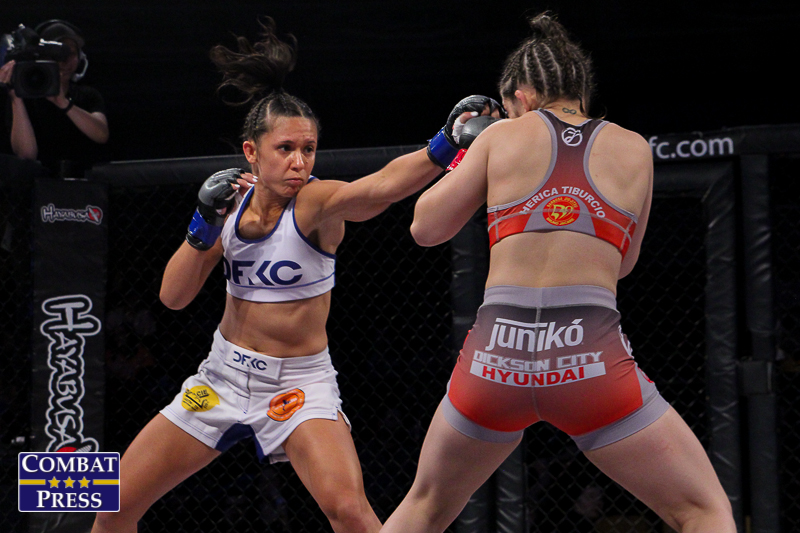 On Friday, Invicta Fighting Championships will hold its 26th card, headlined by a flyweight title tilt pitting champion Jennifer Maia against top Polish flyweight Agnieszka Niedźwiedź. The bill showcases primarily contests in the 125-pound and 115-pound divisions. The lone bout in the eight-fight lineup not falling into either of those categories takes place in the atomweight division, where Tessa Simpson looks to cement her position among the elite as she squares off with Amber Brown.

MMA has long been considered a male-dominated sport, with very little in the way of high-profile women’s contests. Over the last 15 years, though, we have seen a growth on the women’s scene and a change in how women’s bouts are promoted. Even with the increased exposure, in many cases it is hard for female athletes to consistently get fights and earn a living doing what they love. Despite these challenges, the flow of women to the sport of MMA has only increased.

“I’ve been involved in competitive sports since junior high, and for me it was an outlet,” Simpson told Combat Press. “Once I found jiu-jitsu, I was immediately hooked. I had watched Pride and Pancrase before I started training, but I never imagined it would be something I did competitively. However, after starting jiu-jitsu, I naturally wanted to compete. Muay Thai was offered at our jiu-jitsu school, so I started doing both. There wasn’t any opportunity to do Muay Thai competitions in Texas, so that led me to want to compete in MMA. Fighting came very natural for me.”

Simpson opened her career with an impressive 4-1 mark that included triumphs over Paulina Granados and Japanese contender Satomi Takano. It didn’t take long for promotions to come calling. Gone are the days of women’s bouts being primarily contested overseas. Many organizations are on board with women’s MMA, but Invicta FC was certainly a pioneer in its focus exclusively on female fighters.

“I wanted to work with Invicta for a few reasons,” said Simpson. “Since its inception, they have set the bar for women in MMA and have helped a lot of women grow their careers. I appreciated the fact that they signed and promoted their athletes based on skill and accomplishments, not just solely on appearance.

“When I dropped down from 115 pounds to 105 pounds, I said in my mind that I would be champion at this weight class. Invicta’s atomweight champion was ranked No. 1 in the world, and that’s what I have my eye on!”

In her last appearance under the bright lights of Invicta FC, “The Typhoon” experienced her first setback at atomweight. She was outpointed by former top-ranked Brazilian Herica Tiburcio.

“I tried to be a little too technical that fight and relied too much on my jiu-jitsu off my back,” Simpson explained. “That fight was a big learning lesson in aggressiveness, cage control and winning in the judges’ eyes.”

The weight cut is an important part of competition, too. Up until recently, it was typically an overlooked aspect of the fight game. Media and fans alike have been keeping a closer eye on how fighters look on the night of the weigh-ins and if they hit their contracted weight. Recently, Sijara Eubanks had to pull out of her bout with Nicco Montaño for the inaugural UFC women’s flyweight title due to complications from cutting weight. There was much conversation on how drained José Aldo and Max Holloway looked on the scales ahead of their featherweight title tilt. Having a fight scheduled close to the holidays doesn’t make the job easier, either.

“Growing up on Guam, Thanksgiving was a little less traditional on the island,” said Simpson. “I don’t really crave turkey, stuffing and mashed potatoes. To me, [fighting] is my main job and main focus, so I make sure all my meals are prepped so that I stay on track. I’ve had to cut around the holidays in the past, so it’s nothing new. That’s not to say that I don’t have a wishlist of my favorite foods I want to have after the fight is over!”

Invicta FC atomweight queen Ayaka Hamasaki’s future in the division is unclear. The Japanese fighter might just make her move to 115 pounds a permanent one. This leaves people to wonder if a new champion will be crowned in 2018. Further complicating things is the match-up for the Road FC atomweight championship, as Seo Hee Ham will defend her newly won title against top Invicta contender Jinh Yu Frey on Dec. 23. The bout between Frey and Ashley Cummins at Invicta FC 24 was referred to as a title eliminator by promotion head Shannon Knapp in June, but there’s been no news on the fate of the title since Frey’s victorious outing.

“I haven’t heard anything specific,” said Simpson. “I think Jinh is in line to fight for the open title, but they don’t have another contender yet. As far as my position in the mix, according to the Unified Women’s MMA Rankings, I’m ranked at No. 5. The other atomweights on Invicta’s roster that are ranked top 10 are Jinh at No. 2, Julia Jones at No. 6 and Ashley Cummins at No. 7. I’m hoping that a solid win over Amber Brown will get me that shot at the open title against Jinh, whether or not she wins her fight against Ham.”

Invicta has been actively seeking partnerships with other brands looking to promote women’s bouts. The organization recently announced a talent-sharing deal with Pancrase. The aforementioned Frey has been allowed to compete for Road FC while still under contract with Invicta, and Rizin is in the middle of its Super Atomweight Grand Prix, contested at 108 pounds.

“I think it’s great that Invicta is working to pull in the best talent, which creates exciting fights and helps fighters grow in their skill sets,” Simpson said. “I’m definitely open to unique opportunities, but my focus is on obtaining Invicta gold.”

2017 was a historic year for the women’s scene, which enjoyed an increased presence in major MMA brands. Both Bellator MMA and the UFC crowned champions at the flyweight and featherweight levels. Atomweights, however, remain confined to the likes of Invicta FC, Road FC and a handful of Japanese promotions.

“It’s only a matter of time,” Simpson suggested. “Atomweight is a small division, but it’s definitely deeper than featherweight. The fights are always exciting, so in my mind I don’t see it being too far off before the UFC adds an atomweight division.”

Simpson looks to get back on track with a strong performance against the always-tough Brown. The loss to Tiburcio did not shake her confidence, as she expects a dominant victory on Friday night.

“My mindset is to go in there and beat Amber in every position and every exchange,” said the confident Simpson.