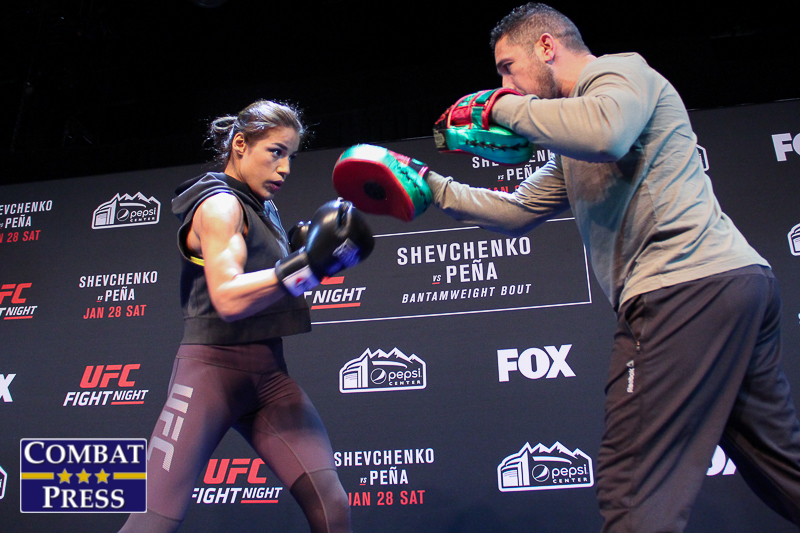 New Kids on the Block: Mike Valle Details the Rise of Valle Flow Striking in Chicago

Valle Flow Striking, the home to one of the UFC’s most promising prospects and prominent coaches, easily blends into the industrial neighborhood of Chicago that surrounds it. Once inside, the gym doesn’t conjure up the images many fans would associate with a high-level gym. That’s quite alright with the man behind the madness.

Mike Valle is known as the coach of rising superstar Yair Rodriguez, former The Ultimate Fighter winner Julianna Peña and a bevy of other fighters fans will hear of in the near future. He received his first big coaching gig under famed coach Greg Jackson in Albuquerque, N.M. Home to some of the best fighters in MMA, Jackson-Wink is not only a hotbed for fighters, but coaches as well. Valle’s trip to Jackson-Wink is unconventional, but it fits the nature of his coaching style perfectly.

“It got to a point where I had my gym in Texas and I told Goyo [Erik “Goyito” Perez] there wasn’t anything more I could do for him,” Valle told Combat Press. “Here, I’m very limited. I’ve never been a guy to hold people down, and [I] know my limits. I knew at the time I couldn’t give him what he needed, which was the knowledge of MMA — we had the knowledge of boxing and kickboxing — so he went over there [to Jackson-Wink].”

So often, coaches who lose their star pupils wind up fading to obscurity. This was not to be the case for Valle. Perez, with the approval of Jackson, eventually convinced Valle to come out to Albuquerque and help him. While traveling to help Perez, Valle met one of the most important people to influence the direction of his coaching career.

“I went over there, and Gina Carano was there,” said Valle. “I had met Gina in San Francisco previously. She recognized me and saw me holding pads for Goyo. She was getting ready to fight Sarah D’Alelio in Strikeforce, and she asked if I could help her. Basically, Gina was the one who financed my way into coaching.”

The toughest task for a promising coach in MMA is finding a financial base. There are number of people who have the talent, but few of them have the financial stability to share their knowledge full-time. Once Valle had the ability to shift his focus to coaching, it wouldn’t take long for his skills to be noticed by other prominent fighters at Jackson-Wink.

Outside of coaching, Valle also took on the responsibility of heading up the Latin American program at Jackson-Wink. Beginning in 2013, the camp hosted a number of MMA prospects from Latin America. Jackson-Wink gave these fighters the opportunity to live and train at the gym. Originally planned for a six-month trial run, the initial program lasted for over a year. Eventually, the best of the best were selected to appear on the inaugural The Ultimate Fighter: Latin America.

“When we got Goyo to the UFC, they saw how passionate the Latin American fans are,” Valle said of the UFC’s interests south of the border. “The best concerts and events are in Latin America. Latin American[s] watch TV more than anyone else. So [the UFC] wanted to get in there. They knew there was a little base in boxing, so what they wanted to do was take some guys, train them for a year and see where they go.”

The fighters from Jackson-Wink trained with all the coaches at the gym, but Valle represented an obvious choice for the predominantly Mexican group of fighters. This trend has continued with fighters like the aforementioned Rodriguez and Peña, as well as others from countries such as Costa Rica who now look to Valle for guidance. Still, the man known for his work with “El Pantera” doesn’t want to be pigeon-holed for his efforts.

“I don’t want to be labeled as the guy that only trains Latin American guys,” Valle said. “I have that label now, but I train more than just Latin American fighters. I’ve trained other guys like Belal Muhammad, some Russians like Rustam Khabilov and ‘Frodo’ [Magomedrasul Khasbulaev] and other guys that aren’t from Latin America. But it helps to know the language and what I can offer them. I have facilities where they can come and stay.”

Part of what Valle has to offer those willing to make the trek to the Midwest to train at his Chicago gym is something beyond the facility itself.

“We sold our house and we have a three-flat. We rent out the top part to guys so they can come in and stay while they train,” Valle said. “I got a guy from Chile who is 18 years old. He’s a monster. I have ‘Kike’ [Enrique Gonzalez] fighting in [Legacy Fighting Alliance]. He’s 18 years old. He’s very good. I have another one fighting in Costa Rica. Yair was out with him. He’s 18 years old, too. I have some young kids, so it’s going to be a little bit of a process, but in a couple years they’re going to be solid guys in the UFC.”

The ability to house fighters from all over the world is an invaluable asset to the Valle Flow Striking team. Guys who are willing to put their personal life on hold know they have a place to stay, removing one item from the list of travel concerns. It’s a nice benefit to fighters outside the Chicagoland area, but it’s only the beginning of what athletes can look forward to when training at VFS.

Another benefit athletes can enjoy inside the gym is the chance to work with one of the best pad holders in MMA. Considering the amount of mitt work that fighters love to upload to social media, it wouldn’t hurt to have one of the best striking coaches guiding these fighters through combinations.

Mitt work is something of a divisive topic throughout combat sports. Some coaches will swear by it, believing it helps their fighters learn to string combination attacks together. Others, however, will downplay the role of padwork during training camp, believing it’s mainly for show and to get the heart racing. Regardless of the importance fighters place on hitting the mitts, Valle is fairly confident that it’s been a key to the success of fighters under his watch.

“I’m very peculiar with my pad work. Not to sound arrogant, but I can hold pads very well,” Valle said with a smile. “I believe in long combinations, keeping a strong balance and having the strikes flow. I got a lot of influence from Roger Mayweather. Everyone used to laugh at him holding pads, like, ‘What is he doing?’ Now everyone wants to do that.”

Drawing influences from Mayweather, the aforementioned Jackson and Olympian John Smith, Valle has created a family-like vibe with those he trains. Watch clips of him working with fighters, and you’ll see that Valle is a man of few words.

“I’m a very quiet guy, but I’m very stern with my guys,” Valle said. “I’m quiet but direct when I need to give instruction. Whenever you’re coaching, the athlete is under a lot of stress. If I’m in the back yelling to create a sense of panic, it just doesn’t work. Everything happens so fast in competition — you have to be calm.”

Valle has only been in the Chicagoland area for two years, but he has already earned a reputation for sporting one of the best camps not only in the area, but in all of MMA. Despite the quick rise to fame, Valle still had to endure some growing pains after leaving Jackson-Wink.

“We didn’t have a gym for the Andre Fili fight,” Valle said about the early days of VFS. “We basically did all our training in our garage. We bought some mats, cleared out a 20×20 spot in our garage and trained for that fight. We are fighting the best guys in the world, from one of the best teams, and we won out of garage. It’s crazy. Struggles like that make you appreciate what we have now.”

You’d never know it from Rodriguez’s performance against Fili at UFC 197. He produced one of the must-see moments of 2016 when he landed a flying head kick to score a knockout win and a “Performance of the Night” award.

Since the Fili fight, Rodriguez has turned into a bonus machine, capturing “Fight of the Night” in his first UFC headlining appearance against Alex Caceres and another “Performance of the Night” honor for his picture-perfect destruction of MMA legend B.J. Penn earlier this year. Rodriguez’s rare combination of skills has earned him a heap of praise. His fights have become can’t-miss bouts, and it’s clear the UFC has a real superstar on its hands. To top it all off, Rodriguez is only 24 years old.

“He’s still evolving,” Valle said of his star pupil. “I don’t think they’ve even seen what he’s capable of. What he’s doing out there is very basic compared to what he’s doing in here. He can do some crazy stuff. He comes in from every angle and is very fast. Jesse Delgado is one of the fastest wrestlers I’ve seen in my life, and he’s not as fast as Yair. [Rodriguez] makes Jesse look slow sometimes.”

As good as Rodriguez has been for Valle’s career, it takes more than one prize fighter to build a legacy. Beyond a bevy of young and developing talent, such as the aforementioned Gonzalez and the Calvo brothers (Carlos and Jose Luis), Valle Flow Striking added another high-level fighter to its roster when the aforementioned Peña moved to the area to live with her boyfriend.

“She’s a fierce competitor,” Valle said. “I haven’t worked with her too much, but I wish I had more time to work with her before the [Valentina Shevchenko] fight. She got caught. It’s the fight game. She still believes she can become the world champion.”

Despite the addition of Peña, Valle maintains he’s not looking to turn Valle Flow Striking into another mega-gym. A firm believer in smaller sessions that allow more hands-on coaching, Valle will undoubtedly look to maintain the close-knit nature of VFS. With the results he’s produced thus far, it’s hard to argue he should shake anything up.