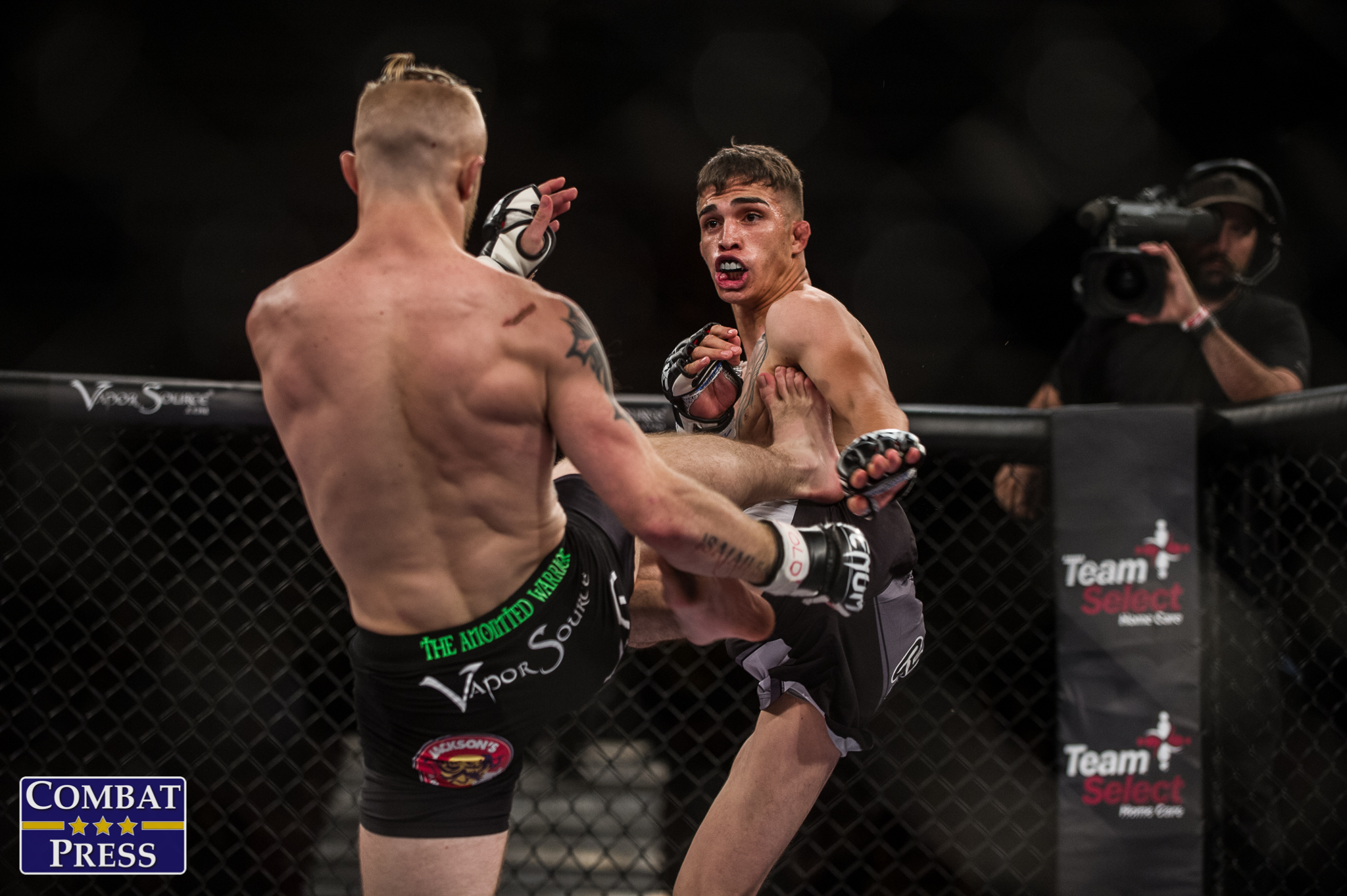 Out of Obscurity: Hex Fight Series 9, LFA 14 and Cage Warriors 85

The Hex Fight Series is back with its ninth event. The Australian promotion has lined up a main event for its light heavyweight belt. The men vying for the strap are undefeated up-and-comers Jim Crute and Shaw Dean.

The 21-year-old Crute has been fighting professionally since early 2016. So far, he’s steamrolled through four opponents. His debut bout ended in a first-round submission win for “The Brute” over Aussie MMA veteran Ben Kelleher. Crute then went the distance in a winning effort against Mike Turner. His two most recent outings ended in knockout victories over .500 fighter Matt Eland and the formerly undefeated Nathan Reddy. Crute is a Brazilian Jiu-Jitsu purple belt who trains under kickboxer Sam Greco.

Dean has been a pro far longer than his rival in this title tilt, but he has seen a lot of downtime between fights. The “Almighty” one made his debut in 2013 with a 22-second knockout finish of sub-.500 fighter Jesse Gibbins. His next fight took place approximately three months later and resulted in a first-round submission win for Dean over rookie fighter Nick Rundle. He sat on the sidelines for a year before returning in 2015 to knock out Hoshi Friedrich in just 54 seconds. After another year of inactivity, Dean appeared in 2016 against veteran Joe Muir and ended the bout by knockout in the first round. This fight against Crute will be the first outing of Dean’s 2017 campaign. When he’s not fighting, Dean serves as the head coach and owner of the Hybrid Training Centre in Tasmania. Shaw, a decorated grappler, is also a purple belt in BJJ.

The intrigue of this fight between Crute and Dean centers around the pair’s quick finishing abilities. This one could be over in a blink, no matter who wins. While Dean is a head coach at Hybrid Training Centre, he hasn’t built quite the same resume in the cage as Crute. Dean’s opponents carried a combined 14-9 record into action against the undefeated fighter, whereas Crute’s foes brought a 26-15 mark. Crute has also been keeping up a steady pace, while Dean has fought just once a year.

This fight will feature plenty of excitement for however long it lasts. Crute’s experience against veteran opponents should give him the edge, but it’s hard to ignore Dean’s quick knockouts. Yet, the biggest factor might be in size. Dean took his first two victories at middleweight and his two most recent wins as a welterweight. Crute has been a light heavyweight for his entire pro career and should be able to withstand Dean’s striking attack.

Crute has knockout power of his own, especially in his haymaker of a right hand. Dean demonstrates a solid clinch, but he can get a little wild and doesn’t seem to mix in the other aspects of his game very well. Meanwhile, Crute can move from a Muay Thai plum to a kickboxing base and then threaten with takedowns. Crute’s the more well-rounded fighter and has the potential to put away Dean early by knockout.

The 14th edition of Legacy Fighting Alliance might be one of its best offerings yet. It certainly has the most stacked lineup of emerging prospects that we’ve seen in awhile. The middleweight championship showdown between Brendan Allen and Eryk Anders is worthy of its own preview, but we’ll focus on the other title clash, which takes place in the flyweight division between undefeated fighters Roberto Sanchez and Jerome Rivera. The winner will become the inaugural LFA flyweight champion.

The 31-year-old Sanchez competed for Legacy FC all the way back into his amateur days, resulting in a 3-1 ammy mark and a Legacy amateur title win. At the pro level, the Texas-based fighter has been even more consistent. He debuted in early 2015 and scored a win over Jacob Silva. He moved on to fight slightly better opposition in his next four Legacy bouts and came away with four more wins. He moved on to the newly formed LFA in 2017 and added a submission victory over Klayton Mai. His amateur career was divided between split decisions and submission victories, but he’s primarily flashed his grappling acumen as a pro. After his pro debut went the distance, Sanchez reeled off five straight finishes. He can be quick too — just ask Mike DeLeon, who only lasted 54 seconds before Sanchez caught him in a choke.

The 22-year-old Rivera could be the future of the 125-pound division. A member of the Judgement MMA team in Santa Fe, N.M., Rivera has worked for a number of the region’s organizations, including Triple A MMA and Fresquez Promotions, while also making stops in King of the Cage. The youngster compiled a 5-0 mark as an amateur, taking all five wins by submission, before turning pro in 2014. As a pro, he has five submission victories and two decision nods. He notched wins over veteran opponents Jesus Urbina and Saul Elizondo before making his first LFA appearance at LFA 10 in April. Rivera emerged from his promotional debut with a decision win over Zac Riley, albeit at bantamweight.

Sanchez is ridiculously aggressive. He’ll jump to a standing guard in the clinch, as he did against Trent Meaux at Legacy FC 42, and he’s not afraid to end up on his back, eat punches or get slammed while looking for an armbar. His persistence paid off against Meaux. More importantly, Sanchez excels at taking advantage of his opponent’s mistakes. Against Mai, any small error in movement cost Mai position, including a stumble that allowed Sanchez to take his back in the second round and eventually sink in the fight-ending rear-naked choke. If you make even a small mistake against Sanchez, it can be game over.

Rivera is a lot more likely to try to inflict damage via ground-and-pound before going for any submission attempts. While his relentless approach can wear down fighters over the course of 15 minutes, as it did with the aforementioned Riley, Rivera isn’t quite the quick starter. In fact, he made a couple of big missteps early against Riley that could have cost him the fight. Rivera was able to successfully defend and escape against Riley, but he won’t find the same room for error against Sanchez. If Rivera is slow out of the gates, Sanchez will destroy him.

The flyweight division has provided MMA fans with some of the best grappling exchanges in MMA history. Sanchez and Rivera are certainly capable of putting on a show. Expect a fight that’s heavy on scrambles, sweeps, transitions and swings in momentum. We often talk about fights where the winner is likely to be the first man to land a punch flush. Well, this is a fight where we could see the submission equivalent. Sanchez’s ability to capitalize on mistakes has become a huge difference maker that has allowed him to hold onto his perfect record. He’ll continue to do so with a submission finish of Rivera.

If the LFA card, plus major events from Bellator and the UFC, isn’t enough for you this weekend, UFC Fight Pass has you covered with the 85th edition of Cage Warriors. The bill is topped by a showdown for the vacant middleweight title. Bellator and Ultimate Challenge MMA veteran Jason Radcliffe gets a crack at the belt in his promotional debut against Polish prospect and fellow Cage Warriors newcomer Oskar Piechota.

Radcliffe has been a mainstay on the British circuit, where he has competed under the Cage Rage, UCMMA and Contenders Norwich banners and made an appearance with Bellator during the promotion’s stop in London. “The Assassin” debuted in 2011 with a quick knockout loss to Ben Callum, but turned his fortunes around by reeling off five straight stoppage wins. He scored two knockouts, two submissions via strikes and a choke submission during this streak, but his victims consisted of rookie and sub-.500 fighters. Following a quick submission loss to the formerly winless Chad Brown, the Tiger Muay Thai and London Shootfighters product went on another run of stoppage victories, this time tallying six wins. His streak included four straight knockout finishes of 60 seconds or less, and totaled five knockouts and one submission. While his first three wins in this stretch came against a trio that boasted a horrendous 2-17 combined mark, his most recent three wins came against the trio of Jack Mason, Pasquale Coluccio and Wilfried Edmund, who carried a combined 38-17-1 record into action against Radcliffe.

The 27-year-old Piechota has primarily competed in his native Poland, but he also made one stop in Sweden. This will be his first trip to England. “Imadło” hasn’t settled in with one promotion. The journeyman fighter has captured all of his victories by stoppage, including five submissions and three knockouts. He did fight to a split draw against Rafał Haratyk in a 2013 bout. The Piranha Grappling Team export made his pro debut in 2011 and won his first three fights before encountering Haratyk. Since the split draw, he’s finished five more opponents, including the formerly undefeated Mattia Schiavolin and veterans Craig White, Nikos Sokolis and Sergio Souza.

Piechota isn’t quite as renowned as many of his Polish prospect counterparts, but he’s a talented fighter who has posted a number of victories against solid regional competition. Radcliffe, meanwhile, has relied too much on padding his record with wins against fighters far below the .500 mark. While Radcliffe’s recent opponents have been of a higher quality, Piechota might prove to be one step too far. The Polish upstart will have to avoid Radcliffe’s striking attack and counter by putting the fight on the mat, where even an 0-2 fighter was able to submit Radcliffe. If Piechota can implement this strategy, the victory should be his for the taking.