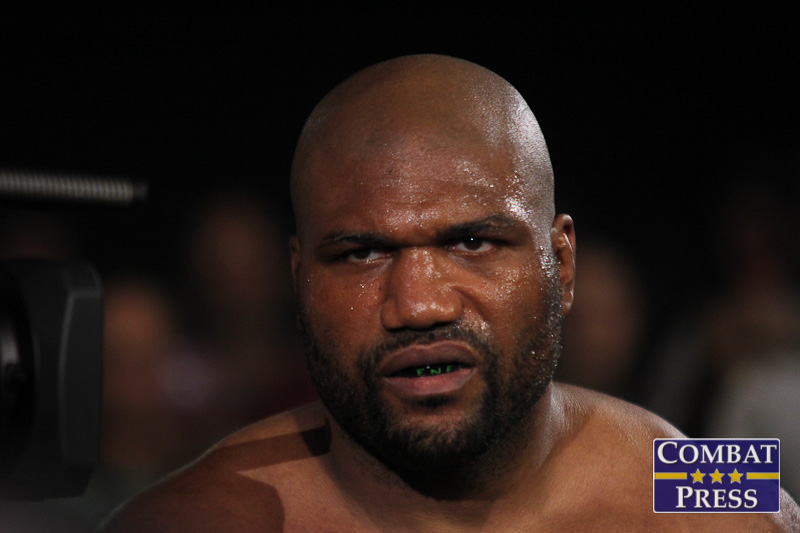 After Rampage defeated Muhammed “King Mo” Lawal at Bellator 120, much fuss was made, especially by King Mo, about the unanimous nod Jackson received. Fully convinced that he was robbed, Lawal exchanged words with Rampage following their fight. Shortly after their verbal sparring match, Rampage said he would like another go-around with King Mo so that he could knock out Lawal.

Bellator 120 took place in 2014. Finally, three years later, both fighters are poised to get what they wanted. The rematch is soon to come. Bellator MMA announced that these two will lock horns once more, this time at Bellator 175 at the Allstate Arena in Rosemont, Ill., on March 31.

When the fight was announced, Rampage volleyed several shots at King Mo, especially when it comes to their mindsets approaching this fight. Rampage has made it clear that he wants to knock out Lawal.

“He really motivated me by fat-shaming me and calling me a fat ass,” Jackson told ChicagoLandSportsRadio.com host and Combat Press writer Mike Pendleton.

While he’s looking for the knockout, Rampage knows that Lawal will only want to wrestle with him.

“I’m a fighter; I like to fight,” said Rampage. “For King Mo, he’s a wrestler [and] he likes to wrestle. He likes to hump people’s legs. My legs don’t like him.”

Rampage, a 16-year veteran of the sport, says everyone knows his body is banged up. However, no matter what hurts, he has his sights set on King Mo.

“This guy is a coward,” said Jackson. “He’ll look for any way to get a disqualification, or any type of advantage he can get to get any type of win. I’m banged up, but I feel rejuvenated and I feel good again.”

The first fight between Rampage and Lawal did feature a lot of wrestling throughout all three rounds. Most of the wrestling exchanges came from King Mo after Jackson looked to stand and trade with him. With the previous experience and knowledge of King Mo’s likely game plan, Rampage has adjusted his own training regimen. He believes the different circumstances surrounding this rematch will spell double trouble for Lawal.

“I’ve done more wrestling this camp than in my previous one, and now being at heavyweight, it’ll be harder for him to take me down and there will be more weight behind my punches,” said Jackson.

When it comes to the long-standing feud between these fighters, Rampage does not hold back on his feelings.

“I personally think King Mo needs to get a life,” Rampage said. “He’s making all these memes about me on social media, and I see it all. He’s happy and proud of his memes that get 600 likes and make fun of me for being fat. Have I made fun of his nipple rings? No, I have not. I’m taking the high road. I made memes of him before, but that’s because he thought he won the fight.”

The bitterness between these two will only make the intensity of this fight that much stronger on a big stage right in the backyard of Chicago for Bellator MMA. Now that the rematch is set, words will be exchanged. Hopefully for the fans, though, the strikes will fly just as much as the words, if not more.