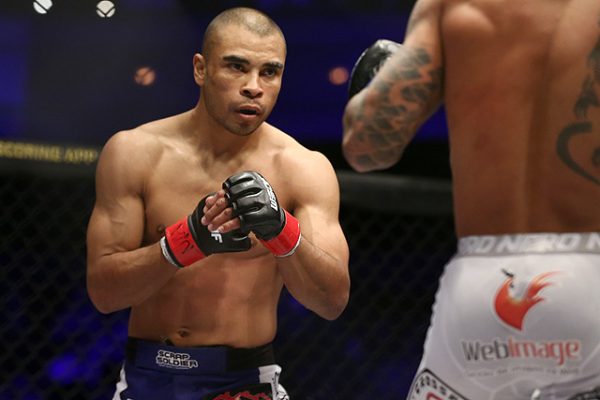 If you have a family, one of your primary responsibilities is to put food on the table. Unfortunately, some athletes complain that they live in poverty. Their dream job just doesn’t pay enough. Well, whose fault is that? It’s easy to play the blame game, but with a family comes a big responsibility.

While difficult for some to comprehend, many pro athletes, even ones without families, still have day jobs. Fans don’t always understand this, because they look at professional sports as some fantasy world. Obviously, some sports pay a great deal more than others, but even highly paid athletes sometimes still hold down nine-to-five gigs. In a sport like MMA, it’s pretty much a necessity. One does not need to look far to see full-time firefighters, business owners and insurance salesman gracing the inside of the cage.

Robbie Peralta is an 11-year veteran of MMA. He is 19-8-1 as a pro. He has previously held titles in two different divisions of the Gladiator Challenge promotion and has fought across Strikeforce, the UFC and the World Series of Fighting. He has only been to decision seven times in his 28-fight career.

That’s only part of the story, however. Peralta also has three daughters. The oldest duaghter is a teenager and the youngest is a newborn. Like many fighters, he holds down a full-time job.

“I’m a wastewater treatment operator at Valley View Casino,” Peralta told Combat Press. “I’ve been doing that for about seven years. I’m going to continue doing that, because that’s my main source of income — my job.”

Peralta is not a diva like some other fighters try to be. He has a family and a very level head. He knows what his priorities are.

“[My oldest two kids] go to school in the mornings and then after-school programs, so they’re busy until 4 p.m., and I work from seven to three,” Peralta said. “I get off and go pick them up. Then, I get to spend some time with them before I hit the gym. My oldest is playing soccer.”

For all intents and purposes, Peralta’s story outside of the gym is that of a ”regular Joe” supporting his family. However, his cage presence is anything but ordinary.

“I come out to give the people what they want to see,” Peralta explained. “They want to see a fight, and that’s what I do. I come out to knock people out and finish the fight. I don’t play the safe fight or the lay-and-pray. I’m a fighter. I go out there and give it my all. No matter where or who it is, I’m going out there to finish fights.”

Peralta is a hard-banging taekwondo black belt who has fought everywhere from 125 to 155 pounds. He has finished 15 of his opponents, with only two of those stoppages coming by way of submission. However, after racking up a 5-1-1 record in Strikeforce and the UFC, he hit a rough patch. From May 2014 to December 2015, Peralta lost three in a row. He needed a break.

“I just relaxed,” Peralta said. “Relaxed, focused on the family, spent time with kids and the new baby — I just had to unwind. The whole fight game and everything can be a little bit stressful, especially [because] I work full-time and, after work, I go train. Back home, with family, I took complete time off from training to regroup with everything and get focused again. It was good for me.”

Peralta returned to the cage in Abu Dhabi by March 2017. While he lost again, he was back in the swing of things. In September, he headlined the first installment of California Cage Wars and picked up a win over fellow veteran Shad Smith. Things were finally back on track.

“It felt real good to get back on the winning side of things,” Peralta admitted. “After the losses I had, it definitely felt good to get my confidence back up.”

Training for MMA is a lot of hard work, especially while trying to work a full-time job. Winning is very rewarding, but losing can really start to wear on the psyche. It’s easy to bounce back from one or two losses, but when it starts getting to three and four in a row, even the hardest fighter in the world can start to doubt himself. The win over Smith was exactly what Peralta needed, and it led right into a great opportunity.

On Friday night, Peralta will be back in action on the main card of Bellator 201 in Temecula, Calif., where he faces surging talent Juan Archuleta. Archuleta is also a former Gladiator Challenge titleholder, and he’s held titles in multiple divisions with King of the Cage. Archuleta only has one loss in 19 pro fights. After winning his Bellator debut against William Joplin in March, he will now face Peralta.

“My trainer got a call from Bellator, and I guess they were looking for somebody to match up against Juan, and he asked me if I wanted to take the fight,” Peralta said. “It’s a big opportunity, so I couldn’t pass it up. I’m thankful for it. I know he’s a wrestler. I know he’s a grinder. It’s nothing I’ve never seen before or never faced.”

Peralta primarily trains out of North County MMA in Escondido, Calif., where Johnny Hues is the head coach. He also crosstrains at various other gyms around the San Diego area, including Alliance MMA. Pechanga Resort & Casino — the venue for Bellator 201 — is only a half-hour drive from his gym.

Peralta may not rely on fighting to pay the bills, but a nice fat check from a top promotion always helps. With his girlfriend Christina holding down the fort and allowing him to train properly, Peralta is in a position to make a big statement.

“I have a good, supportive girlfriend, and she really helps me out,” Peralta said. “I’ve been going through a lot, trying to train and preparing to fight, so she’s been doing a lot, and I’m thankful for that.”

Peralta has a huge opportunity ahead of him on Friday night. Win or lose, the bills will still get paid, but he didn’t accept this challenge with the expectation of losing. He knows he can win anywhere the fight goes, and it’s really easy to look back on his career to see that there really is nothing he hasn’t seen before. Archuleta is a formidable opponent, but Peralta is a veteran, and this is his chance to chase his dream once again.