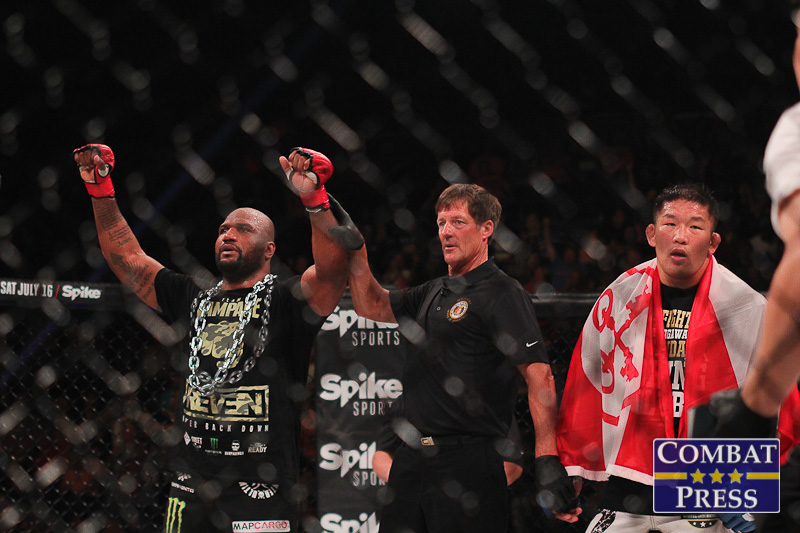 As 2019 comes to a close, Bellator and Rizin have teamed up for a year-end, two-event collaboration. The first event of the cross-promotional extravaganza is Bellator 237, which takes place on Saturday, Dec. 28, and will be followed by Rizin 20 three days later on New Year’s Eve.

The names on the marquee belong to two MMA legends who first became household names in Japan fighting for the now-defunct Pride FC, which was once considered the pinnacle MMA organization. All these years later, the long-reigning Pride heavyweight champion Fedor Emelianenko will take on former Pride middleweight kingpin Quinton “Rampage” Jackson. It is a fight that for years wasn’t on the radar of most MMA fans, with the two veterans competing in different weight classes and in different organizations after the collapse of Pride. Now, with Rampage fighting at heavyweight and both men under contract with Bellator, two favorites of the Japanese MMA scene meet in the main event in Saitama, Japan.

The evening’s co-headliner features former three-time Bellator lightweight champion Michael Chandler against Sidney Outlaw. Originally, the bout was supposed to be a rematch between Chandler and former WEC and UFC lightweight titleholder Benson Henderson, but an injury forced Henderson out of the contest and Outlaw was called upon as a replacement opponent on three and a half weeks’ notice. This is the second outing inside the Bellator cage for Outlaw, who picked up a unanimous decision over Roger Huerta in his first fight with the promotion. It also marks the first bout for Chandler since his lightweight title loss to Patricio “Pitbull” Friere in May. Chandler will look to put a halt to the nine-fight winning streak of Outlaw and move himself closer to a rematch with Friere in pursuit of becoming the first four-time Bellator champ.

Two hard-hitting, highly technical welterweights also fight on the main card, but not against each other. Former UFC contender Lorenz Larkin looks to push his winning streak to four consecutive contests when he takes on 47-fight veteran Keita Nakamura. Meanwhile, Michael “Venom” Page will fight for the fifth time in 2019 when he squares off against Shinsho Anzai. Page looks to make it three straight victories since losing his first professional contest in devastating fashion to current Bellator welterweight champion Douglas Lima.

Bellator 237 goes down inside the Saitama Super Arena. The main card action can be viewed on the Paramount Network or via the DAZN streaming service, beginning at 10 p.m. ET.

Fedor Emelianenko and Quinton “Rampage” Jackson make for an appropriate headliner for a Japanese year-end show. Which fighter wins this spectacle of a fight, and how do they do it?

If this fight goes the distance, Fedor wins a decision. If it ends early, Rampage picks up a knockout victory.

Fedor’s four most recent losses have come by either knockout or TKO. Admittedly, that’s a bit of a skewed statistic, since two of those losses came in 2011. Still, the two defeats he has suffered since joining Bellator in 2017 have come via strikes, first by Matt Mitrione and then by Ryan Bader in the finals of the Heavyweight Grand Prix.

On the other hand, Jackson hasn’t been finished since 2011, when he was submitted in a UFC light-heavyweight title contest via guillotine by Jon Jones. The four losses he has suffered since then have all been by unanimous decision. Rampage did get back on the right track in his last fight, evening the rivalry with Wanderlei Silva with a second-round knockout.

The judges won’t be necessary in the main event. Jackson will stop Fedor before the first round comes to a close. Rampage isn’t exactly known for his conditioning and cardiovascular stamina, and especially now that he is fighting at heavyweight, he will be out to end this one quickly. Combine that with Fedor’s relative inability to take a punch compared to his younger self, and it’s the recipe for a highlight-reel knockout for the American.

Sidney Outlaw has quietly compiled an impressive record. Now, with Benson Henderson sidelined, the rising prospect gets a huge opportunity opposite former champ Michael Chandler in a catchweight affair. Can Outlaw capitalize?

He will capitalize in the sense that he will show that he can hold his own against elite talent at lightweight in the highest-profile fight thus far in his career. Ultimately, however, he will come up short against Chandler.

Outlaw certainly made a statement in his Bellator debut by taking a unanimous decision over Roger Huerta, but the Huerta he faced is a far cry from the Huerta who beat Leonard Garcia and became the first MMA fighter on the cover of Sports Illustrated in 2007. This is a substantial step up in competition for Outlaw, to say the least. Stylistically, Chandler will give him problems, too.

The fight with Huerta gave Outlaw a chance to show off his grappling skills. He implemented his game plan by putting Huerta on his back and controlling the fight from top position. Huerta is no slouch in the wrestling department, but Chandler is a former NCAA Division I All-American wrestler from the University of Missouri. So, while Outlaw will show impressive takedown defense, he won’t be able to complete any takedowns of his own — this fight will largely be spent on the feet.

Standing, the edge in this fight goes to Chandler. Neither man has shown tremendous fight-ending power on a consistent basis. Chandler hasn’t picked up a knockout or TKO victory since his 2016 win in the rematch with Patricky “Pitbull” Friere. Outlaw’s lone TKO win came in his professional debut over Mtume Goodrum nearly seven years ago. With neither man a huge threat to stop their opponent with strikes, Chandler will have an advantage with crisper punches and a more refined overall striking game. He will use these skills to outpoint Outlaw en route to a decision victory.

At age 27, Outlaw is really just entering his athletic prime. He will continue to become a better and more well-rounded mixed martial artist over the next several years. It shouldn’t come as a surprise to fans if he ends up as a Bellator lightweight champion before his time with the promotion is over. For right now, however, he will prove to be just a notch below the cream of the crop at 155 pounds.

Welterweight contenders Lorenz Larkin and Michael Page are set to appear in separate bouts on this year-end show. Is either man in danger of suffering a loss in Japan?

Probably not. These match-ups are understandable with this being a crossover event and taking place in Japan, but it would be much more satisfying to see these two men face off against each other.

Fans have been highly critical of Bellator seemingly protecting Page from top-level opponents, and this match-up seems like a thinly veiled response to that criticism. They can bill this as Venom taking on a former UFC fighter and try to capitalize on Shinsho Anzai’s experience in the world’s premier MMA organization. What the Bellator promotional material won’t say is that Anzai went 2-2 inside the Octagon and lost badly to Jake Matthews in his last fight before his release. So, while Page is indeed taking on a UFC veteran, it’s quite a stretch to consider this fight with Anzai a real test to prove that the Brit is an elite welterweight. This is another showcase fight meant to highlight the dynamic striking skills of MVP, and he should get through it without issue.

Larkin also takes on a former UFC fighter when he squares off against Keita Nakamura. This will be the first fight for Nakamura since his release from the UFC after an eight-fight stint with the organization. That 4-4 stretch was actually the second go-around for Nakamura with the UFC, after a previous three-fight winless stint under the Zuffa banner. Larkin has looked impressive during his three-fight winning streak that followed a knockout loss to Paul Daley in their 2017 grudge match. He most recently picked up a split decision over former Bellator welterweight champion Andrey Koreshkov. This fight with Nakamura will be a stepping stone on Larkin’s way toward a title fight and rematch with champ Douglas Lima.

Haruo Ochi and Jarred Brooks. This fight should be an exciting, all-action contest at flyweight. It’s a rematch of an August scrap that was declared a no-contest following an accidental headbutt shortly after the fight began. The 26-year-old Brooks, who is nine years younger than Ochi, has only two losses on his record, both coming during his time inside the UFC. The first setback was a controversial split decision against Deiveson Figueiredo, who is now set to fight for a UFC title. The second loss came when “The Monkey God” tried to slam Jose Torres but ended up knocking himself out in the process.