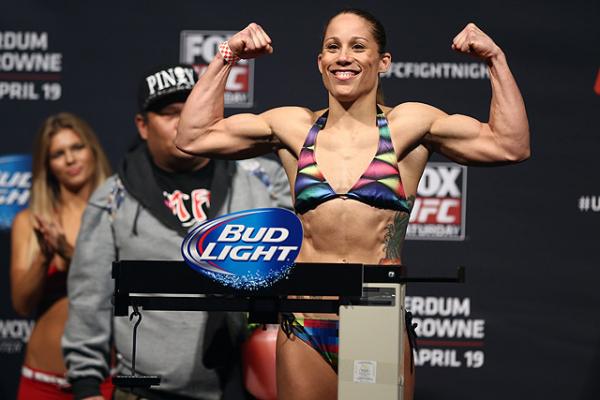 Liz Carmouche Will Make History Yet Again at UFC 205

UFC 205, a monumental step for MMA, is nearly upon us.

It’s the card that will forever go down as the first UFC show to ever be held in the great state of New York. The UFC has not disappointed, either. There are three titles on the line and a slew of other incredibly intriguing match-ups.

While promotional featherweight champion Conor McGregor attempts to enter the record books as being the first man to simultaneously hold two UFC championship belts at the same time when he challenges for the lightweight crown currently held by Eddie Alvarez, another fighter will enter the record books for the second time. That fighter is UFC women’s bantamweight Liz Carmouche.

Carmouche was thrust into the spotlight in 2012 when it was announced that she would stand across from Ronda Rousey and challenge for the UFC women’s bantamweight title in the first-ever women’s MMA bout in UFC history. At UFC 157, which took place on Feb. 23, 2013, Carmouche seemed to have Rousey in a world of trouble. However, she later succumbed to a first-round armbar, courtesy of the champ. Carmouche not only opened the eyes of casual MMA fans to her presence, but she took it a step further when she announced that she was openly gay and a strong member of the LGBTQ community. It was a bold move for the former Marine, who was praised by many for her decision to come out and become the first openly gay UFC fighter.

Since challenging Rousey for the title, Carmouche has compiled a 2-2 record with wins over former Invicta bantamweight champ Lauren Murphy and Jessica Andrade.

Carmouche’s last fight was almost a year and a half ago, though. What better way to step back inside the Octagon then but in a bout in New York against Katlyn Chookagian. Since it serves as the evening’s opener on UFC Fight Pass, it’s a fight many fans likely will not see.

The fight carries a lot more for Carmouche than just another chance to move back up in the division. It’s also the first time that a women’s MMA bout will be held in New York. This creates some added pressure on Carmouche’s shoulders. She’ll be looking to win back-to-back fights for the first time since 2012, too.

Carmouche has a tough test in front of her when she takes on the undefeated Chookagian, who is riding on the heels of her first UFC win, a hard-fought decision over the aforementioned Murphy. This is a must-win for Carmouche, who many felt lost her last fight against Murphy. It’s also a chance for Chookagian to capture a victory over a former two-time title challenger.

The fight between Carmouche and Chookagian has obviously flown under the radar. The prelims are stacked. So is the main card. It’s a big night for the UFC. However, UFC 205 is a big night for Liz Carmouche, too.