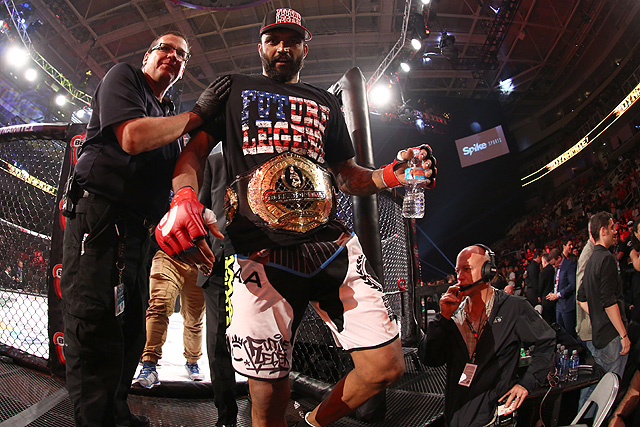 Bellator 163’s main event will take place in the light heavyweight division, where champion Liam McGeary gets his stiffest test to date against former top UFC contender Phil Davis. Davis has been on a roll since switching promotions. Davis won the Bellator Light Heavyweight Grand Prix and defeated Muhammed “King Mo” Lawal in his last fight. After winning the 2014 Light Heavyweight Summer Series, McGeary went on to beat Emanuel Newton for the light heavyweight strap at Bellator 134. McGeary defended his belt against Tito Ortiz at Bellator 142 with a first-round submission victory.

In the evening’s co-headliner, Brennan Ward looks to kickstart another winning streak when he faces Saad Awad. Ward was on a five-fight roll before losing to Evangelista Santos in the first round at Bellator 153. Awad is coming off a loss of his own after dropping a decision to Derek Anderson at Bellator 160.

The main card will also feature another three fights. At the welterweight level, Paul Daley will return to face the aforementioned Anderson. Sergei Kharitonov will look to make a statement in his first fight in Bellator against Javy Ayala at the heavyweight level. Bellator 163 will also head to the women’s side, where featherweight Marloes Coenen will look to bounce back from a devastating loss in her last fight. Coenen goes up against Talita Nogueira.

The Bellator 163 preliminary action airs on Bellator.com at 6:50 p.m. ET. The main card will air live on Spike TV beginning at 9 p.m. ET.

Liam McGeary is Bellator’s undefeated light heavyweight champion. He’s already defeated Emanuel Newton and Tito Ortiz, but now he faces what might truly be the test of whether he’s on par with the top tier of UFC light heavyweights. Can he pass this test, or will former UFC contender Phil Davis humble the up-and-comer?

I have been on the McGeary bandwagon for some time. I have picked him to win his fights and win the belt. McGeary has such tremendous potential that it makes this an incredibly tough choice. I may have to step off the train here, though, as he faces Davis, someone who has a very good chance to wear Bellator gold eventually after signing with the promotion after departing from the UFC.

McGeary should have worked a tremendous amount of time on his wrestling defense in preparation for this contest. Davis is going to turn to his wrestling skills early and often, looking for the takedown and dragging McGeary to the ground. If he’s successful, Davis will win this fight with relative ease. It doesn’t matter if he only secures the takedown once in each round, the effect of each takedown will be seen. McGeary will be drained of his energy and fade in the later rounds. Davis can take this approach against some of the best light heavyweights on the planet. The question is whether or not McGeary is even up there.

The reigning champ should certainly have the advantage on the feet. He has significant power if he can land. McGeary also arguably holds the edge in the submission department. He will create a tremendous amount of problems for Davis off his back, especially if Davis makes mistakes. McGeary isn’t perfect. He has missed some easy submissions against prior opponents that a lot of fighters would have finished, but the Brit almost always seems to be in position to finish the fight.

Davis is very determined to get the takedown, but McGeary needs to counter off of his back and make Davis fight to keep him down.

Davis is the easy and smart pick in this fight, given his background as one of the better light heavyweights on the UFC roster. He’s a big fish in a relatively small pond in Bellator’s light heavyweight division. His wrestling has proven the bane of many a fighter’s existence. Davis isn’t the most entertaining man to watch, but his style gets the job done.

Marloes Coenen and Talita Nogueira meet in a women’s featherweight bout on the main card. Coenen has been a fixture of the division for years, whereas Nogueira is an undefeated six-fight veteran who has not fought since 2013. Is this a rebound fight for Coenen, who suffered a loss her last time out, or a coming-out party for her Brazilian counterpart?

Coenen’s last fight was highly disappointing after how dominant she had been in her previous Bellator outings. Her loss to Alexis Dufresne is a huge deal. Coenen was not only the favorite by far to win the fight, but also a huge favorite to become Bellator’s women’s featherweight champion. It seemed to be a foregone conclusion. Then Dufresne wrecked those plans.

This has to be a rebound fight for Coenen. She is coming off a loss and faces a fighter who hasn’t participated in MMA in three years. That is the pretty obvious basis for any rebound fight. If Coenen were to lose, there should be some serious contemplation on her part afterwards.

Nogueira is going to fight Coenen’s game in the grappling department and will be more than happy to battle this out on the ground. The fight is tailor made for Coenen to get back in the win column and make her march toward an eventual belt-crowning ceremony. Bellator needs Coenen to come out on top, too. This isn’t just a one-sided “she needs a win” fight. The promotion has sunk in a great deal of investment into building a division behind Coenen. The company has put Coenen on the main card instead of some other good fights that could have easily slotted in and looked great on television. The women’s featherweight division isn’t exactly a big-numbers draw.

The Dufresne fight should be the exception to the rule. Coenen isn’t generally that fighter. She doesn’t make egregiously bad mistakes on the ground and get submitted by fighters she should beat. Coenen has been one of the best featherweights on the planet for some time, and it should show here when she claims another submission victory.

Sergei Kharitonov will finally make his Bellator debut after his initial debut was scrapped from May’s Bellator 154 card. Is Kharitonov set to make waves in the division? How long before he claims the Bellator belt?

Kharitonov has a good shot to make waves in the heavyweight division based solely on skill, but also since there really isn’t all that much in front of him to stand in his way of conquering the weight class. This is even despite the fact he hasn’t fought in well over a year and has only fought once a year — except in 2014, when he fought twice — since losing to Josh Barnett in 2011. He has only had five fights in the span of almost six years. The quality of these opponents isn’t really up to par with the guys Kharitonov has beaten in the past, including Alistair Overeem, Fabricio Werdum and Andrei Arlovski.

Kharitonov is a good, strong fighter with the power to knock out a lot of heavyweights. The 36-year-old certainly has the names on his record to suggest he will get the title, and the division lacking a supply of opponents that could challenge him. It’s a matter of time until Kharitonov gets a title fight.

Ayala is the first step in Kharitonov’s quest, but he isn’t likely to be too much for the Russian. This could quite possibly serve as an exhibition of how good Kharitonov could be. It’s a warm-up fight, if you will. Kharitonov has the strength and size advantage against Ayala, and he will use it to exercise his striking and continue his five-fight winning streak.

Bellator has kept the heavyweight belt vacant for some time since stripping Vitaly Minakov in May for lack of defenses. That is almost six months now, and there hasn’t been much on the participants for the first title post-Minakov. Kharitonov could enter the picture with a successful showing.

We haven’t discussed it so far, but it should be touched upon. Brennan Ward and Saad Awad will be fireworks. Ward was well on his way to the top of the welterweight division before meeting Evangelista Santos and having his four-fight winning streak snapped. Ward is known for being a finisher — 12 of his 13 victories ended by either knockout or submission. Awad likes to go for the finish as well — 15 of his 19 victories came by knockout or submission. This fight is going to end in a big finish from one of these fighters. It should be an entertaining scrap before it concludes.