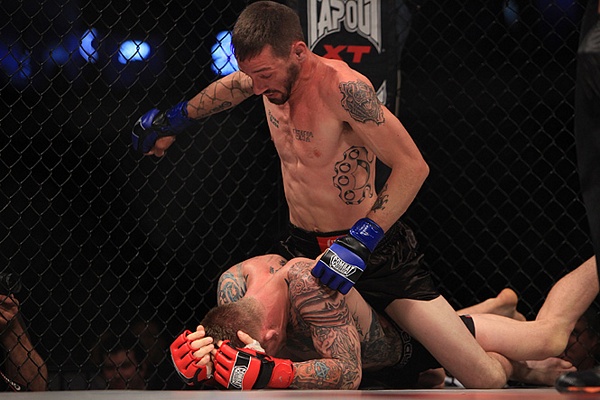 The eyes of the MMA world will be firmly focused on UFC 202’s showdown between Conor McGregor and Nate Diaz this weekend, but the Resurrection Fighting Alliance serves up the equivalent of the weekend’s MMA appetizer on Friday. The promotion’s 42nd offering features a headlining bout between Christos Giagos and Arthur Estrázulas, but the flyweight co-headliner might provide the top prospect from the lineup. Ray Elizalde remains undefeated through 10 professional appearances, but he’ll be put to the test when he clashes with Alex Perez.

Elizalde has been fighting professionally since 2011, but the majority of his fights have come since 2013. “The Bloodhound” started out on the California regional scene and has competed under the Xplode Fight Series banner. The 27-year-old has seen the scorecards on a couple of occasions, but he tends to be a finisher. Elizalde, a Blackline MMA product, has four wins by some form of knockout and four submission finishes. He has five first-round stoppages, including two fights that ended in the first 30 seconds. He made his promotional debut for the RFA in June at RFA 38, where he scored a third-round TKO of Richard Alarcon.

Perez has been a mainstay of the California-based Tachi Palace Fights organization, where he has competed as a bantamweight and flyweight. “The Decision” has held the Tachi flyweight title, which he captured with a win over Anthony Figueroa and lost to Adam Antolin. The 24-year-old debuted in 2011 and won his first three pro bouts. After suffering back-to-back losses, Perez turned his career around by winning 10 straight, including his title scrap with Figueroa. Perez’s loss to Antolin was his first defeat in almost four years, but he stumbled again in his next outing against Jared Papazian. This is Perez’s first fight since the Papazian loss. The Team Oyama export’s nickname is indicative of his typical method of victory. He has only stopped six opponents — three by knockout and three by submission — whereas he has won by decision on seven occasions.

Perez is a tough veteran, but he has suffered three submission losses. He’s vulnerable on the ground, and that’s a significant part of Elizalde’s well-rounded attack. The undefeated up-and-comer is an aggressive striker, but he’s also a strong wrestler with powerful takedowns, a low center of gravity and a smothering top game. He’ll go for his opponent’s legs and use his low center of gravity to leverage his adversary to the mat. Once on the ground, Elizalde can punish opponent’s with heavy ground-and-pound, transition to mount with ease and hunt for submissions.

Perez has to find a way to turn this into a points battle on the feet. Elizalde has plenty of knockout power, but he can get wildly aggressive on the feet and open himself up to counters. Perez can tag Elizalde during these exchanges, but he’s going to be busy fending off Elizalde’s level changes and takedown attempts. If Elizalde starts getting hit too often, those level changes will come more frequently. On the ground, Perez’s weak submission defense could cost him the fight.

The biggest question for Elizalde remains if he’s for real. That question will follow any fighter who compiles a shiny undefeated mark while fighting for the Xplode Fight Series, which has been criticized for its lopsided matchmaking efforts. So far, the Blackline MMA fighter has proven that he is as good as advertised. His victory over Alarcon, a 2-0 prospect, was a good start. Now, though, he has to step up against a former Tachi flyweight champ. It’s a much bigger challenge, but Elizalde has the skill set to get the job done and record another submission finish.

The UFC’s latest edition of The Ultimate Fighter, featuring a collection of flyweight champions from around the world, is on the horizon. It’s an ushering in of the next wave of 125-pound contenders. Meanwhile, Absolute Championship Berkut has paired two men who are still a few steps away from the big leagues to fight for the organization’s flyweight crown. Those men are Fight Club Berkut teammates Velimurad Alkhasov and Rasul Albaskhanov.

Alkhasov is the undefeated fighter in this match-up. Since debuting in 2014, he has handed out the first losses on the records of Elnar Ibragimov and Aleksey Pastorov, fought to a split verdict against veteran Mikael Silander and dropped 19-5-1 prospect Ruslan Abiltarov. His victory over Abiltarov came in the finals of the ACB flyweight tournament. Alkhasov has stopped two opponents via strikes and one for by way of submission. The flyweight upstart is a national champion in sambo in his native Russia.

Albaskhanov lost his 2014 pro debut by submission, but he has bounced back with five straight wins. As a bantamweight, he scored two first-round submission finishes. He shifted to flyweight and continued to find success with another two submission victories. His most recent fight, an ACB 31 clash with 20-fight veteran Isaac Pimentel, went the distance. Albaskhanov has a solid wrestling game, and he prefers to attack his opponent’s neck.

These two fighters still have a lot to prove, but they’re off to a strong start with recent wins over veteran opposition. Alkhasov tends to prefer a stand-up fight, whereas Albaskhanov wants to get fights to the ground and lock in a choke submission.

Alkhasov is probably well versed in Albaskhanov’s takedown game from their time as teammates. He’s going to stay on the outside, stuff submissions and land counters. It should be a close and competitive fight, but the nod goes to the undefeated Alkhasov.

Dynasty Combat Sports is billing the headliner of its 28th event as a battle between “the prospect” and “the veteran.” The bantamweight clash is the only pro fight listed for the event, and it features undefeated upstart Ryan MacDonald against 17-fight vet Chad Obermiller.

The 23-year-old MacDonald has only been fighting professionally since 2015, but he has an extensive record as an amateur. The problem is that he only went 8-4 during his time as an amateur. MacDonald has turned in more consistent results since turning professional. He stopped Baron Muller in the first round of his debut fight. In his sophomore outing, MacDonald edged rookie fighter Jorge Serrano on the scorecards. His next two fights marked a small step up in competition and resulted in a decision win and a submission finish.

Obermiller, whose record stands at 10-7, is the most experienced and successful fighter that MacDonald has encountered as a pro. The 36-year-old has been a member of the pro ranks since 2009. Despite his 17-fight resume, Obermiller has never strung together more than three wins in a row. That streak came in 2010-11 when he topped Steve Greise, Derek Rhoads and Josh Knight via choke submissions. His most notable achievement, however, was a 2013 victory over Darrick Minner. The Hard Knocks Gym product has made two appearances, both losses, under the RFA banner.

“Obie” might not be a big name or a very successful fighter, but he’s a giant leap for the young MacDonald. The Top Tier MMA and Boxing export’s amateur record stands as a huge red flag. If a fighter can only scrounge together an 8-4 mark while fighting amateurs, he’s going to have his work cut out for him as a pro. MacDonald’s 4-0 mark looks great at first glance, but Obermiller should have what it takes to end MacDonald’s prospect run.