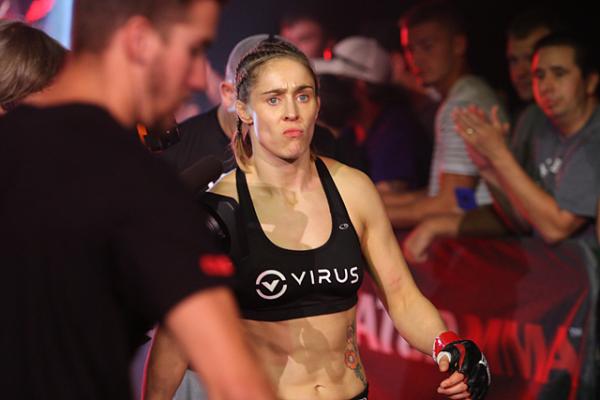 Righting A Wrong: Bellator MMA Must Give Women’s MMA the Spotlight

Albert Einstein reportedly asked his friend and fellow physicist Niels Bohr whether he realistically believed that the moon does not exist if no one actually looks at it.

Bohr replied by telling Einstein that he couldn’t prove that it does exist, thus subjecting mankind to a riddle that can’t really be solved.

If you want to frame this philosophical debate in mixed martial arts terms, you could ask this question: do women’s fights exist in Bellator MMA if no one actually watches them? Well, if you asked me this question before yesterday, I probably would have answered, “Maybe?”

However, Budd had to withdraw from the bout due to injury. It may have been a blessing in disguise, as Bellator received criticism for originally putting one of the pioneers of women’s MMA on a streaming preliminary card when fighting for a title:

Bellator puts an Anastasia Yankova showcase fight on TV but not the featherweight title bout between Marloes Coenen and Julia Budd. Okay.

So it’s possible this decision to elevate Coenen/Dufresne to the main card smells of Bellator listening to the masses and realizing that a decorated veteran deserves better treatment than being part of a stream that’s watched by very few people — I’m pretty sure even the most ardent Bellator fan probably skips the streaming preliminary card more often than not — even if her fight is no longer for a title.

Not only does Coenen deserve better, but it’s in Bellator’s best interest to feature her and other female fighters as the organization continues to grow. It needs not look any further than the biggest dog in its yard, the UFC.

The UFC was already in a rapid ascent of popularity in 2013 when the company introduced Ronda Rousey as its first women’s bantamweight champion. But Rousey took the UFC to new heights and helped to introduce other female fighters to a global audience, including Miesha Tate, Holly Holm, Cat Zingano and Joanna Jędrzejczyk.

Although the UFC has the majority of the high-profile female fighters under its banner, Bellator is making inroads in this area. The organization recently signed female flyweight fighter Anastasia Yankova, who won her Bellator debut last month. It’s not hard to see why Bellator wanted to bring Yankova, a highly skilled and decorated kickboxer, on board:

Yes, sex still sells. Obviously, fighters like Rousey, Tate, Zingano and Yankova are exceptionally talented. But being photogenic can only help their cause. The UFC has increasingly put the onus on female fighters, despite Rousey’s seemingly invincible aura being shattered in her first career loss last year. You could argue that women’s MMA in the UFC has never been more interesting, even with Rousey still on hiatus following her defeat at the hands of the aforementioned Holm.

Bellator is taking baby steps by featuring Coenen on its next card and signing fighters like Yankova, but it still has much work to do. A female flyweight bout between Jackie Vandenburgh and Veta Arteaga is still stuck on the Bellator 155 preliminary card. Wouldn’t it be nice for fans to see who could possibly face Yankova next? Bellator seemingly plans to build a women’s flyweight division around her, much like the UFC did with Rousey and the women’s bantamweight division. Shouldn’t that result in a greater spotlight being shined on her adversaries?

Bellator has generated considerable buzz and television ratings over the last couple years by featuring “special attraction” fights with fighters like Kimbo Slice, Ken Shamrock, Royce Gracie, Dada 5000, Tito Ortiz and Stephan Bonnar. But fights where the two participants are clearly past their prime or made their living fighting in backyards will only take the organization so far.

The continued development of its roster of homegrown talent like Michael Chandler and Daniel Straus and pursuit of key free-agent signings like Josh Thomson and Benson Henderson can take Bellator to new heights. But the ladies deserve their chance to show what they can bring to the table, too. It’s up to Bellator President Scott Coker and company to give them the platform and let them shine.