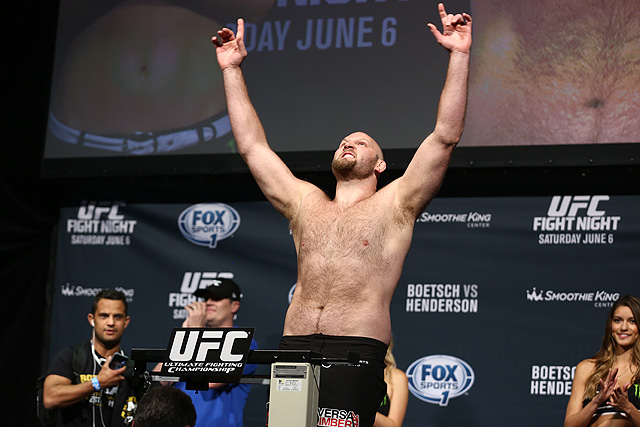 On Saturday, April 9, the UFC will host the weigh-ins for UFC Fight Night 86: Rothwell vs. dos Santos which takes place Sunday, April 10, from the Zagreb Arena in Zagreb, Croatia.

In the night’s main event, former heavyweight champion Junior dos Santos will clash with the red-hot Ben Rothwell. The Brazilian dos Santos will look to rebound from a second-round TKO loss to former Strikeforce titleholder Alistair Overeem in December. The 32-year-old has alternated wins and losses since 2012. Rothwell, meanwhile, enters the contest having won four straight and five of his last six. All five wins have come via finish, including a guillotine choke submission of Josh Barnett in January.

More heavyweights will be in action in the night’s co-main as former title challenger Gabriel Gonzaga clashes with the hard-hitting Derrick Lewis. The submission ace Gonzaga snapped a three-fight skid in December with a decision win over Konstantin Erokhin, while Lewis picked up his second straight finish in February, stopping Damian Grabowski.

The fighters will hit the scales at 11:30 a.m. ET on Saturday. A live video feed appears above (courtesy of the UFC), while the results appear below.