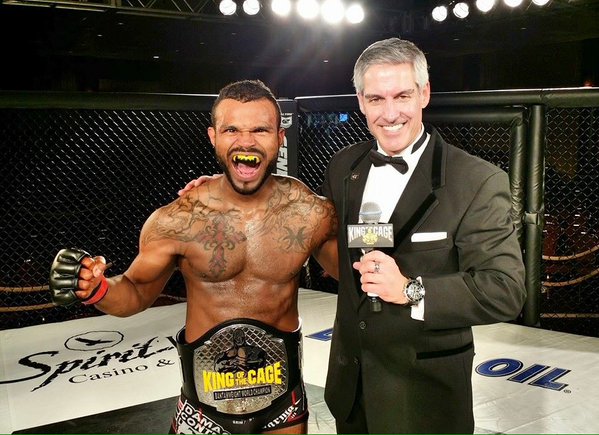 As a champion, you can go a long way in MMA. This has been showcased by the many men and women who have captured regional titles and moved on to the big leagues. Most fighters dream of a day when the UFC, Bellator or another major organization comes calling their name. It’s where the money, fame and notoriety can be found, and it makes life easier on the group of men and women who grind and struggle every day.

King of the Cage currently has a charismatic, dangerous featherweight champion atop its 145-pound ranks. That man is Jordan Griffin, a 12-4 prospect who is currently tearing the Midwest regional circuit to shreds. Griffin, an athlete and physical specimen, has combined natural gifts with an absorbent learning style to become one of the better featherweight prospects in the United States.

I first met Griffin in college. He was friends with some of my college friends. He seemed like your normal, everyday dude. When I found out he was a pro fighter, we clicked on another level. There were endless conversations about MMA, especially the nitty gritty about the regional scene. Partying and talking about fighting seem to always go hand-in-hand.

Fast-forward to 2016. It had been about three years since I had seen Griffin, but I would occasionally drop him a line to talk about his career. When I met him in 2013, he was a struggling, young fighter boasting a 4-3 record, admittedly against tough competition he may not have been ready to handle at the time. Now, Griffin is using drastic improvement and experience from those tough early fights to make himself better. It’s what has made him as good as he is today.

I was in Milwaukee for St. Patrick’s Day weekend, so I decided to track Griffin down for an interview. I met him at the gym where he works, a small fitness center in a rustic old warehouse that is becoming a happening business spot. He showed me the gym and walked me through his daily grind.

“When I’m not training at Roufusport or getting myself ready for a fight, I’m working,” Griffin said. “I have a steady clientele that I see every week for personal training. When you’re not in a top promotion like a UFC, you have to work on the side to survive. Luckily, I can work in fitness, which allows me to get in better shape than I’m already in. And I love it.”

We decided to grab a bite to eat at a local sit-down burger joint and talk over a beer. The topics ranged from the impending Conor McGregor fight that Saturday to Deadpool to crazy stories from our youth. As writers and MMA fans, we often forget one key principle about fighters: they’re human too. They are just like everybody else, except their profession requires face punching and armbars.

When we got down to business, though, you could tell Griffin was in his world. This guy’s passion about MMA is evident in the way he breaks everything down. He talks about King of the Cage and how the company is trying to make him a star. The promotion strategically places him on certain cards, knowing that he may be able to draw more in certain spots.

“I was supposed to fight in March in Wisconsin, but it got moved to April in Minnesota,” Griffin pointed out. “I think it’s because people know me there from knocking out Ben Pierre-Saint there. I will be at random shows there where I am not fighting and people will recognize me. They’ll be like, ‘Hey, you’re that dude that kicked that other dude in the head.’ It’s also funny because I am not even a Minnesota native, but I have been fighting there for the last three years or so. Early in my career there, I fought behind a casino in a tent. So I’ve been fighting in all the grimy places.”

Those grimy beginnings paved the way for bigger opportunities, such as his current spot with King of the Cage and a fight with the Resurrection Fighting Alliance. Why has Griffin improved so quickly? Griffin credits his gym and the guys he currently runs with.

“I train a lot with Erik Koch, Chico Camus, Jay Pressley, Raufeon Stots, Sergio Pettis, Emmanuel Sanchez, Nate Jennerman, Joshua Marsh and others, so I have a great little clique around me,” said Griffin. “We’re all around the same size, so we get great training with one another. When Anthony Pettis is around, I will work with him too, but his injuries had kept him out of the gym for a while.”

Griffin also has great guys training him, from Duke Roufus, to jiu-jitsu coach Daniel Wanderley, to wrestling star Ben Askren. It’s why he’s been able to become so well rounded so quickly. It’s brought him to the champion status he currently holds.

The gym has also gotten further attention because of the arrival of a certain former WWE champion named CM Punk. Griffin knows that questions about Punk are always inevitable, but he doesn’t mind answering them. In fact, a certain positivity comes about him from knowing that Punk is a good guy and positive addition to the gym.

“It’s crazy. I had CM Punk texting me ‘Happy Birthday,’” Griffin said. “He shows up an hour or two early to the gym and just gets to work. He’s improving a ton. I am very impressed with him and his work ethic. He’s a good guy to have in the gym.”

Adam Ward, a respected journeyman that has seen his fair share of successes, is next on Griffin’s plate. It’s a solid little fight that King of the Cage has slotted to headline its April 8 card in Minnesota. Ward has given many men trouble, but Griffin sees this fight as just another day at work. He anxiously looks forward and strategizes openly at the table.

“I change my game up with every guy I fight,” said Griffin. “I see things that I need to watch for. Ward drops his hands a lot and gets tired, but he’s tough as nails. He goes to decisions a lot, so he’s definitely a grinder. I’m different. I’m scrappy and he won’t be able to hold me down. I’m going to use his own game against him. My hips and my wrestling are too much for him, and he won’t intimidate me with his pre-fight antics.”

Griffin seems almost at peace when he seamlessly talks about getting in that cage. Every time he mentioned Ward or the upcoming fight, you could see that fighter’s itch in his eyes. He is raring to go and get his hands on Ward, hoping that another belt defense brings him to bigger and better things.

“I want to keep finishing fights, because that will catch the UFC’s eye,” Griffin admitted. “I plan on being in this game for many more years, and I want those years to be at the pinnacle of the MMA world, which is the UFC. I’m not going to do that by fighting safe. I come to finish fights.”

Griffin isn’t kidding. With highlight-reel finishes in his last three bouts, it’s hard to imagine that he’s not on the radar of UFC matchmaker Sean Shelby. That’s why Griffin continues to plug away at fighter after fighter. He knows flash and killer instinct will trump guys who grind wins away and put audiences to sleep.

We finished our food, drank our beers and went on our separate ways, almost two hours of MMA talk still saturating in my head. What does tomorrow bring for Griffin? He hopes, as do his fans, that it brings that aforementioned money, fame and notoriety.