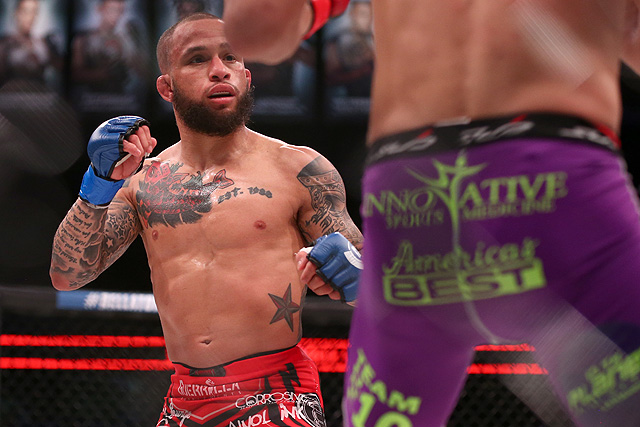 Out of Obscurity: KOTC, Pinnacle Combat 29 and Combate 24

The atomweight division isn’t exactly deep on talent, and some of its established stars are entering the twilight of their respective careers. This means that any potential prospect, even one who only has one professional bout under her belt, deserves a look. This brings us to Shawna Ormsby. The 26-year-old is back for her sophomore effort, which takes place under the King of the Cage banner against seven-fight veteran Melissa Karagianis.

Ormsby’s undefeated pro record, however, is quite misleading. Yes, she won her pro debut. Yet, the win, a unanimous decision over Kelly Vilarino, came against a foe who was winless through her first three professional bouts. Then, there’s the amateur numbers for “Bam Bam.” The Florida-based fighter won just one fight in seven attempts. Three of her ammy fights, including her lone win, ended in split decisions. She also went the distance in an additional three defeats. Ormsby was stopped via strikes in her additional loss.

Given her losing record, the 30-year-old Karagianis might look like another easy fight for Ormsby. This, too, would be a bad assumption to make. The Canadian fighter has been competing professionally since 2015, when she eked out a split decision over KOTC fixture and recent Rizin fighter Andy Nguyen under the CUFF banner. “Magic” added a win over Tushara Veerella in her second pro contest before facing setbacks against Jayme Hinshaw and Cynthia Arceo. Karagianis scored another decision win over Nguyen, this time for the KOTC’s 105-pound crown. The reign was short-lived, though, and came to an end when she was submitted by the aforementioned Hinshaw in late 2017. The Grant’s MMA disciple stumbled yet again in her Rizin debut when she lost to rising atomweight star Kanna Asakura.

Karagianis isn’t exactly a member of the atomweight elite, but she has shared the cage and ring with some legitimate talent. A glance at Ormsby’s record reveals the exact opposite. Beyond an 0-3 pro opponent, Ormsby suffered at least one embarrassing defeat against a sub-.500 amateur opponent. She did meet Lindsey VanZandt when both ladies were amateurs, but otherwise competed — and usually lost — to rivals who never went pro.

Ormsby appears to be another atomweight who brings us hope of an injection of fresh talent into the division, but who will also ultimately fall flat. Perhaps her struggles as an amateur will serve as learning experiences that make her a much-improved pro, but that’s not very likely. If Ormsby couldn’t get past low-level competition before turning pro, then it’s doubtful she turns things around now. She’d probably be in line for a title shot of her own with KOTC if she gets past Karagianis, but the veteran and former champ should grind out a victory of her own here and bring her record back to the .500 mark.

This week’s dearth of mid-major events from promotions like the Legacy Fighting Alliance allows us to focus on a couple of fighters in the embryonic stages of their careers. In addition to KOTC’s Ormsby, this list includes Pinnacle Combat flyweight title hopeful Jeff Jepsen. The undefeated upstart tangles with grizzled veteran Nate Williams for the gold on a card that also features UFC and Bellator veteran Eric Wisely in a lightweight title tilt.

The 29-year-old Jepsen has a far better resume than the aforementioned Ormsby, but it’s still not all celebrations and smiles. He had a short amateur run from 2008 to 2010 in which he competed — and lost — once per year. After a hiatus, Jepsen continued his ammy run in 2015 with better results. He won seven of his remaining nine amateur affairs. Five of those wins came via stoppage. The Iowa-based fighter turned pro in 2017 and scored a first-round finish over fellow rookie Alex Gonzalez. He added a first-round submission of 0-5 fighter Sean Johnson in early 2018. Jepsen’s next fight went to the third round before he polished off Edgar Flores with strikes. In his most recent fight, Jepsen appeared under the Extreme Challenge banner and decisioned sub-.500 fighter Chris Johnson.

Williams brings a long pro run to the cage. The “Teddy Bear” has taken part in 45 fights and won 27 of those encounters. The 30-year-old has been fighting at the pro level since 2008, but he’s been far busier than his upcoming opponent. Williams has had a roller-coaster career that kicked off with four wins, but has since featured skids of as many as four consecutive losses and streaks of as many as six straight wins. The only name in his win column that will ring a bell with MMA fans is that of Joe Pearson. Meanwhile, the Team Bad Intentions product has suffered losses to the likes of Zach Makovsky, Louis Gaudinot, Carson Beebe, Chico Camus and Sean Santella.

Williams isn’t a top-tier flyweight by any means, but he is a seasoned veteran with experience against UFC-caliber opponents. He has been vulnerable primarily to submissions, but he’s also been responsible for coaxing plenty of tapouts, too. He could be a threat to Jepsen based on his combination of experience and grappling prowess.

Jepsen’s initial three losses on the amateur circuit came by way of submission, but he has seemingly shored up that part of his game since returning in 2015. His two more recent ammy losses came on the scorecards, and he’s been perfect as a pro, albeit against soft competition. He’ll be tested tremendously by his veteran opponent. Jepsen might manage to hang on to the final bell, but he’ll face adversity at every turn and end up on the wrong side of a decision against Williams.

Combate Americas keeps the spotlight to itself on the mid-major circuit this weekend. The company heads to Tucson, Ariz., for its 24th event. The lineup isn’t quite as deep as some of its past offerings, and it lost its headliner between Erik Perez and John Castañeda when Castañeda came down with a staph infection, but it does feature several prospects, including bantamweights Mario Bautista and Juan Pablo Gonzalez.

Bautista is an undefeated up-and-comer with five pro victories to his name. The 25-year-old posted a 6-1 mark as an amateur, with the lone loss coming against current Bellator fighter Joshua San Diego. The MMA Lab export made his professional debut in 2017 and came away with an 88-second finish of Jesse Orta. He has gone on to add three submissions and a doctor’s stoppage to his resume while facing increasingly better opposition. Bautista made his last two appearances in the Legacy Fighting Alliance, where he competed in bouts featured on the main card.

Gonzalez is an Argentine fighter competing out of the Picante Fight Club. The 33-year-old debuted in 2011 and rattled off three victories to open his career. Over his next three fights, “El Molo” managed just one win and two draws. He won his next three fights before finally hitting a snag this year when he dropped a decision to his Combate Estrellas 2 foe, Kevin Garcia. Gonzalez did engage in immediate rematches with both opponents who took him to a draw, and he won both of those rematches. He does have two knockouts, including one via doctor’s stoppage, on his pro resume, but Gonzalez tends to be a grinder.

Perez and Castañeda made for an intriguing headliner, but these prelim-card bantamweights also make for an interesting pairing. Bautista has already proven himself to be an effective finisher, and he’s seen some time in the LFA. Gonzalez, meanwhile, is no easy out. However, Gonzalez’s recent loss to Garcia is troubling. Garcia is just 6-2 and had yet to beat anyone who carried a pro win before he tangled with Gonzalez. If Gonzalez could supply Garcia with a win, then it stands to chance that he’ll be somewhat easy prey for Bautista.

Against Devon Chavez under the Tachi Palace Fights banner, Bautista flashed some impressive skills. He is great at using one threat to open up other opportunities. Early in the fight, he unleashed a flurry of strikes that caused Chavez to cover up, which allowed Bautista to change levels and score a takedown. On the ground, he used a kimura attempt to slyly transition to Chavez’s back. Bautista is an aggressive ground fighter and wrestler who never lets up on the pressure.

Garcia was able to draw Gonzalez into a fire fight, and Gonzalez’s tendency to swing with wild abandon or charge forward will leave him open to takedowns. Given Gonzalez’s miniscule finishing rate, his punches likely lack the power to finish the job. Gonzalez doesn’t seem to have the polish of his opponent in the stand-up, and he lacks the discipline to stay off the mat. Bautista should score takedowns regularly and eventually sink in a fight-ending submission.