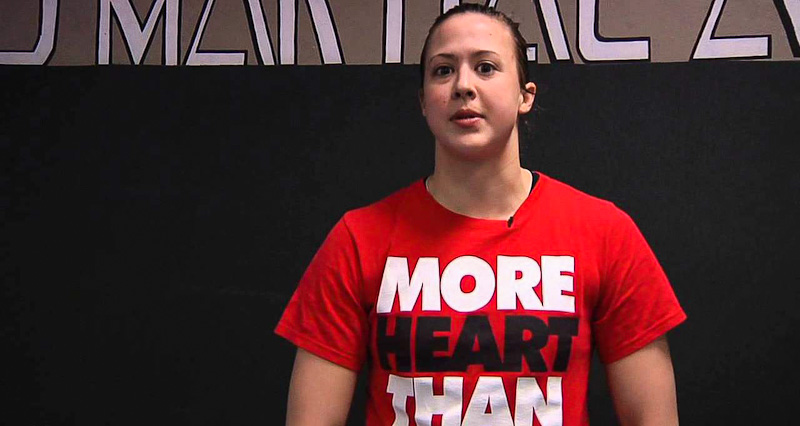 Heather Bassett: Choosing When and Where to Use Her ‘Handguns’

There are a few fighters who have never turned down a fight. A lot of the old-school fighters had that mentality. Anytime, anybody, anywhere. Drew Fickett, Donald “Cowboy” Cerrone, Tonya Evinger. These are folks that will fight up a couple of weight classes just to have the opportunity to fight. Heather Jo Bassett is cut of this same cloth.

As a professional MMA fighter, Bassett has a respectable record of three wins and two losses. But look at who those losses came from and the respectable record becomes more impressive. Bassett has gone back and forth from 125 to 135 pounds. Even though she is a very small 135er, she agreed to fight the transgender Fallon Fox when no one else would.

“I have never been afraid to fight anyone as an amateur or professional,” Bassett told Combat Press. “But that isn’t always the best approach, so that is where Jay [General], my manager, comes in. I don’t regret taking those fights, because I gained a lot of experience, but I pushed myself further than I needed to. I wouldn’t change those experiences, but he is here to help me be more selective.”

Bassett’s last fight was took place in November at a weight of 125 pounds. She soundly defeated Taylor Turner by first-round rear-naked choke.

“I expected the fight to go longer,” said Bassett. “I trained for the whole fight and, I don’t know, you kind of want to be in there a little longer. You want to be able to showcase what you can do. When you put so much into the training camp, it’s almost a letdown for both competitors to have it end in the first round.”

In high school, she was a runner and a cross-country skier with no dreams of punching or being punched. But a friend of hers fought, so she went to watch. Later, she started training Brazilian Jiu-Jitsu to stay in shape.

“Jiu-jitsu is my favorite part of fighting, but not as much as it used to be. Everything in my game has come up,” said Bassett. “I still train in the gi sometimes, and it makes me sad to not be able to do tournaments due to timing. But once I am done fighting, I would love to do more tournaments.”

It might be quite some time before that day comes. Bassett has a fight lined up with King of the Cage for Feb. 20. Her opponent is still to be determined. She will be competing at 125 pounds again and likely staying in the flyweight division.

“I am a small 135er; 125 is a harder cut for me, but I am more comfy there,” she said. “One of the most important aspects for a long career is cutting weight the healthy way. With my diabetes, it’s always been a challenge and always been important to me. Working with Mike King, the former UFC fighter, is making a huge difference. I’ve given him control of my diet and nutrition.

“I took a year off due to injury. I let things get out of control, but he is tweaking things to work with my diabetes and me. Last camp was my first time working with him, and the cut went perfectly. I knew I needed help, and Jay put me in contact with Mike. It’s a great thing.

“Fight camp isn’t much of a change from normal training. Everything is more fight-specific. It’s a lot of back to basics and working new things and every aspect. There is an overall intensity and focus that you just can’t maintain all year, but it’s really the same.

“It’s important to be able to switch gears. You can’t go at a high level all the time. There is a professional balance that is important for each fighter to find. Some fighters are going to need time after a fight and some want to get right back in the gym. I feel it’s very important to listen to your body and listen to yourself. It’s a personal thing and might change with certain fights, too.”

Working with King wasn’t the only thing Bassett did differently in her last fight camp.

“Tonya Evinger flew in for my last camp, too,” said Bassett. “She was awesome! I used moves against Taylor that Tonya taught me. It was great to work with her one-on-one. She actually showed me some of her secret moves. She wasn’t in training camp at the time, so for someone on her level to come out, and just her willingness to help, it was awesome.”

Much was made in the media when Rose Namajunas shaved her head. But Rose wasn’t the first fighter to shave her head recently. Bassett wanted to raise awareness for cancer research and so she shaved her head for St. Baldrick’s Cancer Research in Fond du Lac, Wis.

There is one other thing fans might be surprised to learn about Bassett: She didn’t quit her day job. She gets all her training in during the morning and in the evenings. Meanwhile, she works for Spancrete, which helps her pay her bills and pay for the experts who are helping her take her skills to the next level.

No matter who she is facing or who she will face, Bassett will give her all. And don’t blink, because as much as she would like to show you all she can, most fighters just can’t handle it.

Heather would like to thank Unified Martial Arts, Jay General, Mike King, Tonya Evinger and Spancrete for allowing her the flexibility to follow her dreams and compete in the sport she loves. Follow Bassett on Twitter: @heatherbassett
Advertisement