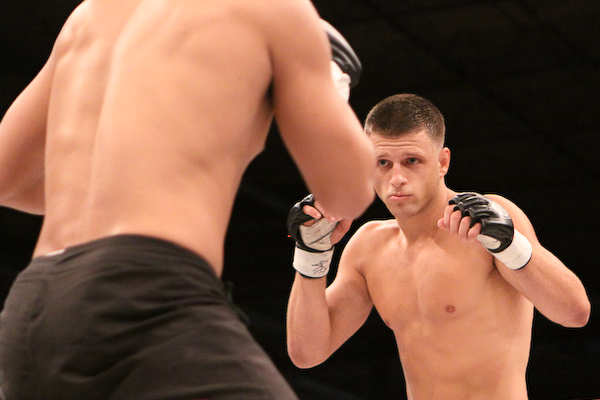 Out of Obscurity: CES MMA 34, Eternal MMA XVI and SCC

Calvin Kattar is a 28-year-old striker who is returning to the sport after a nearly three-year absence. “The Boston Finisher” has finished nine of his 14 career victories, falling short just twice, with a split decision loss to Bellator veteran Don Carlo-Clauss and a submission loss at the hands of Ring of Combat lightweight tournament champion James “Binky” Jones.

The tall featherweight — he stands 5-foot-11 — has fought much of his career in the New Hampshire-based Combat Zone promotion. Before Kattar stepped away from the sport, the impressive youngster, who debuted in MMA at the age of 20, put together an impressive resume of wins. He left the sport on a six-fight winning streak and having won 11 of his past 12 outings. Kattar holds victories over Bellator and World Series of Fighting veteran Saul Almeida, ONE Championship vet Cody Stevens and rising Brazilian prospect Gabriel Baino in his most recent outing.

Kenny Foster is most known for his time spent with Bellator. The 30-year-old grappler from New York racked up seven wins and just two defeats before getting the call-up for Bellator 33 in 2010. “The Tooth Fairy” earned the judges’ scorecards against Lester Carlow to successfully debut under the Bjorn Rebney-run Bellator. Foster submitted the previously undefeated Eric Larkin in the quarterfinals of the Bellator season-four featherweight tournament in March 2011. That was the last prolonged success Foster would see the rest of his Bellator and regional career.

Foster dropped his next bout to the now-current Bellator featherweight champion Daniel Straus. Straus was a near impossible obstacle to pass, locking up a guillotine choke with just a minute left in the third and final round. Foster moved on to finish his Bellator career with three wins and five losses. The Team Bombsquad fighter added victories over Jay Haas and Andy Main, but he fell short when attempting to capture the Cage Fury Fighting Championships and Ring of Combat featherweight titles.

This pairing at CES MMA’s 34th show should be a fun match-up in a clash of styles. Kattar is a solid striker who likes to work off of his jab and can sit heavy on his punches. He does a good job transitioning between striking and wrestling, showing solid control and submission defense. Foster is a solid grappler who will look to keep this one in tight to not allow Kattar the space to get into a rhythm. This is a solid fight on paper despite Foster’s record looking worse than it actually is.

Michael “The Great White” Tobin is one of the top featherweight prospects from the growing MMA hotbed in Australia. The 23-year-old Gold Coast native earned nine wins in a two-year stretch to start his career undefeated. During Tobin’s run following his MMA debut in 2012, the submission ace locked up seven first-round submissions. His most recent submission victory came at the expense of Johnny Mendez Walker at Eternal MMA VII. Now, Tobin returns for Eternal MMA’s 16th show.

Tobin has four victories under the Eternal MMA banner, one of the best records from any fighter fighting for the Queensland-based promotion. He had two bouts with Rebel Fighting Championship in China that failed to materialize due to an opponent missing weight for a tournament and an injury.

Australian MMA veteran Craig Lankester replaces prospect Myles Simpson on short notice after Simpson fought at BRACE 38 last weekend. Lankester is a drastically lower-ranked opponent for Tobin. Lankester trains out of Fight Cross MMA in Brisbane. He has just one victory in 13 career bouts. Lankester has been finished in all of his losses, including nine by way of submission.

The submission game just so happens to be where Tobin thrives. Tobin is a prospect with some serious potential, whereas Lankester has failed to muster up a winning percentage above 10 percent. Lankester is an aggressive fighter who likes to throw his right leg kick and exchange with hooks on the inside. Tobin will beat him in any facet of the game and most likely show his superiority of technique and athleticism.

Mark De La Rosa has grown up competing on the U.S. regional grappling scene surrounding his home in Texas. The 21-year-old prospect won many NAGA titles on his way up the grappling circuit. “The Bumble Bee” has slimmed down and taken his training to a new level as he has progressed in his young career. De La Rosa has racked up an undefeated professional record under the training of Team Takedown, Genesis BJJ and Reyes Boxing. He’ll put that unblemished mark on the line at Superior Combative Championships’ “Fighting for Hope” card.

Arthur Oliveira is a 25-year-old Brazilian flyweight training with Ed Lutas Team and Impacto Jiu Jitsu. The Sao Paulo native has racked up an impressive 13 wins and 10 finishes during his five-year professional career. The former bantamweight has been successful since dropping weight divisions to start 2015 following one of the toughest tests in his career, a grueling three-round decision win over Adilson Junior at Circuito Talent de MMA 12. Junior put Oliveira in danger in the first round, taking his back and almost slapping on the rear-naked choke. Oliveira survived and displayed his sharp striking and non-stop aggression during the grappling exchanges to earn the victory.

Oliveira is unbeaten in his past 12 fights. His only recent blemish is a split draw against Brazilian prospect Gustavo Erak in 2013. The last loss on Oliveira’s record was nearly six years ago at the hands of top Brazilian prospect and XFCi season-two featherweight champion Guilherme Faria. Oliveira last entered the cage at Sugar Creek Showdown 28, where he submitted Nick Burgos with a rear-naked choke in the third round to win the SCS flyweight title.

This bout is a battle of two grapplers looking for that ever-important top position. De La Rosa is willing to be more risk averse and aggressive, which very well could be what wins him the fight. Oliveira has a strong base and good takedowns against the cage, but De La Rosa rarely lands on the bottom unless he chooses to. De La Rosa has come a long way from his days grappling in basketball shorts inside a high school gymnasium. His high-level training gets him another stoppage victory.