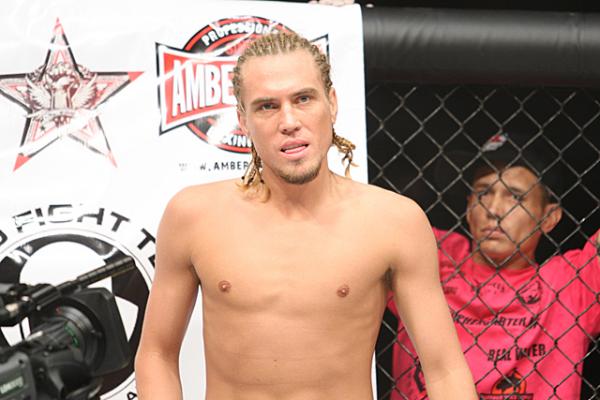 Many fighters decide to compete full-time because they have a passion for it and can’t see themselves doing anything else. That wasn’t exactly the case for Andrew Yates.

“I didn’t have good enough grades for college, so I started fighting,” Yates told Combat Press.

Yates faces Anthony Gutierrez on the next Titan Fighting Championship card, which takes place on Dec. 18. He considers it a “honor” to compete on this card and against a fighter like Gutierrez, who he views as a “tough fighter.” Despite the respect Yates shows for his opponent, he also thinks Titan might be babying Gutierrez.

“He had his chance on The Ultimate Fighter and he blew it,” Yates said.

Gutierrez was part of season 18 of The Ultimate Fighter, but he was eliminated from the show after not being able to make weight. He sports a record of 7-2 and is coming off a first-round submission victory over Cory Ortiz in his most recent fight. He suffered a split-decision loss to Brett Johns in a bantamweight title contest under the Titan FC banner in July.

“He’s trying to make a comeback on a show like Titan to make it back to UFC,” Yates said. “I’m a nightmare match-up for him. I’m going to submit him in the third round and make him quit like he has before.”

A spot on a fight card like Titan FC 36 represents a big step up for the 9-1 Yates, whose lone loss came in an appearance for the World Series of Fighting. Yates made his mark on the regional mixed martial arts circuit in organizations like Cage Wars after compiling an 11-12-2 record as an amateur.

Yates often didn’t know who he was fighting until the day of the fight.

“The guy might be a black belt,” he said. “On the regional scene, they’ll take any fighter on a card, even if he has a losing record. Sometimes it’s a pain in the butt to get a fight, because some guys want more money to fight. They want $2,000 more, but the promoter doesn’t have $2,000.”

Yates trained out of his garage while competing at the amateur level, but now credits his more serious training for his improvements as a fighter.

“Over time, anything gets better,” Yates said. “If you train all the time, you have to get better.”

Yates hopes to make a sustainable career out of MMA.

“I want to be able to support a family like my Dad supported us,” Yates said. “I hope I can be half the man he is.”

Will committing himself fully to MMA and emerging from training in the garage be enough for Yates to be triumphant over someone who has already had a small taste of the big stage? Only time will well.