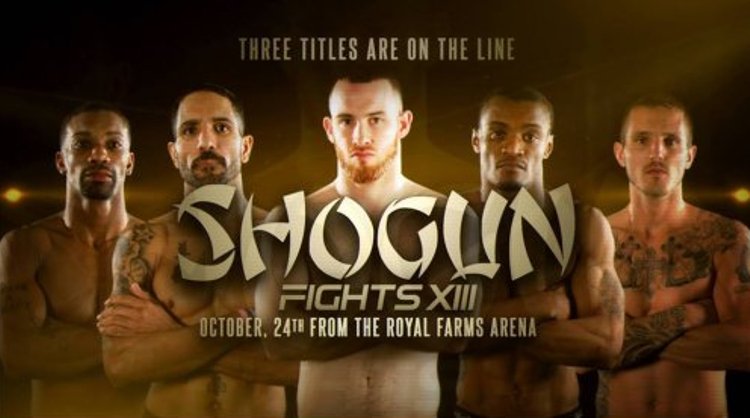 On the heels of probably the best card in its existence, Shogun Fights returns this Saturday, Oct. 24, from Royal Farms Arena in Baltimore. The 13th installment of Shogun Fights promises to be another terrific event, with three title fights scheduled for the first time in the promotion’s history.

This preview will look at each of the title fights a little more in depth and predict who takes home each piece of gold, followed by picks of the remaining nine fights on the card.

Jones is a mixed martial arts mainstay, having made his amateur debut in 2001. He is also a local MMA legend and Baltimore institution, having competed at the first Shogun Fights in 2009 and on eight total events for the promotion. He’s currently on a four-fight winning streak, with all four wins coming via finish. Jones’s game is well rounded, as he boasts wins by both submissions and knockouts. He generally tries for the knockout, but has developed a nice submission game as well.

However, Isata is no pushover. He is also on a four-fight winning streak and has won his last two bouts at Shogun Fights. He will look to push Jones and make him go the full length of the fight. The role of spoiler is nothing new to Isata, who emerged victorious in his last fight against another hometown hero. But there always seem to be a different atmosphere in Royal Farms Arena when Jones makes his way to the cage.

Whether it’s the hometown crowd behind him, the large entourage of students from his martial arts classes that accompany him to the cage or some other unexplained phenomena, I think Jones has one last run at the top in him.

Terrill competed in what was probably the greatest fight in Shogun Fights history at the organization’s previous card in April. He suffered a submission loss to Cole Presley in a fight for the welterweight title. However, Terrill was in control for most of the bout and even managed to break Presley’s nose with the very first punch he threw.

While it wasn’t enough to put Presley away, Terrill gets another shot at the title after Presley decided to drop to lightweight. In Carper, Terrill will face a fighter known for his Muay Thai and kickboxing. I expect another stand-up battle for these two that should bring the crowd to its feet yet again.

Both fighters have a lot of mileage on them in their careers and are known to leave it all in the cage. This fight is my pick to be the best one of the card. Terrill is as game as they come, but I like the 36-year-old Carper to finally add some gold to his mantelpiece.

Root is a late replacement for the aforementioned Presley, who had to withdraw from this fight because of injury. Although he is late to the title picture, Root is also a veteran of nine bouts at Shogun Fights, with eight victories.

Root is a submission specialist, which can be attributed to his background as a wrestler. He is among the more popular fighters who compete at Shogun Fights and his early finishes always excite the crowd. However, Watley has competed multiple times at Shogun Fights and has a submission win on his resume. Watley is certainly not lacking in confidence for this fight, and he prides himself on being a student of the game.

Watley’s athleticism and well-rounded game will keep him in the fight early. But eventually, the veteran savvy and ground game of Root will take over. I like Root to add yet another submission victory to his already impressive resume.