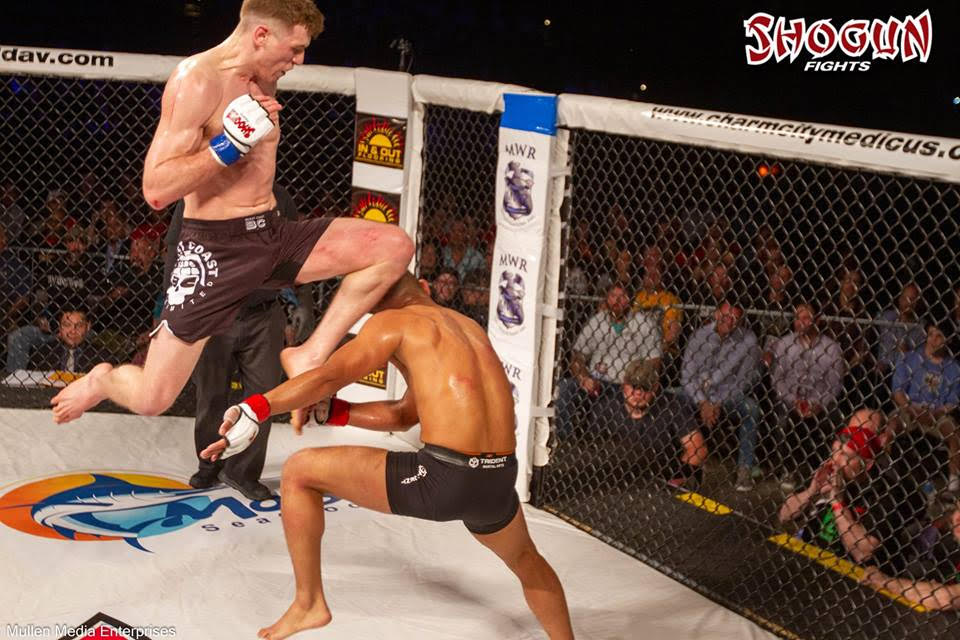 It’s fitting that the premiere of the final season of Game of Thrones airs this weekend, because it was just last weekend that I experienced an arena turn into the land of Westeros, but with nary a dragon or White Walker in sight.

That’s one of the things I enjoy most about attending the biannual Shogun Fights cards at Royal Farms Arena in Baltimore. It’s a very tribal environment, where just about every fighter who competes on the card has his own devoted group of fans scattered in different sections throughout the arena. It could be compared to the houses of Lannister, Stark and Greyjoy.

However, the uniqueness of Shogun Fights doesn’t start with the crowd or its unique similarity to a fictional television show about dragons, ice zombies, and creepy references to incest. It starts when driving up Interstate 95 as the skyline of Baltimore comes into view. As far as cityscapes go, it’s not as iconic as New York City or Chicago. Yet, to invoke a horrible cliché, there is a certain “charm” in seeing the Baltimore skyline transition from old brick buildings and homes that hark back to the city’s blue-collar, industrial heyday to tall buildings, almost skyscrapers, that bear names like Pandora, Transamerica and Legg Mason.

Upon arriving in Baltimore, the true spirit of the city came out when I witnessed a group of 20-somethings shotgunning cans of beer in the parking garage. There was also a baseball game between the New York Yankees and Baltimore Orioles going on during Shogun Fights, so whether this group of young people were no doubt reliving their college glory days in celebration of baseball or mixed martial arts was unknown.

The alcohol was also flowing freely at the backstage VIP area for Shogun Fights 21. Fans enjoyed free food and booze to the sound of Top-40 tunes blasting over the venue’s sound system. A who’s-who of Shogun Fights competitors and alumni were wandering about, including Binky Jones, Rob Sullivan, Rob Watley and the promotion’s welterweight champion, Micah Terrill. UFC featherweight Brian Ortega was also backstage as a special guest, and he was besieged by fans all night for autographs and pictures with him and his thick, luxurious, twice-braided hair.

Whenever I talk to fans and fighters about Shogun Fights, one of the first things they say is that the event is as close as it gets to being in attendance for a UFC card. The similarities are easy to spot. However, I like to think Shogun Fights borrows a little more from the Pride cards of yesteryear, with a stage and a large video screen for fighters to come out to, as well as the use of steam generators. As much as many MMA fans are loathe to liken their beloved sport to pro wrestling, these comparisons exist for a reason. The video introduction for Shogun Fights is infinitely better than the cringeworthy and dated “Face the Pain” video that the UFC continues to use.

Among the more unique characteristics of Shogun Fights is that it takes place in an arena that can seat up to 14,000 people, and the event routinely draws a few thousand fans on its own. However, it is still an intimate enough venue for MMA that the ears can hear such pleasant expressions by fans as:

“Kick his ass, Seabass!” (Yes, this was actually said by someone.)

“Bullshit!” (This was screamed multiple times by the same very enthusiastic young woman during one particular fight.)

Despite how all of this may sound, the fans in attendance were not without their better qualities. Whereas the jeers are often quick to come out once an MMA fight goes to the ground, especially in the UFC, Shogun Fights fans recognize the difficulty of the ground game and make it a note to cheer and applaud fighters who display excellent grappling. This was especially evident during the Shogun Fights bantamweight title fight between Greg Fischer and Carlos Vera, which was contested almost exclusively on the canvas.

It’s the shared enthusiasm and passion for MMA between the fans who attend these twice-a-year fight cards and the fighters who compete on them that best sums up Shogun Fights and makes it unique in the regional MMA landscape. It’s almost as if they recognize they have something special. While they’re welcoming to newcomers, they would still rather just share it among themselves.

It’s in local heroes, past and present, who compete in Shogun Fights, like the aforementioned Jones, Terrill, Sullivan and Fischer, as well as Ryan McGowan. These are local boys done good who love competing in front of their hometown, and their hometown loves watching them.

So, as the night descended on Baltimore and I left its skyline in my rearview mirror as I head out of town, the agonizing wait for the next Shogun Fights card begins.