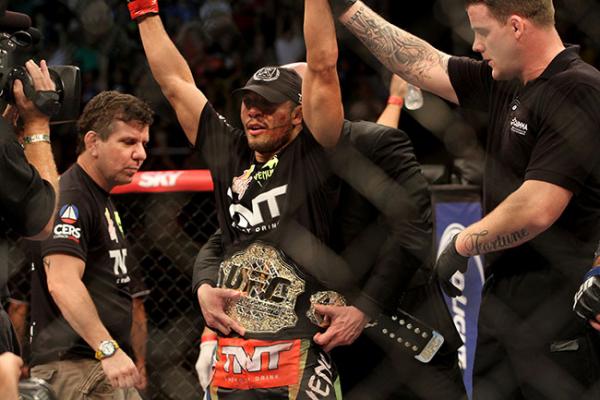 If you look around the web for mixed martial arts top-10 pound-for-pound rankings, you will not find one that doesn’t have UFC featherweight champion José Aldo in there. Heck, you’d be hard pressed to find one that doesn’t have him ranked as one of the top three best fighters on the planet. Yet, even after all he has accomplished over his legendary career, he is being subjected to much criticism and, to a certain extent, disrespected by media, fans and some of the UFC brass. In some cases, this public bashing of the champion is happening on live, national television for the entire world to see. That is no way to treat a man who has laid it out on the line against the best the world has to offer and has been doing it well over 10 years.

The reason for all this, of course, is a direct result of all the fallout of Aldo’s decision to pull out of what is arguably the biggest fight in UFC history in which he was to face Conor McGregor in Las Vegas on July 11. It was a fight that many fans — and even the finicky casual fans — were really keeping an eye on.

The promotion claimed that it has never spent this amount of money on promoting a fight before, and that was very evident when you take a look at some of the content the UFC team was pumping out in the buildup to this fight. According to the UFC, the fight was on track to eclipse a million pay-per-view buys, a number the UFC rarely achieves nowadays in this new MMA landscape. It was undoubtedly a major blow for the UFC to lose the fight, but did it warrant some of the response that came from of UFC President Dana White?

Another aspect I suspect may be playing a role in this whole debacle is the fact the Aldo pulled out with just over two weeks to go until fight day. If the injury happened a few months ago and there was time to come to terms with the fact that Chad Mendes is now fighting the Irish phenom, maybe we all would have forgotten about Aldo’s injury and turned our attention toward the fight at hand, which is still going to be one hell of a battle. Instead, because of the way it happened and the timing of it all, here we are on fight week and Aldo’s name is coming up just as much the guys who are actually stepping in the cage on Saturday night.

Some might argue that Aldo has earned this reaction because of his track record of pulling out of fights. Those who express this opinion are either fair-weather fans or they simply don’t like the featherweight champion.

All it takes is a few minutes of research to realize that Aldo is actually a very active champion. It could be easy for anyone to think that he has pulled out of fights and doesn’t defend his title in reasonable time. However, when Aldo is compared to all the other champions, at least Aldo’s fights always get postponed to a few months later and never fully canceled. He has always made those reschedule dates and fought the guy he was originally set to face.

Out of Aldo’s nine WEC and UFC combined title defenses, only once did he go an entire year without defending the belt, and it that was by less than a month. Fellow UFC champs Anthony Pettis, Cain Velasquez, Dominick Cruz and even Georges St-Pierre went much longer without defending their respective belts. Other than flyweight kingpin Demetrious Johnson, there hasn’t been a more active champion in the UFC. So to say that Aldo should be stripped of the title because he is always pulling out of fights is an absurd statement and shouldn’t even be a topic of discussion.

Just like many of you, I was really bummed when I heard the news of Aldo’s withdrawal from his scheduled meeting with McGregor. I wanted to see that fight more than anything else, and my stomach turned a little when it became official. What I didn’t do was go on a bashing tour of the greatest featherweight champion the sport has ever seen. If we really take a look at Aldo’s history, it is clear that this man has earned his spot at the top of the sport. We shouldn’t let a situation like his unfortunate rib injury and subsequent withdrawal from UFC 189 deter us from all he has already accomplished.

Oh, and did I mention that he seems to have a life of fighting ahead of him?