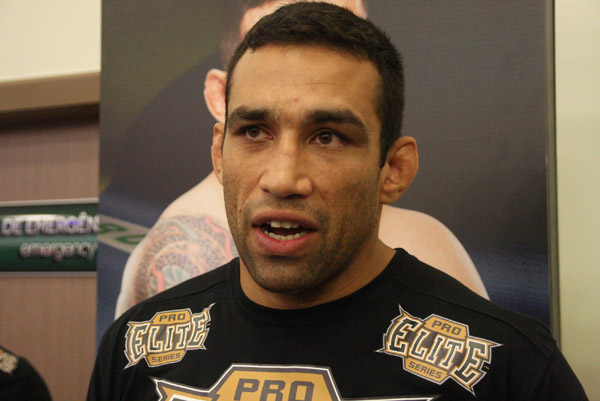 On Saturday, June 13, the UFC hosted UFC 188: Velasquez vs. Werdum from the Arena Ciudad de Mexico in Mexico City.

In the night’s main event, the promotion unified its heavyweight title as reigning champion Cain Velasquez returned from a lengthy injury absence to square off with interim titleholder Fabricio Werdum. The pair were originally slated to meet at UFC 180 in November, but Velasquez was forced out of the contest. Werdum went on to stop Mark Hunt and capture the interim championship. The 32-year-old Velasquez fought for the first time since October of 2013. Brazil’s Werdum had not tasted defeat since returning to the promotion in 2012.

The co-main event of the evening featured a long-awaited lightweight battle between former Strikeforce champion Gilbert Melendez and former Bellator MMA kingpin Eddie Alvarez. Melendez had come up short twice in his conquest for UFC gold, most recently falling to Anthony Pettis in December via guillotine choke. Alvarez, meanwhile, dropped his promotional debut in September to current No. 1 contender Donald Cerrone.

Brazilian Fabricio Werdum stunned Cain Velasquez with third-round guillotine choke to capture the unified heavyweight championship. Velasquez pushed the pace in the opening frame as both fighters traded heavy shots. A large cut was opened over the left eye of Velasquez, but his output likely helped him claim the round. In the second frame, Werdum landed at will on the feet. He frequently snapped the head of Velasquez back with punches and knees. Velasquez went to his wrestling in the third round, but it proved to be his downfall. He powered into a double-leg takedown and straight into the guard of Werdum. Werdum locked on a guillotine choke and coerced a tap.

The long-awaited lightweight clash between former Bellator MMA champion Eddie Alvarez and former Strikeforce champion Gilbert Melendez didn’t play out as many expected, but Alvarez did enough to claim the split decision win. Melendez delivered a huge right forearm to the left eye of Alvarez in the opening round that wobbled Alvarez. Alvarez recovered, but blew his nose between rounds, causing his left eye to swell shut. Despite the eye issue, Alvarez went to his wrestling and scored with takedowns. Melendez landed with his jab, but it wasn’t enough, as two of the three judges rewarded Alvarez for his efforts.

In his return to the middleweight division, TUF winner Kelvin Gastelum battered former Strikeforce champion Nate Marquardt. Gastelum used his jab effectively in the first frame, forcing Marquardt to back up against the cage. A flurry along the fence appeared to hurt Marquardt late in the round, but he survived. Round two was all Gastelum as he poured it on with strikes. Marquardt turtled up against the fence, but the referee didn’t intervene. When the round closed, Marquardt’s corner stopped the bout to hand Gastelum the TKO win.

TUF Latin American winner Yair Rodriguez used a barrage of flashy kicks and a slick guard game to get the better of Charles Rosa. Rodriguez threw a wheel kick and jumping head kick in the opening minute before locking in a deep triangle choke. Rosa survived the submission attempt and briefly took Rodriguez’s back as the round closed. A spinning elbow from Rodriguez opened a large cut on the head of Rosa and he continued to land with kicks. Rosa went for broke in round three, scoring with takedowns and delivering ground and pound. It wasn’t enough, however, as Rodriguez claimed the split decision win.

Strawweight Tecia Torres remained unbeaten and handed fellow TUF 20 castmate Angela Hill her first loss with a grinding decision win. Torres quickly exploited the takedown defense of Hill in the first stanza, spending most the round in half guard. It was more of the same in round two, as Torres again put Hill on the canvas and worked from side control. Hill came out the aggressor in round three, but Torres put her against the cage and rode it out until the final bell.

Flyweight Henry Cejudo edged out a very game Chico Camus, taking home a unanimous decision victory. Cejudo was the busier striker from the start of the fight, but his takedown attempts were nullified by Camus throughout the contest. Camus fired back with punches, keeping the fight close. A late takedown from Cejudo sealed the win for the former Olympic gold medalist.

Former TUF winner Efrain Escudero picked up a first-round submission win in his native country, forcing fellow lightweight Drew Dober to tap to a guillotine choke. Dober threw a big kick, but slipped to the mat. Escudero capitalized, wrapping up Dober’s neck and pushing him again the cage. Dober worked hard to escaped, but eventually was forced to tap.

Bantamweight Patrick Williams scored a lightning-fast submission win over TUF Latin America winner Alejandro Perez. Williams delivered a series of right hands that rocked Perez immediately. He latched onto the neck of Perez and pinned him against the cage. The deep guillotine put Perez to sleep and handed Williams his first UFC win.

Lightweight Johnny Case remained unbeaten in the Octagon, besting Frank Trevino on the scorecards. Case dominated early, but absorbed a nasty eye poke from Trevino that forced him to scream in pain. Case was able to continued, but changed to a takedown-oriented attack. Trevino could not stay upright and spent the majority of the second and third rounds on his back. It was a clean sweep for Case on the scorecards.

Ireland’s Cathal Pendred continued his winning ways, grinding out Augusto Montano for a unanimous decision win. The first round was largely a feeling-out process and prompted referee Herb Dean to warn Montano for inactivity. He responded by dropping Pendred in round two, but could not stop Pendred’s grinding attack along the fence. The final round was sluggish, but Pendred was the more aggressive fighter throughout, earning the nod from the judges.

Mexico’s Gabriel Benitez started the night off well for the home crowd, outworking Clay Collard for a unanimous decision win. Benitez did damage from the opening bell with body shots, slowing the advance of Collard. Collard answered early with takedowns and even took the back of his fellow featherweight. However, Benitez continued to deliver kicks and punches to the ribs of Collard, securing the win on the scorecards.