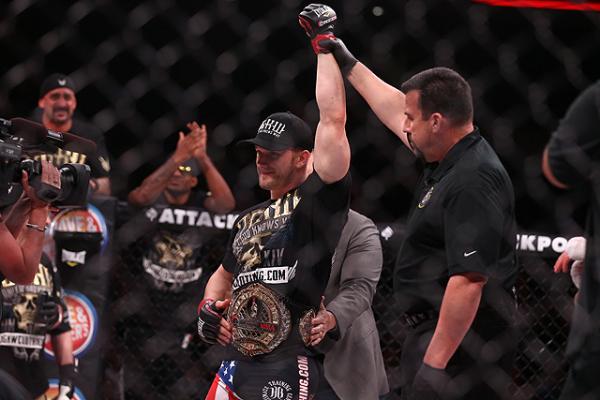 On Friday, May 15, Bellator MMA hosted its 137th event from the Pechanga Resort and Casino in Temecula, Calif.

The event was expected to be headlined by a middleweight title fight between recently crowned champion Brandon Halsey and longtime veteran Kendall Grove. However, Halsey failed to make weight for the title affair and was stripped of his title. Additionally, he was fined 20 percent of his fight purse. Halsey captured gold in September with a lightning-fast, first-round submission of Russian Alexander Shlemenko, and the 28-year-old had yet to taste defeat in his eight-fight career. The title remained on the line for Grove, who had gone 2-1 inside the Bellator cage. The former The Ultimate Fighter winner was most recently in action against former light heavyweight champion Christian M’Pumbu, earning a second-round submission. A win for Halsey meant the middleweight title would become vacant.

The card also featured former Bellator bantamweight titleholder Eduardo Dantas against Mike Richman. Richman missed the bantamweight limit by more than three pounds at Thursday’s weigh-ins and the bout was originally reported as being scrapped. Bellator officials later announced that the fight would still take place.

The event kicked off Friday with a preliminary card stream on Spike.com at 7 p.m. ET. The four-fight main card followed at 9 p.m ET on Spike.

Brandon Halsey seemed well on his way to getting yet another quick, first-round stoppage, but Kendall Grove survived the early onslaught. Halsey dominated Grove from the beginning to the end with his heavy top control, for which Grove had no answer. Halsey relentlessly went for the takedown and was consistent in his success. Halsey seemed to slow down in the second round, but he was able to get a second wind and continue to control Grove and unleash some devastating shots on the ground. Grove’s lone bright spot came with under 20 seconds left in the first round when he landed an upkick that wobbled Halsey. This was Halsey’s longest fight in his career and he walked away victorious with the TKO victory in the fourth round.

Eduardo Dantas successfully returned to the cage for the first time after dropping his bantamweight championship. He opened immediately with a takedown on Mike Richman. Dantas spent much of the first round controlling Richman, preventing him from using his powerful striking. Richman found his range in the second round and landed more and more on a fading Dantas. Dantas continued to try to land the takedown, but Richman was able to stuff the shots and counter with a guillotine choke. Dantas was able to successfully land a takedown in the third frame and spent a good portion of the round controlling Richman on the ground. Eventually, Richman was able to get back to his feet and assert some control in the stand-up as Dantas bled from a cut over his left eye. The bantamweights went the distance, and Dantas edged Richman with 29-28 scores across the board.

Curtis Millender spent much of his fight with Fernando Gonzalez controlling the distance as the bigger fighter, but it wasn’t enough. Gonzalez consistently tried to break into Millender’s range and took some hard shots going in. Gonzalez ended the first round with a takedown in the final seconds, but couldn’t follow up in the second round, as Millender once again controlled the striking and landed a takedown. The third round was completely up in the air. Gonzalez showed a tough chin and an even stronger mental state. He was able to catch Millender on a slip and immediately jumped in for a guillotine choke as he pulled guard. Gonzalez lost the choke initially, but worked hard to get his arm back around the neck of Millender and to grip his wrist. After a few seconds, Millender tapped out. It marked the fourth victory for Gonzalez inside the Bellator cage.

Darrion Caldwell and Rafael Silva fought to their strengths and ended up going the distance. Caldwell looked effective in his striking early in the first frame, but mixed in his high-caliber wrestling to control Silva. Caldwell worked in outside trips, throws and the occasional traditional double-leg takedown to help bring the fight to his comfort zone. Silva countered Caldwell’s top control with two heel-hook attempts in the first round and a tough guillotine choke in the second round, but Caldwell was able to slip out of the submissions. Referee Mike Beltran stood the fighters up midway through the third round after Caldwell failed to progress on the ground. In the end, Caldwell’s effective takedowns and control earned him the nod from the judges. Caldwell remains undefeated.