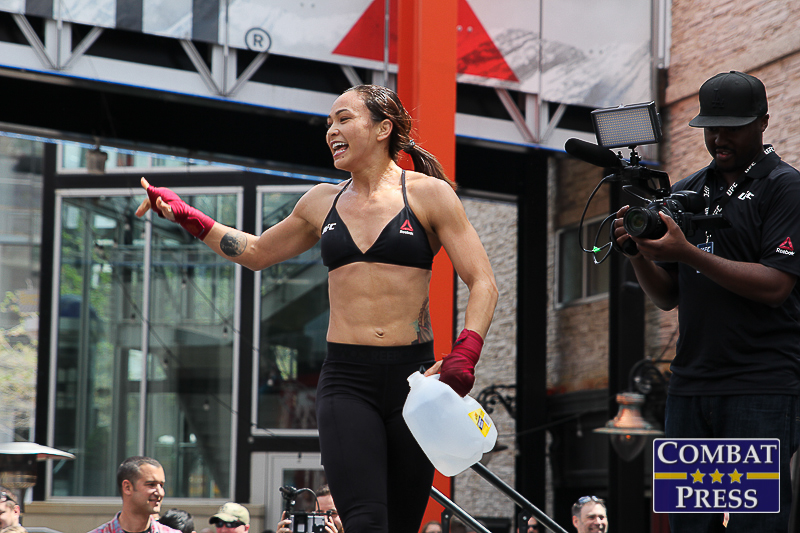 On a weekend where all the major MMA promotions worldwide are putting on a show, it is no surprise that there will be plenty of women clubbing one another for prizes.

The UFC, the Rizin Fighting Federation, the Professional Fighters League, and ONE Championship will all have at least two women’s bouts. Only Bellator MMA isn’t in on the fun. With so many to remember and with these bouts scrambled in the mix as main and co-main events, main-card fights, and deep prelim bouts, this article will serve as both a TV guide and a Netflix recommendation of sorts.

The UFC Tampa headliner is without a doubt the biggest and most significant fight this weekend. Former strawweight champion Joanna Jędrzejczyk battles fan-favorite Michelle Waterson in a five-round affair.

Three women have claimed the strawweight crown since Jędrzejczyk lost it two years ago. The one constant seems that women not named Joanna cannot hold the belt for too long. The Polish fighter is intent on reclaiming her throne, but Waterson is set on becoming the first mother to hold a UFC championship. A victory over the former champion is a prime route for Waterson to challenge for the title.

The fight seems like an uphill battle for Waterson. The longtime Jackson-Wink staple has improved, but Jędrzejczyk’s striking has always been top notch and still gives the Pole the advantage. However, weight issues have Jędrzejczyk in a seemingly compromised situation.

This contest is capable of much excitement, but the latest issues for Jędrzejczyk with the scale should give Waterson an edge. She should at the very least be competitive and possibly even beat the former strawweight queen. It will be a close fight with lots of dynamic striking. The high stakes make this fight a can’t-miss affair.

In what will serve as a sort of co-main event for PFL’s seventh show of the year, Olympic gold medalist judoka Kayla Harrison takes on Canadian striker Bobbi-Jo Dalziel in a semifinal match to determine one of the PFL’s women’s lightweight tournament finalists.

In a last-minute change to the PFL card, Genah Fabian withdrew from her originally scheduled fight against Harrison due to weight-cutting issues. This opened the door for Dalziel, who initially finished outside the playoff cut at No. 5 in the field.

Dalziel defeated Fabian during the PFL regular season, but then lost to Larissa Pacheco in her next bout. The Canadian put on a stellar fight against Fabian, though. It was tightly contested, entertaining, and showed both women’s grit. Fabian is a long, lanky striker, but so is Dalziel. This can only aid Harrison and be to the deficit of the late-replacement opponent.

Many of the challenges Fabian posed to Harrison are present in Dalziel. However, Dalziel has not adequately prepared for an athlete at the Olympian’s caliber. In the clinch lies intrigue, much like on the feet, but the late notice gives Harrison an inherent advantage that cannot be ignored.

One of the most intriguing fights of this weekend has now been demoted to a possible skip. On paper, the fight is great, but this bout will not be as competitive as the original affair. Follow your instincts on this one.

Brazilian Jiu-Jitsu phenom Mackenzie Dern returns to the cage over a year after her maternal leave to face Amanda Ribas in a UFC Tampa main-card affair.

Dern has been a hot commodity since she made her professional MMA debut three years ago. Ribas made a name for herself with a second-round submission in her UFC debut against up-and-comer Emily Whitmire.

Most did not expect Dern to return to action in 2019. She gave birth to her child in June, after all. Compounded with the fact that in her last outing she severely missed weight against Amanda Bobby Cooper, there were questions about her desire and passion for the sport. It seems like Dern has taken a page from Donald “Cowboy” Cerrone’s playbook, because parenthood has made her extremely motivated.

Walking around only a few pounds overweight this week, Dern has made a complete 180 from the hard-headed, lukewarm athlete she was last year. In 2018, fans and media were screaming for her to move to flyweight. Instead, she’s returning to strawweight and looks to be surpassing expectations.

Conventional wisdom says this should be an easy victory for the American, but Ribas seems like a confident young fighter who can give Dern a challenge. This is a must-watch for intrigue and Dern’s performance evaluation.

Former Strikeforce bantamweight champion Sarah Kaufman battles UFC veteran Larissa Pacheco on the other side of the PFL women’s 155-pound tournament. Kaufman has been nothing short of impressive since her departure from the UFC. She’s acquired a 4-0 record since leaving the promotion. Pacheco has had ups and downs, but she logged a submission win over Bobbi-Jo Dalziel.

This bout isn’t as intriguing as its counterpart that features Harrison and Dalziel, but it is significant. It will determine the other finalist of the tournament. This commands your attention, but maybe not in the immediate sense.

Flyweights Lauren Mueller and J.J. Aldrich will open proceedings for the UFC Tampa event on Saturday. Mueller is on a two-fight skid right now, and Aldrich is coming off a loss against prospect Maycee Barber.

There are no real problems with this fight. Both women are well rounded, and it could be more than entertaining on the feet. Aldrich is very technical and can sometimes be a little too patient with opponents. For that small factor and the fact that it’s not the most impactful fight for the division, it lands in the catch-on-your-own-time category.

Seo Hee Ham meets Miyuu Yamamoto in a 108-pound affair on Saturday’s Rizin card. “Hamderlei” is a woman that the UFC would not have ever cut if it had implemented an atomweight division. She has oodles of personality, knockout power in a division where it seldom exists, and a penchant for fun, violent fights.

Yamamoto is 45 years old, but she is also a highly accomplished amateur wrestler with solid roots in both MMA and wrestling. The 13-year age discrepancy cannot be ignored, but it also does not tell the entire story. Yamamoto is one of the most skilled wrestlers Ham has faced in quite awhile.

This bout is sure to be tense, with a high probability of excitement. The biggest issue for U.S. fans is the time slot. If you’re old-school and can pull the vintage Pride-like all-nighter, do not miss this one. If that’s a bridge you’re not willing to cross, this fight alone should persuade you to avoid Twitter Sunday morning and get the Fite TV pay-per-view right here on Combat Press to watch during breakfast.

Rena Kubota is a Shootboxing veteran who hasn’t done a lot in her short stint in MMA. Kubota’s original opponent, Shawna Ram, pulled out just over a week ago with a concussion. This leaves Kubota with the 0-3 Alexandra Alvare Carlos as her new opponent.

In plain English, this is a squash match. If you’re into finishes on their face alone, then this is a fight to watch. If you like competitive bouts, then feel free to get a full night’s sleep and ignore this match.

ONE Championship strawweight champion Angela Lee rematches Jingnan Xiong, the woman that beat her into submission earlier this year.

Lee was attempting to nab Xiong’s flyweight title in March. This time the shoe is on the other foot, as it is Xiong who is going down in weight to try to steal the belt from the strawweight champ.

Lee has looked anything but “Unstoppable” as of late. She’s 0-2 this year, and those defeats were emphatic. Michelle Nicolini put on a Brazilian Jiu-Jitsu clinic on the grappling-centric Lee following her TKO loss to Xiong.

The saving grace is that both losses came at flyweight, a weight class above Lee’s normal division. The strawweight belt still lies on the shoulder of Lee, and this is a weight class where she has yet to taste defeat. A second loss to Xiong would not just be devastating to Lee’s confidence, but will also give her three consecutive defeats. Lee will have lost her prized possession to a woman who will always be an inherently bad match-up for her in any weight class.

The stakes are high, the entertainment value too, and the promise of excitement is red hot. This fight is definitely worth seeking out at all costs.

Mei Yamaguchi fights Jenny Huang in the sole female fight on the second show of the Century event. This is a rematch from 2017, when Huang lost to Yamaguchi via a second-round rear-naked choke.

The first fight was a steep step in competition for the young Taiwanese fighter. The rematch just seems like a cruel joke. Huang is on a four-fight skid that includes the loss to Yamaguchi.

Huang has inherent problems in her stand-up that have not improved, and her grappling is not up to snuff yet either. Yamaguchi had and will continue to have the edge in experience, but there’s also no sign of a decline in her skills.

Much like Kubota’s scrap with Carlos, this contest lands in the squash-match column. Stay up late or wake up early if your desire for meaningless finishes cannot be satiated.