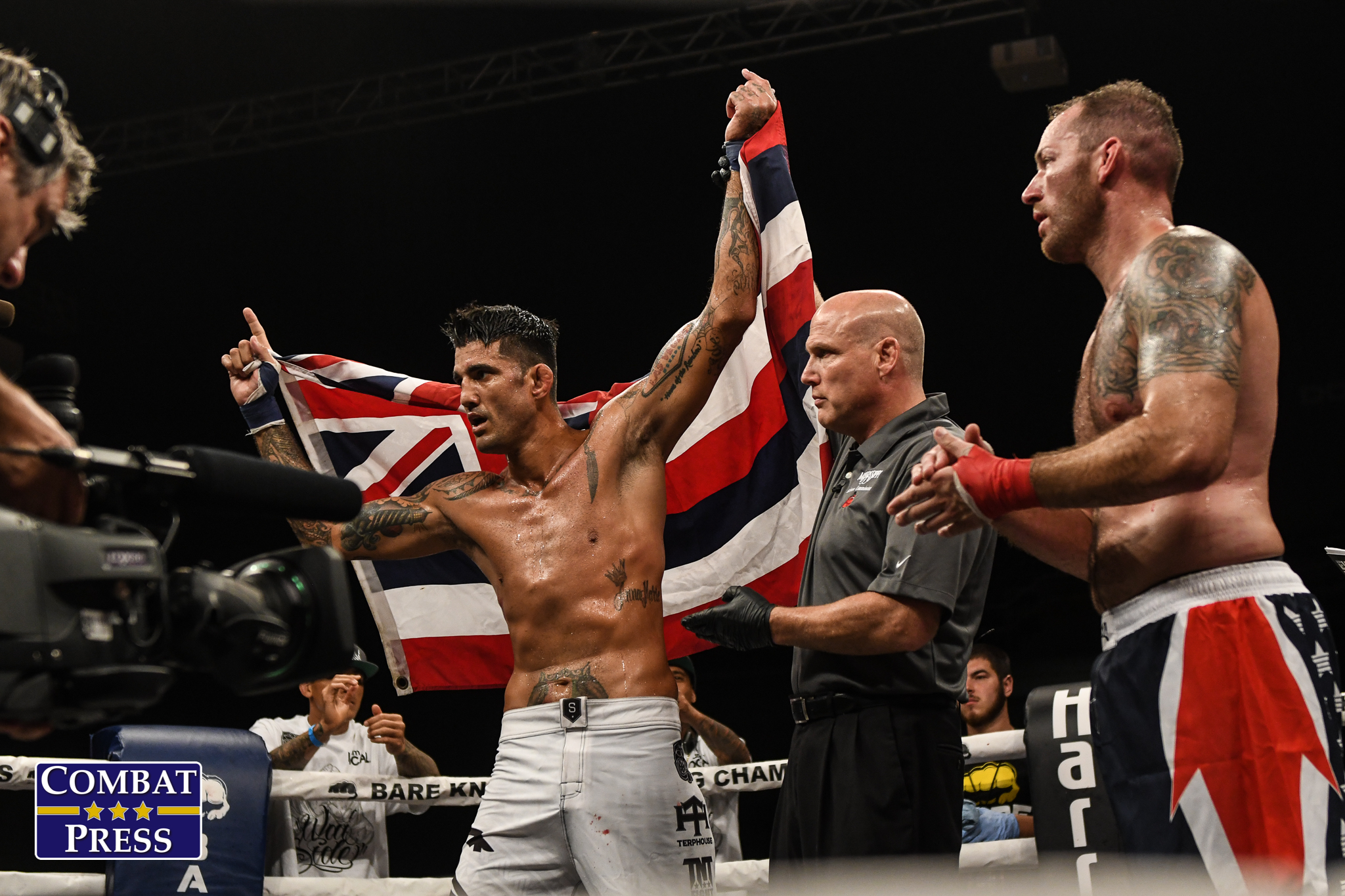 Well, it’s obviously a slow week for the regional circuit. Rei da Selva Combat’s 14th show makes our cut despite featuring a title hopeful with only two pro bouts under his belt. That man is Diego Passos, who goes up against 18-fight veteran Marcos Rodrigues for the promotion’s vacant lightweight crown.

Passos actually scored both of his victories in a single-night tournament at Rei da Selva Combat 12. The 26-year-old needed just 29 seconds to submit Augusto César da Silva. His other victory was the result of an intentional eye poke from João Batista. The OCS Jiu-Jitsu & MMA export was scheduled for an additional bout in early 2019, but the fight was scrapped.

The 32-year-old Rodrigues definitely carries the experience edge. “Marajó” debuted in 2012 and reeled off four wins out of the gates. He took a step up in competition in 2014 that led to back-to-back defeats. The Champions Factory/White House representative righted the ship for another five victories against low-level opponents before again trying his hand against a more experienced adversary. Again, the results were disappointing, with the Brazilian dropping two fights in a row once more. He’s rebounded for a five-fight winning streak, but the competition continues to leave a lot to be desired. Rodrigues is a difficult out, but he’s a solid finisher as well. He has a balanced resume of six finishes each by way of knockout and submission.

This contest is a test of whether Passos is a legitimate prospect or not. There’s very little to go on, given that one of his victories came via disqualification of his opponent. However, a lightning-fast finish of da Silva provides some hope. The only problem is that Rodrigues has never been stopped, which more than likely means Passos will have to go the distance here if he is to win.

While Rodrigues has lost to many of his strongest foes — we’re talking guys with records like 9-2, 3-0-1, 8-4 and 3-1 — he has also squeaked by Helderson Martins (11-4) and Leandro Silva (2-0). His wealth of experience will help him out once again here as he takes on a very green opponent. Passos could turn out to be a world-beater, we just don’t know. However, based on what we do have to go on, Rodrigues seems more likely to take advantage of his opponent’s mistakes and score a submission finish.

This is the marquee bout on the regional circuit this weekend. The promotion delivers one of its bigger names as one half of the headliner for its 81st show. Nkazimulo Zulu, the former flyweight champ, returns to action for the first time since he lost the title to Jake Hadley in April. Zulu moves up to the bantamweight division for a shot at interim gold, and it comes against Faeez Jacobs, whose 6-2 record hides the fact that he’s an extremely exciting fighter and a true threat to another Zulu title run.

Zulu started training in Kyokushin karate at the age of six and was the 2008 tri-nation champion. Soon after, he left karate behind for the world of Muay Thai and K-1 kickboxing. He rose to a high level in K-1 before moving on to MMA in 2010. “Zulu Boy” made his professional MMA debut in 2013 and went 1-1 through his first two outings, including a loss in his EFC Africa debut. The 5-foot-5 fighter rebounded from the loss to pick up three wins and a split draw over his next four fights, including three EFC Africa bouts. It was enough to earn him a spot in a fight for the vacant EFC Africa 135-pound crown, which he won in February 2014 with a first-round TKO finish of Charlie Weyer. Zulu dropped the belt in his very next bout against Demarte Pena. This prompted a move to the flyweight division, where Zulu decisioned Francois Groenewald before snagging the EFC Worldwide flyweight crown with a first-round finish of Craig Ninow. He made a failed attempt to land a UFC title shot via The Ultimate Fighter 24, where he was submitted by Hiromasa Ogikubo. Zulu returned to EFC Worldwide for three more successful title defenses before he dropped a decision and relinquished the belt to Hadley. This will be his first fight back at 135 pounds since the loss to Pena.

Jacobs plowed through two amateur opponents before making the move to the professional level in 2017. His pro career also got off to a successful start. He debuted at EFC Worldwide 58 with a first-round stoppage of fellow rookie Jesse Fleming. He added another first-round knockout in his sophomore effort, but he went just 1-2 over his next three fights. The “Troublemaker” righted the ship in his EFC Worldwide 72 outing against Tumisang Madiba and has added two more victories to his resume after submitting Madiba. Jacobs is an all-or-nothing fighter who has never seen the scorecards and only made it beyond the first round in two of his pro bouts.

The 29-year-old Zulu hasn’t exactly had it easy in recent years. He was hospitalized in 2017 after he was struck by a car while completing his morning run. The Tapout Academy product was once a star of the EFC’s bantamweight division, and he has another opportunity to sit on the throne now that Pena is out on a lengthy suspension for performance-enhancing drug use and Irshaad Sayed has been inactive.

Jacobs has been a strong finisher in his time as an EFC Worldwide mainstay, but his go-for-broke approach has also gotten him into some trouble. He was knocked out in the third round by Nerick Simoes and submitted in the first frame of his fight against Cal Ellenor. Still, Jacobs is a highlight reel waiting to happen — check out his flying front kick against Oumpie Sebeko — and his length could cause some trouble for Zulu.

Jacobs has done most of his damage against fellow up-and-comers, not the cream of the EFC crop. Zulu is one of the stars of the promotion, and his experience against the likes of Pena, Hadley and Ogikubo will serve him well. Jacobs is primarily a threat on the feet, but Zulu is a very skilled striker who has amassed six victories by way of knockout. While the former flyweight champ’s ground game is still progressing, he should have the upper hand there as well. The only question is whether he can deal with the reach of Jacobs. Zulu will likely bring a conservative approach to this fight and take a close decision from the judges in what should be a fun fight.

The World Fighting Championships rescheduled its 110th event to this weekend, and it takes our final preview slot here. The Hawaiian show relies on some homegrown talent to stir up interest. The most notable name is former UFC star Kendall Grove. The middleweight will compete at a catchweight of 195 pounds against grizzled Strikeforce and Bellator veteran Anthony Ruiz.

The 36-year-old Grove has had a somewhat unsuccessful campaign under the Bellator banner, where he went 4-5 with victories over Joe Vedepo, Christian M’Pumbu, Joey Beltran and Francisco France. Of course, he also lost to Brett Cooper, Brandon Halsey, Alexander Shlemenko, John Salter and AJ Matthews. Grove, who rose to popularity as a winner of season three of The Ultimate Fighter, washed out of the UFC in 2011 after a 7-6 stint with the organization. He bounced around the regional and international scenes for a couple of years before landing in Bellator in 2013. Grove has been quiet in recent years, with just one MMA fight in 2017 and one in 2018, but he has also competed in bare-knuckle boxing during this stretch. This will be his first MMA fight of 2019.

Ruiz never even enjoyed anywhere near Grove’s level of success. The “A-Train” debuted in 2013 with Gladiator Challenge. Even in the earliest days of his career, Ruiz failed to gain much traction. He was just 14-9 when he made his first Strikeforce appearance in a losing effort against Trevor Prangley. Overall, Ruiz, now 41, registered just one win and four losses with Strikeforce. He didn’t return to a major American promotion again until 2014 with Bellator, but he is now winless through three contests with the world’s No. 2 MMA organization. Ruiz also has just one win through his last seven fights.

This fight probably won’t mean much in the bigger scheme of things. It’s really just a local show with Grove as its draw. The company found him a winnable fight against a reliably unreliable Ruiz. The Strikeforce veteran’s last truly significant wins came roughly a decade ago.

The only way this fight is likely to go sideways for Grove is if he messes up and lands on his back with the bigger Ruiz on top of him. The Hawaiian tends to crumble under the pressure of a barrage of strikes, and Ruiz is still capable of delivering that type of offense. However, Grove’s length is going to be a nightmare for the seasoned vet. Both men have a 79-inch reach, but Grove is four inches taller and fights a far more rangy game. Ruiz isn’t easy to drop — he only has three knockout losses — but he’s weak against a solid grappling attack, which Grove has in spades. Grove will eventually get this fight to the mat and coax a tapout from his opponent.