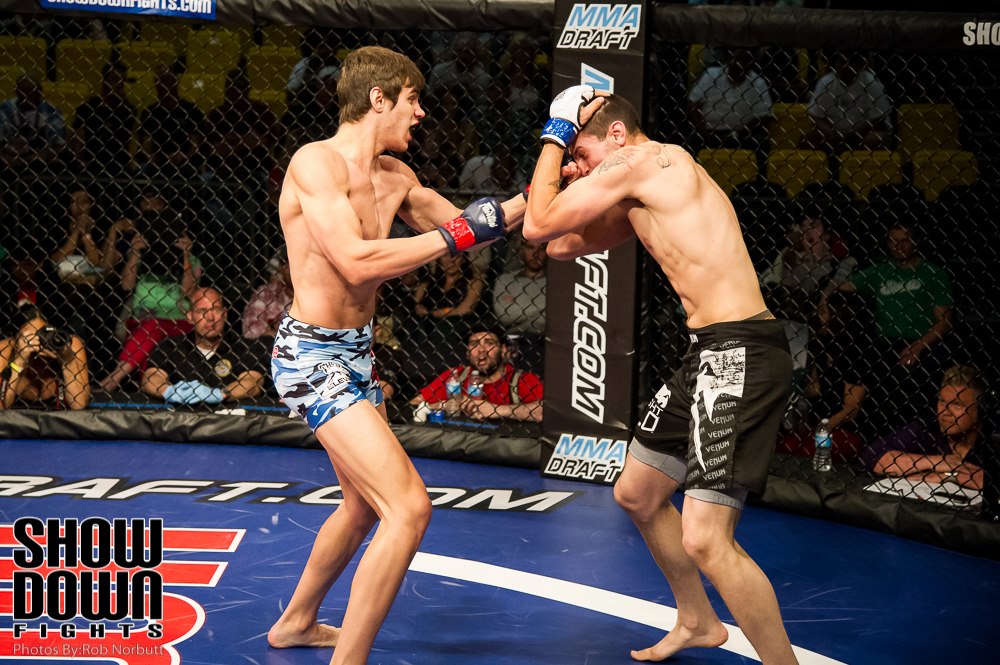 There are many young talented fighters on the upswing toward big things in mixed martial arts. They all dream of carving out a name for themselves in the ultra-competitive landscape of the sport. For some, that task will be just a little bit harder to accomplish. That’s not due to a lack of talent, but because of other uncontrollable circumstances.

That is the position 21-year-old Adam Nijem finds himself in as he embarks on his fighting career. Fans of the sport will easily recognize his last name thanks to his brother, Ramsey, who has competed inside the UFC’s Octagon a total of nine times. Adam is trying to make his own name, but it can be difficult to step out from the shadow of an older brother who has had success within the sport.

“Personally, it’s one of those things that is a good thing and it’s a bad thing,” Adam admitted to Combat Press. “I like people being able to recognize my last name very easily, but also there is also a [preconceived] notion to what people think about me. My brother and I are very different fighters. When you guys see me fight, I am not going to fight [in] any way like my brother. When you see me, it is going to be a lot different aspect [to] how we fight, and I am excited to prove it this Friday.”

It is already a tough task for any fighter to stand out from the rest of the crowded talent pool. Though Nijem will no doubt have an uphill battle with that side of things, he is confident he has the tools to accomplish what so many fighters try and fail to do.

“I can set my name apart mainly because of my style of fighting,” he explained. “Also, with the exposure I’m going to get fighting for a cool promotion I fight for right now. They give me great exposure in such a young point in my career. A lot of time, as well, it’s actually funny, you talk to a lot of guys coming up and they can’t market themselves. That’s one thing I’m going to be able to show and use, is to be a marketable fighter. I’m going to be a smart fighter, not just one of these fighters that goes in there just to fight just anyone or anything like that. It will be a lot easier for all these different companies and promotions to gain business through me.”

Nijem doesn’t want to fight just to fight. He wants fights with a purpose. He already has a plan and a vision of where his career can possibly take him. What better to place get him there than fighting for Titan FC this early in his career?

Titan FC has had many great talents fighting inside its cage doors. Fighters, who once called the promotion home, have gone on to great things in the sport. That type of name and reputation for a promotion can lure the type of fighters Nijem is seeking.

“Titan FC, you see them all the time in the news signing better and better fighters for their promotion, and that is just going to be better for me at the end,” Nijem said. “They are building the 155[-pound] weight class pretty well right now, and I am glad to see it grow and looking forward to fighting some of these guys.”

Some may say to be careful what you wish for, especially for someone as young as Nijem, when looking to fight on some of the bigger stages the sport has to offer. His upcoming bout, which takes place on Friday night at Titan FC 33 at the Brookley Aeroplex in Mobile, Ala., will be broadcasted to a nationwide audience.

“I love fighting on CBS Sports,” he admitted.

This is exactly what Nijem wants. We won’t have to wait long to find out if he is biting off more than he can chew at this young stage of his career. That’s because Nijem, at just 2-0, is set to enter the cage against 11-fight veteran Marcus Edwards. Nijem has never before encountered an opponent like Edwards, who has extensive experience and some credible wins to his name.

“I’m actually really excited,” Nijem confessed. “He is going to be the most experienced fighter that I have fought inside the cage. What I am going to be able to show is my skill level. He’s probably going to look at me like I don’t have much of a record or anything like that, but I told Titan right away, ‘I want to fight the toughest guys, and I want to show you guys I can finish all the toughest guys.’ They complied and gave me a very tough opponent, and that is exactly what I wanted.

“The tougher the guys I get to fight, that is just the better it will be for me. When I go in there and I stop all these so-called ‘tough’ opponents, and I go and stop them in the first or second round, you guys won’t have any question why I should be fighting in the UFC.”