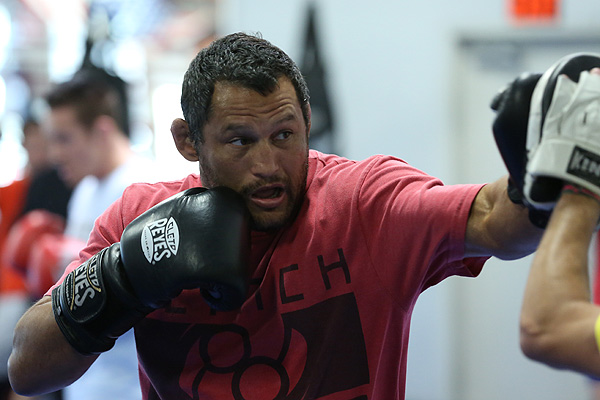 UFC 204: If Dan Henderson Wins, Should He Retire as Champion?

Well, MMA legend Dan Henderson is essentially at this point in his career. The former Pride and Strikeforce champion just turned 46 in August, and he is out to win one more MMA title when he clashes with newly crowned UFC middleweight champion Michael Bisping. According to Henderson, regardless of the result, he will retire right after.

Of course, everyone’s preference would be to win the title and retire. Everyone wants to finish on top. However, the question for Hendo then becomes whether he would still be considered a true UFC champion if he doesn’t defend the belt.

Henderson would go down as a champion in the record books, obviously, but how about in the eyes of fans and fighters? The answer is more nuanced. We’re talking about a guy who has already won titles in other organizations, therefore already garnering the status of a legend and a champion no matter what.

Nobody is going to question this potential missed accomplishment, mainly because of everything he has already done in his career, let alone fighting in his twilight years when he could have hung up his gloves a long time ago.

There would always be a huge “what if,” though.

When it comes to winning a championship in combat sports, there’s the widely held belief that a fighter is not a champion until they have defended their belt. As many people know, anything can happen in a sport where two people are trying to hurt each other. Every fighter has a puncher’s chance. So, usually, to prove a win was not a fluke, it’s fair to say that the fighter should defend the belt they won.

Anyone who has watched the sport of MMA knows that there have been a lot of UFC champions who won once, but subsequently lost their next fight, faced really unqualified opponents or were awarded a win when they didn’t deserve it. This stuff happens all the time, and while every case is not identical, many would agree that the noble thing to do is to defend the belt.

Now, if a fighter doesn’t care what people think, then they should do as they wish. Usually, it’s the athletes who don’t care how they are judged that are mostly judged the least. Some want to just go out in a blaze of glory. Others want to prove something to people.

There’s no telling if that is the case with Henderson. He seems like a pretty chill, laid-back guy who can take as much mental and physical punishment as possible. He’s been a champion in multiple organizations, so he doesn’t really have a ton to prove, especially since this isn’t his first shot at UFC gold — and he does have a middleweight tournament win from the UFC’s early days. This is why it makes sense for him to make one final, valiant effort to win a UFC belt and call it quits, win or lose.

Again, this is not the only shot Henderson has had at a UFC belt. He previously fought for the light heavyweight and middleweight belts in back-to-back fights just seven months apart in 2006 and 2007. This will be his third modern UFC title fight, but this time he’s facing someone he’s already beaten, which makes this opportunity much more compelling.

How sweet would it be to beat the guy you knocked out in devastating fashion seven years earlier, but this time for a championship while competing in his home country? The storylines here are endless. The stars are aligned on Oct. 8 at UFC 204 in Manchester, England, when Hendo takes on his old nemesis, Michael Bisping.

Henderson’s previous title fights came against Quinton “Rampage” Jackson and Anderson Silva. These fights were not walks in the park, and neither is this rematch with Bisping, who has improved a lot over the last seven years. With recent wins over Silva and Luke Rockhold for the title, Bisping is well on his way to maintaining the momentum going into his home country, especially knowing that he’s facing someone who knocked him out cold more than 100 pay-per-views ago.

While redemption is on the mind of the champion, proving it wasn’t a fluke is on the mind of his opponent, too. So when you think about it, what else does Henderson have to prove after his fight with Bisping? He’s done more than enough.

While this will be a big fight for both guys, Henderson finally winning it in what is supposed to be his last fight will be an amazing end to an amazing career that fans will appreciate forever. Whatever ends up happening, Henderson should be appreciated as not only a champion, but as a great individual and an ambassador of the sport. A championship around his waist would just be the cherry on top.