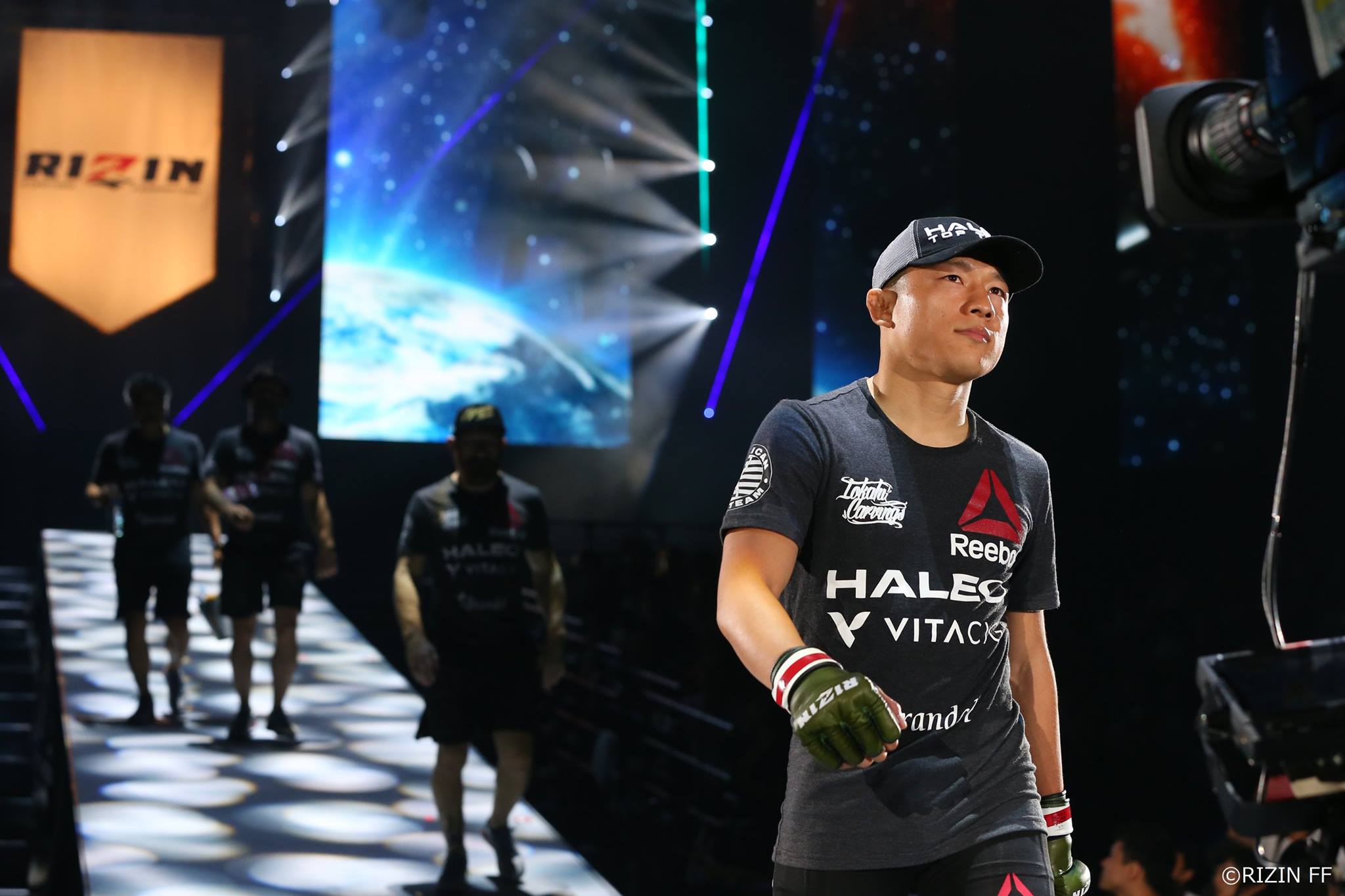 Out of Obscurity: ONE Championship, CFFC 77 and Rizin 18

The focal point of ONE Championship’s Dreams of Gold show is definitely not MMA. With flyweight kickboxing champion Petchdam Petchyindee Academy in the headliner and two kickboxing tournament bouts on the card, this event puts MMA in the backseat. This doesn’t mean the lineup is devoid of notable MMA contests, though. Perhaps the most interesting of these fights is the bantamweight showdown between Yusup Saadulaev and Dae Hwan Kim.

Saadulaev is a longtime mainstay of ONE, dating back to the league’s days as ONE FC. The 34-year-old, who debuted in 2008, first came to prominence with the Dream organization. He went 1-1 with the now-defunct organization. His first ONE stint got off to a rough start as well, with losses to Kevin Bellingon and Leandro Issa. He recovered to win his next two fights with the promotion, including a split verdict over Adriano Moraes. After bouncing around between the regional circuit and ONE for his next few outings, he has been exclusive to ONE for his last three fights. During this stretch, the “Maestro” has scored wins over Jordan Lucas and Masakazu Imanari. However, his most recent effort ended in a knockout loss to Thanh Le. The Russian fighter relies heavily on submissions for his victories.

The 32-year-old Kim has a far more balanced set of results, with four knockout victories and six submissions. “Ottogi” made his professional debut in 2008 and went 8-0-1 before entering ONE in 2013. His early success with the company led to a title showdown with Bibiano Fernandes, but Kim was submitted by the jiu-jitsu ace in the second round of their fight. It’s been a roller-coaster ride since then, with the South Korean fighter claiming wins over such notables as the aforementioned Imanari and Jumayi Ayideng while also suffering losses to the aforementioned Issa, Daichi Takenaka and Shuya Kamikubo.

Despite a few setbacks, Saadulaev has demonstrated far more consistency in his performances against tougher competition. Kim, meanwhile, has had mixed results. The South Korean fighter is a threat regardless of where this fight goes, but he’s likely to struggle on the ground with someone with Saadulaev’s talents.

Kim’s best chance for victory comes in the striking realm. Le was able to finish him with strikes, and so were Bellingon and Koetsu Okazaki. However, it’s going to be difficult for Kim to avoid the ground game for the duration of the fight. Saadulaev’s strong grappling game makes him the favorite to score the finish.

Cage Fury Fighting Championships is back for its 77th show. The league will crown a new welterweight champion by the end of the night. The two title hopefuls are Joey Pierotti and Jeremiah Wells.

Pierotti made the shift to the pro ranks after posting a 5-0 mark at the amateur level. His pro debut came in 2016, and “Mama’s Boy” went on to win his first eight contests. His only setback came in a CageSport lightweight championship bout against Tristan Connelly, who was able to submit Pierotti in the fourth round. The 29-year-old has since rebounded to the tune of four victories, including two wins under the Cage Fury banner against David Mundell and Manny Walo.

In terms of his win-loss mark, Wells might seem a little on the weak side as a title contender. However, his 22-second starching of Mumia Abu Dey Ali at CFFC 76 was a huge statement. The victory turned heads and allowed Wells to punch his ticket to stardom with the Northeastern promotion. Wells also fought admirably in his two career defeats, where he took the aforementioned Walo and Vinicius de Jesus the distance. The 32-year-old posted a solid 7-1 ammy mark before turning pro in 2012. His resume looks strong, with victories over Jon Manley and Jason Norwood. Ali wasn’t his first quick finish either — Wells stopped Gary Balletto Jr. in just 57 seconds.

Pierotti is something of an enigma. He stumbled against Connelly, who was 9-6 at the time and now sits at 13-6, but he was able to overcome the likes of Walo and Mundell. Meanwhile, his resume is also padded with victories over guys with awful records like 15-37, 0-9, 2-12 and 6-37. Wells, on the other hand, has never had a pro fight against a sub-.500 opponent. He was able to outwork Manley and Norwood, and his losses came to Bellator and World Series of Fighting veterans.

Pierotti has the flashier record, but Wells might just be the better overall fighter. His power is undeniable, and he’s only lost to very solid competition. While Pierotti will surely put up a fight, this one could go to the perceived underdog on the scorecards.

Asia is the place to be for MMA this weekend, especially when Rizin touches down at the Dolphin Arena on Sunday for the promotion’s 18th numbered event. The cast is strong, with appearances by Ayaka Hamasaki, Victor Henry, Takeya Mizugaki, Wayne Parr, Kanna Asakura, Alesha Zapitella and more. The biggest fight, however, is the bantamweight clash between Kyoji Horiguchi and Kai Asakura.

Horiguchi has established himself as a top bantamweight after already making the case as one of the world’s top flyweights. The former UFC title challenger has been on quite the run with Rizin since departing the UFC while on a three-fight winning streak. The 28-year-old won his first seven fights with the Japanese organization. This included victories over Yuki Motoya, Shintaro Ishiwatari, Ian McCall and Hiromasa Ogikubo. After a superfight in the kickboxing realm against star Tenshin Nasukawa, Horiguchi returned to MMA action with a Rizin bantamweight title win over Darrion Caldwell. His next fight was a stoppage of Ben Nguyen. Most recently, he added the Bellator MMA bantamweight crown to his collection with a second win over Caldwell. The UFC veteran’s only career losses came in a 2012 bout against Masakatsu Ueda and his 2015 title bid against Demetrious “Mighty Mouse” Johnson.

The 25-year-old Asakura’s resume pales in comparison. After an 8-2 amateur run, Asakura made his pro debut in 2012. After five years, he had amassed an 8-0 mark that landed him in a Road FC featured bout opposite Je Hoon Moon, who stopped the youngster via strikes. Asakura then made his way to Rizin, where he finished Kizaemon Saiga and squeaked by Manel Kape via split decision. He has gone on to add two more Rizin wins to his tally, including a decision over Moon to avenge his one career loss.

Horiguchi has shared the cage with some of the very best in the business. He’s emerged as the victor against the likes of Darrell Montague, the aforementioned Ogikubo (twice), Ali Bagautinov, McCall and Caldwell (twice). He destroyed McCall in just nine seconds. Only Mighty Mouse scored a convincing victory over him.

Asakura is a solid prospect, but he’s dealing with an elite opponent. Horiguchi has utterly destroyed some of his recent opponents and outworked others. Asakura stopped a lot of very low-level opponents on his way up the ladder, but he’s been forced to go the distance more frequently in recent outings and even suffered a loss via strikes, which is significant in the context of this fight. Horiguchi’s fists are likely to be way too much for the prospect. The UFC veteran should have his hand raised after a highlight-reel knockout finish.