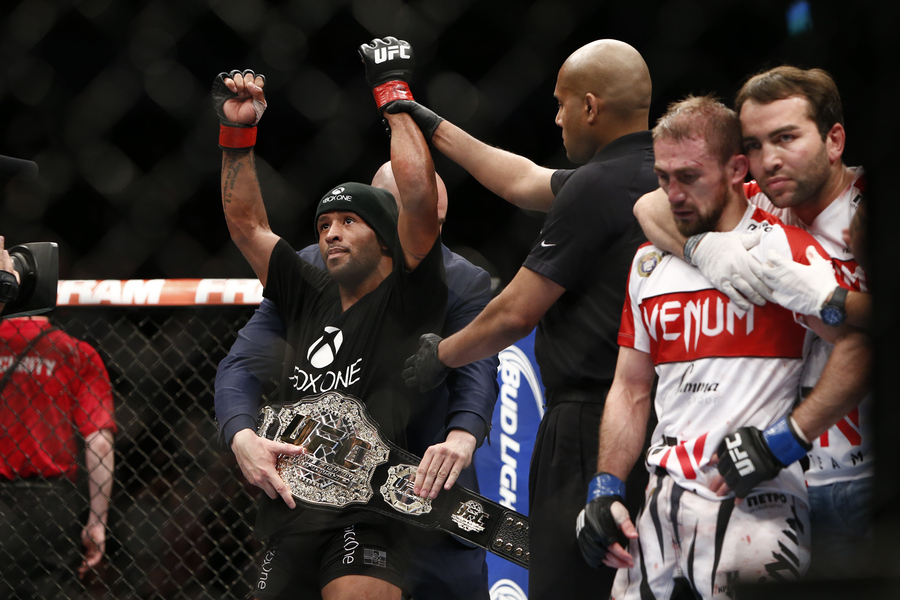 All the headlining fighters for UFC 186 stand under six-foot tall but face a monumental task ahead of them. The UFC’s two smallest male divisions face the challenge of creating a buy rate that will finally put the lighter weight classes on the mainstream map.

Luckily for all parties involved, the headlining fight has a readymade storyline woven in. T.J. Dillashaw stepped in for an injured Raphael Assuncao at UFC 173 and wasn’t given much of a chance to be anything besides a mobile heavy bag for then-champion Renan Barao. It didn’t take long for Dillashaw to let Barao know he was there to collect more than just a paycheck.

After dominating much of their championship bout, Dillashaw finally secured the TKO stoppage in the fifth round. It was the consensus “Upset of the Year” for most MMA media outlets. Despite the heavy damage suffered by Barao in their contest, the two men were paired up for an immediate rematch at UFC 177. However, Barao slipped out of his hotel room tub, hit his head against the wall and was rushed to the hospital. The incident led Dillashaw to levy some harsh words toward the Brazilian.

“(Barao) is scared. He doesn’t want it,” Dillashaw said. “His coaches wanted the rematch more than he did. He’s never missed weight before. It’s kinda funny he does it now.”

Dillashaw would still compete at UFC 177, defending his title against the game Joe Soto. Barao would come back in December and also pick up a victory, via submission over Mitch Gagnon. After Dominick Cruz ran into another injury setback that prevented him from competing for the belt, Barao and Dillashaw were once again paired up for UFC 186.

Barao and Dillashaw represent two of MMA’s top gyms, Nova Uniao and Team Alpha Male respectively. The two gyms also house some of the best talent under 155 pounds in the UFC. Following Dillashaw’s impressive win over Barao, the Brazilian’s name was put on a sign-up sheet for a Bang Muay Thai seminar at Team Alpha Male. Barao’s teammate, Jose Aldo, didn’t take kindly to the joke, saying they’d get payback for it.

Heading into their rematch, Dillashaw is confident he’ll make quick work of the former champion.

“I plan on finishing him a whole lot faster than I did the first time and get this guy behind me and put him on the back burner,” Dillashaw said during an interview on The MMA Hour. “I’m tired of hearing this guy’s name and I feel like I am just his kryptonite. I am going to demolish him this fight.”

While the main event has the makings of an intense rivalry, the same cannot be said of UFC 186’s co-main event. Demetrious “Mighty Mouse” Johnson will defend his UFC flyweight strap against the surging Kyoji Horiguchi. It’s an interesting pairing, in that Horiguchi recently said after his UFC 182 victory that he did not feel he was ready for a title shot, a statement that is in contrast to his words from September 2014. Horiguchi is riding an impressive streak of nine consecutive victories, and after John Lineker’s weight issues, Horiguchi now stands as the most qualified title challenger.

It has to be tough for the UFC to find a capable opponent for Johnson after the flyweight champion has looked extremely dominant since claiming the title. Johnson hasn’t lost since 2011 and has made it look easy since dropping to flyweight. The division’s first and only champion is quickly running out of challengers, evident by his title defenses against Chris Cariaso and now Horiguchi. The UFC has to believe that this is nothing more than a “stay busy” fight for Johnson while Mighty Mouse waits for John Dodson’s return, which should come soon. Even if the UFC doesn’t believe this, UFC fans certainly do.

One thing that should definitely help the headliners is the rest of the UFC 186 lineup. At UFC 173, Barao vs. Dillashaw was perceived as a weak main event and Daniel Cormier vs. Dan Henderson was about as lopsided as a fight on paper can get. At UFC 174, the same situation happened with Johnson’s title defense against Ali Bagautinov. The fight was perceived as a less-than-ideal main event, and Rory MacDonald’s showdown with Tyron Woodley was the next best thing. That’s not the case at UFC 186, which features a stacked lineup of established names, but not to the point where they will steal the show from the featured title matches.

This is the best chance the smaller weight classes have at proving a point to the UFC. Guys like Aldo complain about wanting to make more money, and UFC 186 being a hit at the box office will go a long way in helping the smaller guys get paid more. The ingredients are all there for success in terms of pay-per-view buys.