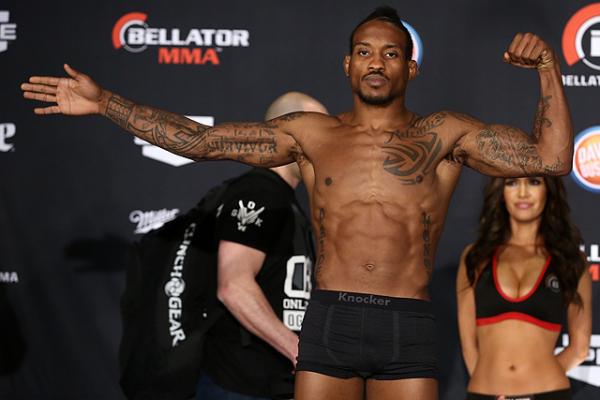 Bellator 132’s Bubba Jenkins: Ready to Trust in His Hands

What’s the best way a promoter can tell an up-and-coming fighter that he is destined for greatness? Give him the toughest fight of his young career.

In just three years, Bellator’s Bubba Jenkins has been on a meteoric rise in the world of MMA. After a successful wrestling career and a 2011 NCAA Division I Championship at Arizona State University, the 26-year old has racked up an impressive pro MMA record of 8-1 between his appearances in Tachi Palace Fights, Resurrection Fighting Alliance and Bellator.

Jenkins made his most recent appearance against Thiago Meller at Bellator 126 in September. He took the fight by unanimous decision, marking only the second time that he went the distance. While he would have liked to finish the fight, like he normally does, he was able to learn from the experience.

“My biggest takeaway is that I need to trust in my hands,” Jenkins told Combat Press. “I’ve got great hands, and I’ve stood up with a lot of people. In the Poppies Martinez fight, I didn’t trust my hands. You know, I threw one or two punches and connected on a couple of them, but I really didn’t trust my hands like I should have, and I went into my wrestling a lot sooner than I should have. This fight, I needed to trust in what I know, trust in my training and trust in what they’ve taught me.”

Now on a four-fight winning streak, Jenkins is set to encounter his most formidable opponent yet. Tonight, at Bellator 132, live from the Pechanga Resort and Casino in Temecula, Calif., he will face former World Series of Fighting featherweight champ Georgi Karakhanyan.

Karakhanyan is coming off his first loss in 10 fights. He dropped his WSOF title to Rick Glenn at WSOF 10 in June. The 23-4-1 veteran is no stranger to adversity and will be looking for a big win as he faces Jenkins tonight. Jenkins knows his opponent has an impressive pedigree and is honored to take the challenge.

“He’s got experience, he’s been around, he’s seen it all [and] he’s got plenty more fights than I have, so it’s amazing that I’m getting this match-up. Because, if I was as experienced as him, I would almost feel disrespected fighting a guy who only has eight or nine fights,” Jenkins admitted. “I was thinking that the reason I’m getting this fight is because Bellator really trusts in me and wants to see where I’m at. I’m stepping up in the game, and these are big names, big fights and big people, so we’re going to try to go out there and prove the world wrong. I can do this.”

The obvious underdog, Jenkins is hot right now. Having finished two of his last four opponents, he is no slouch in the cage. Outside of his tremendous wrestling game, he is continuously improving his striking.

“My stand-up has improved,” said Jenkins. “I’ve gotten more comfortable with my punches and things like that. It’s not something I take lightly as I’m practicing and getting better. When I’m in the mix — when I’m doing the things I need to do, as far as in the gym — I expect to display that when I get out there in the cage.”

Working with guys like Tiki Ghosn, Paul Herrera and Cameron Underhill has continued to pay off for the young grappler. His MMA game is constantly evolving and he is prepared to take Karakhanyan by storm.

Ever since moving to California from American Top Team in Florida, Jenkins has been on a tear, and he doesn’t expect that to end anytime soon. Tonight, the world will finally get to see how he performs against his toughest opponent yet. After that, he can finally get back to his wife, Ashley, and son, Jream.

Jenkins would first and foremost like to thank God. As a very spiritual man, he relies on his higher power for guidance and healing. He would also like to thank his family, friends, coaches and teammates for helping him on his journey to MMA greatness. Follow Bubba on Twitter: @2sinsurrJenkins
Advertisement