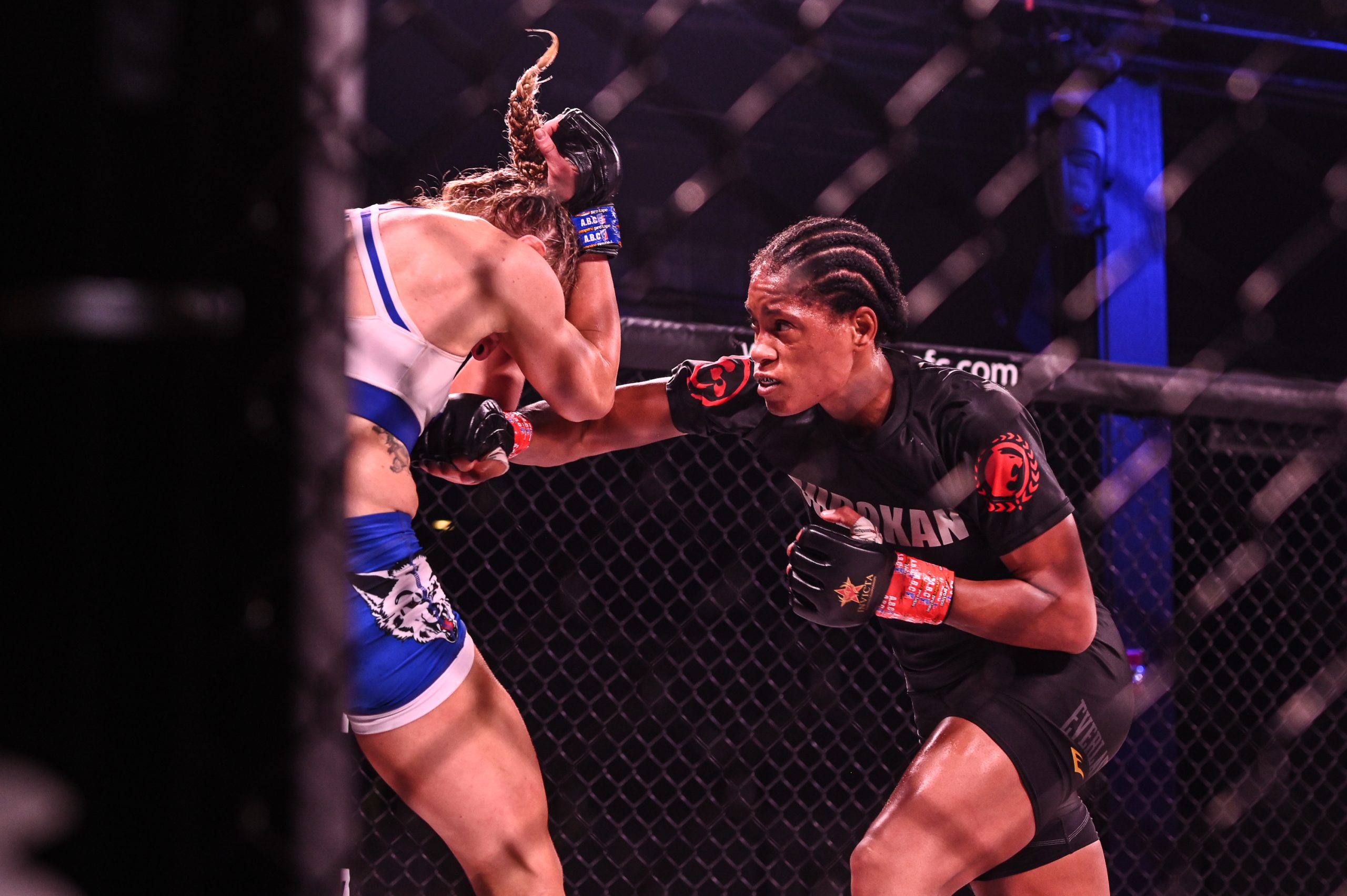 On Wednesday, Jan. 18, Invicta FC lands back at Reelworks Denver in Denver, Colo. for the third time in four events, as Invicta FC 51 will showcase two title fights. The main event will be the second bantamweight title defense for champion Taneisha Tennant. Tennant picked up the vacant title in Aug. 2021 with a decision win over Lisa Verzosa. Nearly a year later, she first defended her belt against Olga Rubin at Invicta FC 48 for the organization’s first show in the Mile High City. This time, she will be taking on UFC and Invicta veteran Talita Bernardo.

Bernardo is currently riding a three-fight winning streak since being released from the UFC, with her last two being back-to-back second-round submissions under the Invicta banner. With both ladies eyeing a UFC contract, this fight should be a barnburner.

The co-main event will crown a new flyweight queen, when Kristina Williams and Ketlen Souza battle for the vacant strap. With both of these ladies riding winning streaks of three or more, they will be carrying a ton of momentum as they step into the cage on Wednesday night.

The remainder of the eight-fight card features many talented up-and-comers, in addition to two exciting bantamweight battles, featuring Claire Guthrie vs. Auttumn Norton and Serena DeJesus vs. Olga Rubin

Taneisha Tennant won and defended her bantamweight title with back-to-back decision wins; will she be able to do enough to retain her belt against Talita Bernardo, who has submitted her last two opponents?

Invicta really put together one hell of a match-up with this bantamweight title clash. Taneisha Tennant may only be 5-1 as a pro, but the current champ came up through Invicta’s Phoenix Series before the COVID-19 lockdowns in 2020, and, other than one decision loss at Dana White’s Contender Series six months later, she has been successful in securing and retaining the title. She is a dominant striker with good wrestling, and, although she has only finished one fight, in her pro debut, she is a tough out for anyone.

As for the challenger, Talita Bernardo, it’s hard to ignore the fact that she already has that UFC experience. She fought four times in the Octagon, before her release in Mar. 2021, and she went 1-3 in the promotion. However, after that, she was able to win a unanimous decision over fellow UFC vet Lucie Pudilová at Oktagon 26 in Jul. 2021, and that was the Czech fighter’s only loss in her last seven fights, including her return to the UFC last August. Bernardo’s last two fights were back-to-back submission wins in Invcita, but against hardly notable opponents. Yana Gadelha, who was 7-4 at the time, had never beaten an opponent with a winning record, and Katharina Lehrner has not won an MMA fight in the last five years. She will be facing a significant step-up on competition when she faces Tennant.

This is really a tough one to predict. Tennant has the distance advantage with three inches in height and two inches in reach over Bernardo, but the Brazilian is a black belt in jiu-jitsu, who has multiple finishes on record. Bernardo has the experience advantage, but Tennant has some serious physical strength to deal with. Tennant, though, has not faced anyone with the same grappling skills as Bernardo, and that could be the big issue here.

Tennant will come out pushing the pace on the feet with her superior striking, and will likely repeatedly stuff Bernardo’s takedown attempts. However, those takedown attempts will wear down the champ, and, as the fight progresses, her cardio could take a hit. If Bernardo can refrain from taking too much damage on the feet and get Tennant to the ground, I can see her walking away with a third submission win in a row and a new crown.

Both Kristina Williams and Ketlen Souza are currently on impressive winning streaks; which flyweight will stay on track and pick up the vacant title?

33-year-old Kristina Williams is a badass Bellator vet, who has gone the distance with Valérie Létourneau and former Bellator champ Emily Ducote. Also, she broke pro boxer Heather Hardy’s nose in an MMA fight, and her last two losses were to former Bellator champ Juliana Velasquez and title contender Denise Kielholtz. Since joining Invicta, she has won back-to-back fights, bringing her winning streak to three, and she scored a first-round submission over Liana Pirosin last July. Her opponent, Ketlen Souza, might look better on paper, but that is debatable.

The 27-year-old Souza is currently sitting at 12-3, but many of her fights were in smaller regional shows in Brazil, and most of her wins were over opponents with little experience. She made her Invicta debut back in Sep. 2022, when she picked up a decision win over then 8-6 Maiju Suotama. Williams will, by far, be her biggest step-up in competition, and this is going to be a tough one to win.

In addition to Williams’ experience, she will have a whopping five-inch height advantage and better overall striking skills, when compared to Souza. I have Williams using her superior size and striking to overwhelm the Brazilian and stuff takedown attempts, before eventually scoring a TKO victory.

The battle between Brazil’s Elisandra Ferreira and American Marisa Messer-Belenchia should be an interesting one. Not saying that this will be “Fight of the Night” or anything, but the match-up is a head-scratcher.

31-year-old Messer-Belenchia has been a very active fighter, who has already fought in CES and Invicta, has some pro boxing experience, and also competed in the Invicta Phoenix Atomweight Tournament in 2021, where she won one and lost one.

Seven years the younger, Ferreira has never fought in the U.S., and her last fight was for the PAWFC atomweight title in Canada in Aug. 2022, where she dropped a technical decision. This was a very controversial loss, as the fight ended after Anastasia Nikolakakos landed a knee to the head while Ferreira was on the ground, and this was after Nikolakakos clearly committed repeated fouls.

With no idea on how this fight will actually progress, it will be a great one to keep an eye on.