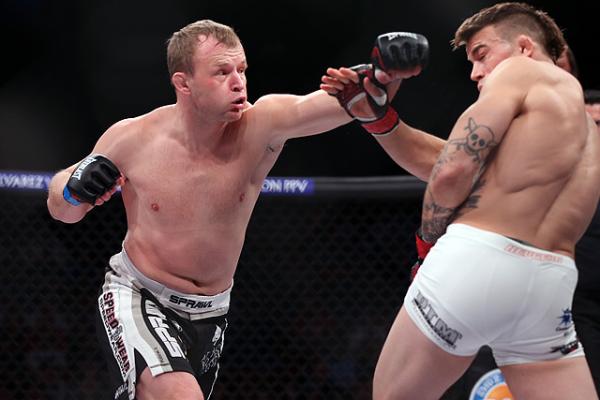 Bellator MMA takes a trip to Memphis, Tenn., and the FedEx Forum for Bellator 162, which features a four-fight main card.

The main event marks the return of former Bellator middleweight champion Alexander Shlemenko, who will fight for the first time in Bellator since a knockout victory over Melvin Manhoef in February 2015. The knockout victory was later overturned to a no-contest when Shlemenko failed a drug test. UFC veteran Kendall Grove is Shlemenko’s opponent. Grove will look to extend his streak to three straight victories. He’d love to add a big name to his resume and make another trip to a title fight under the Bellator banner.

The co-headliner has professional wrestler Bobby Lashley moving back to the MMA scene. He’s out to grab his 15th victory when he faces fellow heavyweight Josh Appelt. Lashley hasn’t fought since he beat James Thompson in their rematch with a first-round TKO almost a year ago. Appelt is currently riding a two-fight winning streak and is making his return to Bellator after a 3-1 stint the last time around.

Middleweight Hisaki Kato will also make the trip back over to MMA. He’ll take on AJ Matthews on the main card. Goiti Yamauchi will take a step up to the lightweight level to face Ryan Couture.

The preliminary card of Bellator 162 will air on Bellator.com beginning at 7 p.m. ET. The main card airs live on Spike TV at 9 p.m. ET.

Alexander Shlemenko is back. Does he still have another Bellator title run left in him, or will UFC veteran Kendall Grove put a quick end to that notion?

Middleweight is a very shallow division now with the release of former champion Brandon Halsey, so to rule both of these guys out is pretty laughable. Shlemenko was once one of the better fighters in Bellator, and that alone puts him near the top of the list right now. He may not be a company man along the lines of Joe Warren, but Shlemenko has cemented himself as a staple of the Bellator promotion.

The crazy thing about this fight is that Shlemenko is going to be wildly undersized in comparison to Grove. We’re talking a six-inch height disadvantage and a nine-inch reach disadvantage for the former Bellator champ. Shlemenko hasn’t done well in his recent fights against bigger opponents with experience. Tito Ortiz and the aforementioned Halsey used their size and strength to manhandle the Russian striker. If Grove can use his size effectively, it will be a tough fight for Shlemenko.

Grove has used his range very well and developed some power in his last couple of fights. His last two victories came by knockout. Shlemenko will need to close the distance and work Grove against the cage to nullify the UFC vet’s size advantage.

Grove has actually looked decent in his last two fights, which makes this a difficult pick. Shlemenko has technically been on the shelf due to a suspension, but he has fought twice back home in Russia, winning both fights. Shlemenko should get back in the win column here, but the outcome of this one is honestly a flip of the coin.

Bobby Lashley has put together quite the run since joining the Bellator ranks. Is it time to start taking the former WWE superstar seriously as a heavyweight contender?

You mean we haven’t taken him seriously already?

Jokes aside, yeah, it’s probably about time that Lashley gets a legitimate heavyweight across from him. His current opponent, Josh Appelt, is a good start. Appelt is 12-5, a large improvement over Lashley’s typical opponent who either barely has a winning record or hasn’t fought anyone decent. Yet, Appelt isn’t a name off which contenders are built.

Lashley hasn’t really fought anybody yet that could truly boost his stock. If he were to fight someone higher up the ladder like, say, Matt Mitrione, it could possibly result in a big setback for the 40-year-old when he loses. Yes, loses. Lashley’s skills haven’t really improved to put him in the level of a top-tier heavyweight. Lashley is 14-2, which is a very hard mark to achieve, so he should be facing top competition at this point, even if he isn’t there himself.

Lashley’s grappling needs some work. His striking is lacking, too. Furthermore, there’s always the question of his gas tank. Lashley likes to rely on his wrestling and power advantage to take out anyone who stands across from him. However, when that someone has the skills to keep Lashley from scoring the finish, things can get rough for the pro wrestler.

It’s difficult to determine just how much drawing power remains for Lashley following his victories over low-level opponents. He is gradually climbing the ladder — Appelt is a step up from the aforementioned Thompson — and he is going to win this fight just like he has won most of his other fights. It will be a wrestling clinic from Lashley as he works to get the fight to the ground using his brutal power advantage. Then, it will either be attempted submissions en route to a decision victory or a TKO in the second round. Either way, the fight goes in favor of Lashley.

This card features five undefeated fighters: Ronnie Lawrence, Eryk Anders, Tyler Hill, Jaleel Willis and Omar Johnson. Which, if any, of these fighters is poised to become a breakout star for Bellator?

Let’s reserve any judgement on Lawrence for now, because it’s too early to make an informed guess on his future. Hill is an interesting choice if he can get past Wade Johnson. Anders is a solid pick as well. His fights have been entertaining, and he has finished three of his four opponents. However, the one real standout here has to be Willis.

Willis impressed in his World Series of Fighting debut against Chauncey Foxworth. He needs to work on his striking a little bit more. He likes to close the distance to secure the takedown, and he showed off his abilities with some nice trips and throws against Foxworth that eventually led him to a 30-27 unanimous decision on all three scorecards. The fight provided some insight into what Willis can do. He does need to work on his defensive grappling. He allowed Foxworth to hip escape and reverse to stand back up. He can’t let opponents scramble out of bad positions so easily in the future. Luckily, Willis is relentless in getting the takedown, so he was able to get Foxworth back to the ground immediately. However, he can’t expect every opponent to give him such easy takedowns.

All of these guys are green and could use some work, but Willis, who faces fellow undefeated fighter Omar Johnson, truly does stand out among this group of fresh prospects.

We haven’t talked about Kevin Ferguson, Jr. yet. His fight against Rick Bing is the sleeper from the preliminary portion of this card. Ferguson, the son of the late Kimbo Slice, has his father’s power and then some. He looks extremely dangerous in the striking game and could put anybody on their back if given the chance.

However, let’s not stop at one sleeper pick. Here’s a second one: Goiti Yamauchi’s showdown with Ryan Couture. Yamauchi’s last fight, which ended in a loss to Bubba Jenkins, was a huge letdown. Couture is a good grappler, which should make this a very fun fight to watch unfold on the ground. Yamauchi has slick grappling and submission skills, both on top and off his back. We should see if he learned from his prior mistakes against Jenkins and can add Couture as the signature win on his resume.