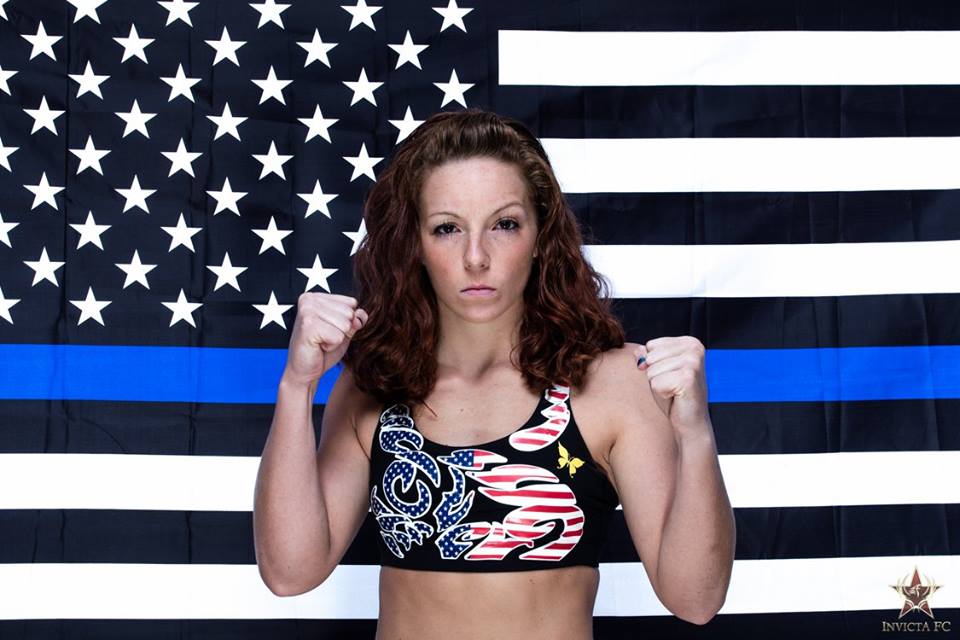 Invicta FC 25’s Amberlynn Orr: ‘Everything Happens for a Reason’

You know that excitement you feel whenever an event you enjoy and partake in is about to happen? Now imagine it gets canceled, just when it’s set to begin. But, wait, it’s back on again! And then it’s gone, canceled again. Back on again. Off again. Sometimes, this happens in the fight game, because the fight game is cruel and doesn’t care what you think.

Invicta FC fighter Amberlynn Orr, whose pro record currently sits at 0-1, has learned this the hard way, again and again. Yet, here she is. She stands, ready to fight on.

“I’ve actually been trying to fight for a couple months now,” Orr told Combat Press. “I was supposed to fight in April, started a training camp for that and it ended up falling through. I was trying to get on the May card for Invicta, but couldn’t find an opponent. I was supposed to have a fight back home in Memphis, was two weeks out and couldn’t find me an opponent. I was initially supposed to fight Kelly McGill [at Invicta FC 25] and I got an email that the fight was off and they were looking for another opponent for me, so I was like, ‘Jesus, don’t let this happen again.’”

In case you lost count, that’s three fight cancellations in less than six months for Orr. McGill, who was lured away by a fight on Dana White’s Contender Series, was just the latest on the list. It appears that Orr’s misfortune might be coming to an end, though.

“It took a couple days [after McGill’s withdrawal] and they asked a couple girls and we weren’t getting anywhere,” said Orr. “Then they asked me about Sarah [Kleczka] and I said let’s do it. At this point, it doesn’t even matter. I don’t care. I want to fight. Sarah accepted and I’m excited.”

On Thursday, Orr will finally step into the cage and compete. The setting is the Tachi Palace in Lemoore, Calif., for Invicta’s landmark 25th event. Orr will strive to regain the form that made many view her as a legitimate prospect in the women’s bantamweight division. Her pro debut, which came last year at Invicta FC 18, didn’t go her way.

Orr suffered a TKO defeat at the hands of Sijara Eubanks. Midway through the first round, Eubanks forced Orr against the cage and then took her down. This was the beginning of the end. The Brazilian Jiu-Jitsu black belt Eubanks finessed her way into a dominant position of side control, trapping Orr’s arm and leaving her vulnerable to a barrage of strikes that forced the referee to stop the fight.

“She was a tough fight,” admitted Orr. “Even after I fought her, people that worked for Invicta were like, ‘Man, we gave you a tough fight and you did good,’ and this and that. And she wasn’t a joke. And I went into that fight knowing that, but I don’t fight tomato cans. I fight to see who’s the best, and that was a challenge for me. And I needed that, and it gave me that much more motivation.

It was a difficult loss, but it was not an unfamiliar scenario for Orr. She lost her amateur debut, too, but then won her next 10 fights.

“It’s changed the way that I’ve trained as well,” said Orr. “So, as much as it sucked and as much as I wanted to win that fight, I learned more from a loss than I could from a win. Everything happens for a reason.”

Those changes came immediately in the form of a move to a new state and an entirely different gym.

“Last September, I actually moved to Simpsonville, South Carolina, and I now train at Upstate Karate, which is headed by Stephen Thompson and his dad, Ray Thompson,” said Orr. “I actually came up here in August of 2015 and I hit it off with Ray. He had been wanting me to move down here and train with him for awhile, and the gym that I was at, I just wasn’t getting what I needed out of it. And I just hit it off so well with Ray and Stephen and all the guys here. I decided to move out here full-time just to solely train at their school.”

It’s essential for a fighter to build a camaraderie with their training partners and coaches. Mixed martial arts is a tough and demanding sport, both physically and mentally. A fighter wants to be able to walk into a gym happy with where they’re at, but also with a level of trust and emotional connection to the people they rely on.

“I love these guys,” Orr said. “They are so humble and willing to help. Mr. T [Ray Thompson] is a business man, don’t get me wrong, but he is also someone I highly look up to outside of the gym and respect. That’s why I decided to move eight hours away from all my family [and] all my friends, just to come train here with them, because they are truly amazing people. I’m already at the point where I’m 100 percent comfortable with them and I have 100 percent faith in them and trust them.”

The comfort, the trust, the camaraderie — these are all key factors for a fighter. However, at the end of the day, a fighter’s skills are going to determine whether they leave the cage with their hand raised. Has the move to South Carolina been able to provide that for Orr? The answer comes on Thursday night. This next fight is key for her future. She needs a win more so than any fighter on the card. An 0-2 start to a pro career can be overcome, but it’s a hole she might end up permanently buried in.

“I’ve definitely jumped up a lot of levels just training around my teammates and being around Mr.T,” said Orr. “He pushes me physically, but he pushes me more mentally. He likes to call it pain and mental anguish. My skills have gotten so much better. It’s been over a year since I fought, and it’s been almost a year since I’ve been solely training out here.

“They train a lot of stand-up here, obviously, Stephen Thompson is a karate fighter, and I do all the classes here. I do the Kenpo karate, the jiu-jitsu, the strength and conditioning. I actually just started working a few weeks ago with Stephen Thompson’s strength-and-conditioning coach, so that’s definitely helped me step up my game as well. I feel my stand-up has improved. [I’m] also working with Anna Crutchfield, who’s been the IKF world champion for three or four years in a row now.”

Orr hopes the changes will make a world of difference. She seems sure they will. However, she won’t know for certain until Thursday when she is standing across the cage from her opponent. The journey is a tough one, but one that every fighter has to take.

“I have no family out here,” said Orr. “I have no friends outside of the gym here. But that’s the sacrifice I chose to make.

“It’s the sacrifice I know will pay off, and I’m doing everything I know I can do in my willpower to make sure that it does. I moved out here to excel in my career and make it to the top and be in the UFC and be a champion.”

It’s just a few days before her fight, and the excitement is building again for Orr. There won’t be a letdown this time, she hopes. It’s time for Orr to move in the right direction. No more disappointment, just victory.