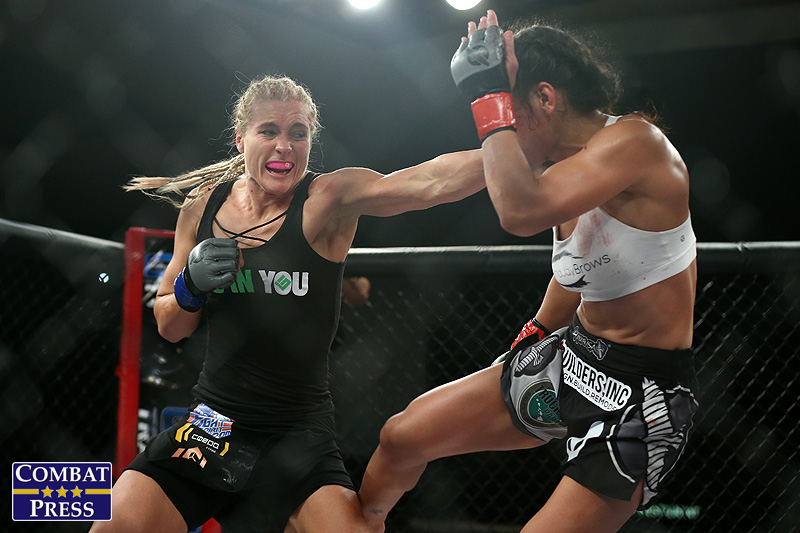 The Weekend in Scraps: UFC Rotterdam, Invicta FC Crowns a Champion, Askren Reigns at ONE

The UFC’s return to Holland featured a towering main event between heavyweights Alexander Volkov and Stefan Struve. Struve did damage early with numerous knees, but it was the consistent attack of the former Bellator MMA and M-1 champion Volkov that was the story of the fight. He attacked with combinations and as the fight wore on, Struve couldn’t keep up. In a division that is badly in need of fresh contenders, Volkov could very well be on the cusp of a title shot. Furthermore, it’s hard to believe this is the same man who suffered decision losses to Tony Johnson Jr. and Cheick Kongo under the Bellator banner.

Speaking of the main event, some criticism is due for referee Marc Goddard. Usually one of the sport’s best, Goddard had a terrible outing during the Volkov/Struve bout. Despite the new emphasis on penalizing fighters for fighting with an open hand, Goddard repeatedly allowed Struve to do so, resulting in two very obvious eye pokes. Even under the old rules, Struve deserved a point deduction, but it looks even more ridiculous under the new rules. Being the third person in the cage is no easy task, but blatant mistakes like Goddard’s performance need to be pointed out to prevent them in the future.

Invicta Fighting Championships hosted its 25th event on Thursday. The all-women’s promotion debuted at the Tachi Palace Hotel and Casino in Lemoore, Calif., and delivered its usual action-packed event.

In the night’s headliner, Russia’s Yana Kunitskaya dominated Raquel Pa’aluhi for five rounds to become the bantamweight champion. Brazilian Livia Renata Souza once again made a case for the strawweight top 10 by handing her countrywoman Janaisa Morandin her first defeat.

The rest of the event was largely a showcase for international fighters and future contenders. Germany’s Katharina Lehner, Wisconsin’s Kali Robbins, California’s Yaya Rincon and Colorado’s Cheri Muraski all picked up wins to remain undefeated. You can check out photos of all the action right here on Combat Press.

One tidbit that fans may not have noticed from Invicta FC 25 was the return of referee Josh Rosenthal to a major promotion. Largely regarded as one of the sport’s best, the Californian endured legal issues and has been away from the sport for roughly five years. Based on his clear command of the cage on Thursday night, it does not look like Rosenthal has missed a beat.

ONE Championship was also in action this weekend with a visit to Shanghai, China, for its 60th card. The majority of the card was a showcase for local talent, but the main event did feature the promotion’s undefeated welterweight (err, middleweight?) champion, Ben Askren. Askren dominated an overmatched Zebaztian Kadestam to earn a second-round TKO and retain his title.

The 21st event from Legacy Fighting Alliance went down in Branson, Mo., on Friday night. Ignoring the despicable past of the night’s headliner, the event delivered some solid action, with the top three fights ending in the first round.

Antonio Margarito continued his comeback against the tough journeyman Carson Jones. Jones has pulled off a few noteworthy upsets in the past, and he came close to defeating Margarito in Mexico as well. The fight was about even after seven rounds when the referee decided to call a halt to the bout due to a cut on Margarito’s right eye. This caused a controversy. The cut was believed to have been opened by a punch from Jones, but the Mexican referee ruled that it had been opened by a headbutt. After the bout was halted, they went to the scorecards where Margarito was awarded a unanimous technical decision. It seemed like a bit of home cooking was at play in Margarito’s favor in this one, but he keeps his winning streak going as he searches for a third bout with Miguel Cotto.

The world’s best pound-for-pound kickboxer, Sitthichai Sitsongpeenong, continued his reign of dominance on Saturday in Xian, China. The current Glory lightweight champion made it look easy against 2014 K-1 MAX World GP champ Enriko Kehl. The decision victory moved Sitthichai into the finals of the Wu Lin Feng Yi Long Challenge tournament opposite current K-1 World GP titleholder Chingiz Allazov. The tourney final takes place in October and serves as a rematch of the pair’s 2014 bout in which Sitthichai pulled out the victory in the extension round. The winner will meet popular Chinese fighter Yi Long for a cash prize of 1 million RMB (approximately $146,000).