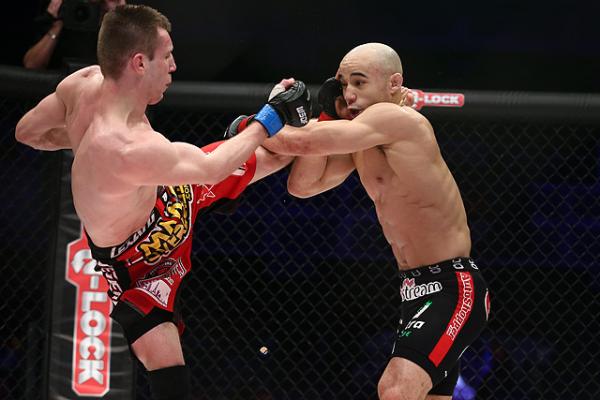 Visualize an accountant. What do you see? Nerdy glasses? Pocket protector? A very well-balanced sack lunch? How about a man driving a four-cylinder grocery-getter?

If the answer to all of the above is yes, that is the basic stereotype of a number-crunching, pencil pusher. But, how many people know a CPA who is 16-4 when locked inside a cage fighting against game opponents?

If you don’t know who Josh Rettinghouse is, just be nice to your accountant. Even if he is a small sampling of the CPA population, it’s good to be nice to a guy who can, and has, kicked some serious ass.

Rettinghouse started a career in wrestling in high school, and he was damn good. However, things didn’t pan out the way he expected. He didn’t get to wrestle in college, but he still pursued a higher education in two areas, and both panned out pretty well.

“I had a friend from the wrestling team invite me to his gym, and I just kind of fell in love with MMA, you know?” Rettinghouse told Combat Press. “He’s kind of been my main training partner ever since. So, I was in college, but I wasn’t wrestling at the time, so it was kind of my college athletic experience. That’s how I thought of it. I graduated and took a job, and now I kind of do both at the same time.”

Rettinghouse was on a path to a big future for the early part of his MMA career, and he was at the top of his division in the World Series of Fighting, before he face the dominant Marlon Moraes five years ago. But, he was still working for his accounting firm at the same time. He eventually came to a crossroad.

“When I fought Moraes back in 2014, I was a senior in college, and I was kind of like on this fence or whatever,” Rettinghouse said. “I was like ‘if I beat Moraes and win this belt, maybe I’ll give up my other career and focus on fighting.’ I lost, and then I did that, and decided to continue both. That’s basically what I’ve been doing since. I work full-time right now. Fortunately, they’re really cool with giving me time off, and I can kind of dictate my schedule too. I can train. It’s a lot to juggle, but, ultimately, I’m going to continue this until I retire. Unless the UFC calls, and then I’ll maybe go part-time. After the World Series, Jason [Ellis] got me the contract with M-1 and I went on a little win streak with them, and unfortunately got injured. I’ve been out for almost two years now. I finally was healthy – almost a year ago now – but I needed to get back in shape. I wanted to fight earlier this year, but it just didn’t pan out.”

Rettinghouse came back after Achilles’ tendon and bicep surgeries, but prior to that, he was the king of the M-1 Challenge bantamweight division, on pace for a title fight. After two years on the bench, he came back, and a guy he had previously beaten, Sergey Morozov, was fighting for a title.

After the former bantamweight M-1 champ moved up, the belt became vacant and Rettinghouse knew he should be in line for a shot. However, the promotion gave it to Morozov. Morozov won and now Rettinghouse gets his chance to capture the belt at M-1 Challenge 105 tomorrow.

“But, in July, they were linking him up against another guy, but I didn’t understand why. He won the vacant belt, and they offered me a fight against somebody else. I was under the impression that, if I won that fight, I would fight him. But, that fight got cancelled, and I started pushing my manager to just push for the championship. I didn’t feel like I needed to prove myself to get that fight. I’m already 4-0 in the division, and had already beaten this guy, so there was no reason not to fight him.”

Regardless of the past, Rettinghouse finally gets the chance to win the belt from a guy he has already beaten once. He feels like he has a good understanding of his opponent.

“Stylistically, we’re both pretty well-rounded,” Rettinghouse assessed. “I think I’m just a little bit better everywhere – better striking, better jiu-jitsu, better everywhere. We match up pretty well, but I think I just have the advantage everywhere the fight goes. I’m just looking to capitalize all of the situations.

“At this point, I’m 29. I thought I was going to be in the UFC at 25 or 26, and, obviously, that didn’t happen. I’m kind of just having fun with it, and make the most out of the last couple years I have. Basically, I’ve just determined that everything is dependent on my health – number one – and, number two, I’m just having fun with it. At this point, it’s a fight-by-fight basis.”

Josh Rettinghouse is a project-based CPA who started out with fighting as his top priority. However, life’s cards fell the way they did, and he is now fighting for the M-1 title, and he still has a backup plan. Either way, he will likely be fine in life, but tomorrow poses a huge opportunity to jump into the spotlight to chase his dream.

“Originally, I wanted to just fight and drop out. But I’ve always had good people in my corner to tell me that I always need a plan B. My plan B kind of became my plan A, and, fortunately, I can do both. If I could go back and change it, I would do both.”