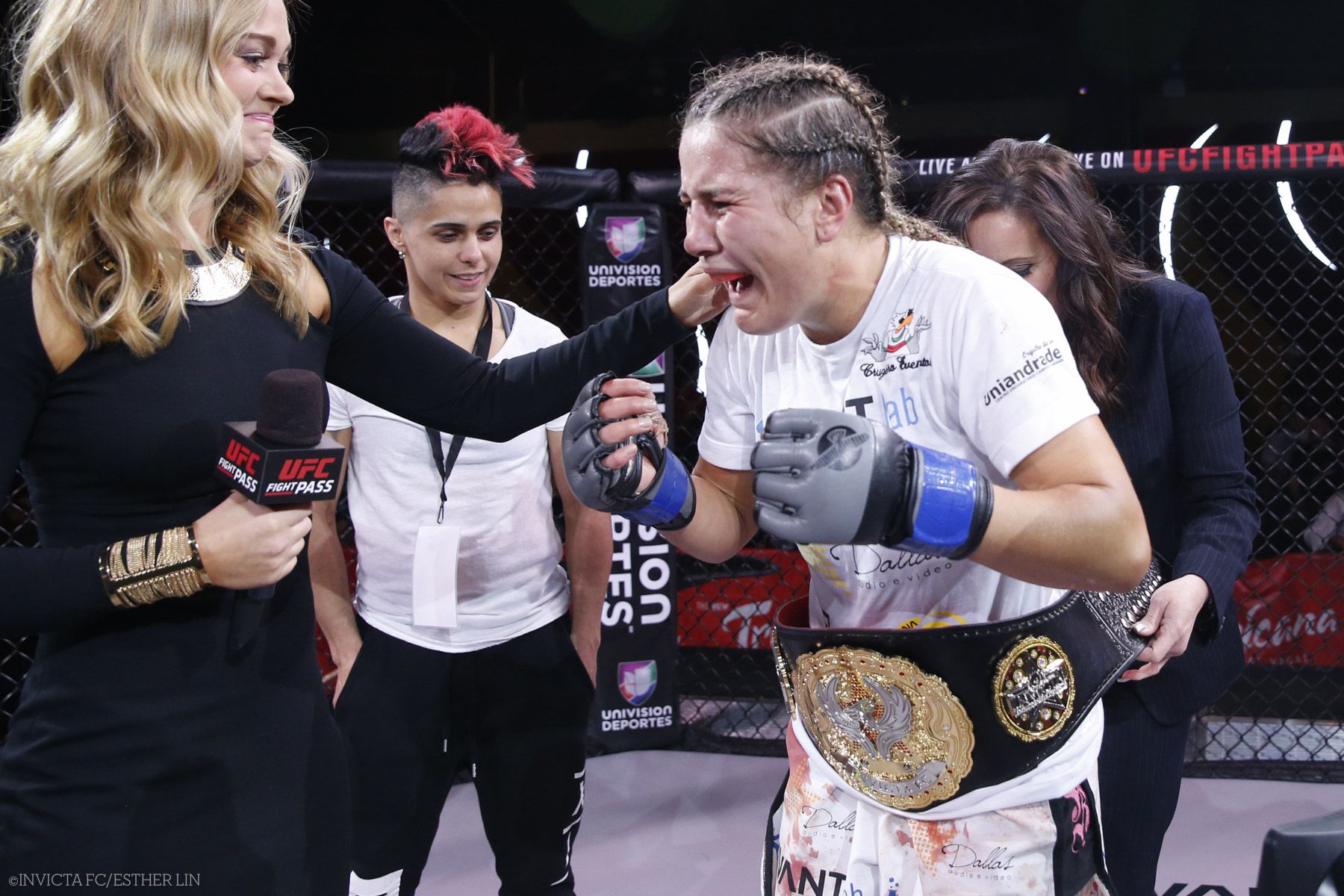 Invicta FC 16: What’s Next For the Winners?

The 16th Invicta FC card came and went, but not without another entertaining night of fights. Two titles were at stake, and both contests delivered the type of fights that makes MMA so darn fun to watch. Nine fighters left the cage victorious, and now it’s time for matchmaker Julie Kedzie to find them suitable opponents. Here are the match-ups that would make sense for the winners.

Amber Brown gave atomweight champion Ayaka Hamasaki her toughest test since 2013, the year when Hamasaki suffered her first and only loss against current UFC strawweight title challenger Claudia Gadelha. After three rounds of magnificent grappling exchanges, Hamasaki submitted Brown by armbar. Hamasaki remains a marked woman with gold around her waist. The fighter who should get the next title shot also happened to compete on the Invicta FC 16 card. Jinh Yu Frey bested former champ Herica Tiburcio by playing to her strengths in the stand-up. Frey kept the fight standing and outpointed Tiburcio, even dropping her at the end of one round. The victory for Frey was her third straight, continuing her momentum all while catching the attention of MMA fans. There’s certainly a buzz around Frey at the moment. People get excited when they hear she is fighting. Invicta FC would be wise to seize on this and book Hamasaki vs. Frey for later in 2016.

Jennifer Maia won interim flyweight gold when she defeated Vanessa Porto in the clear “Fight of the Night.” The bout comfortably put itself among the top title fights Invicta FC has put on. Maia showed off a well-rounded game and the grit and determination of a champion. She will need to have all of those qualities when she meets Barb Honchak, the current flyweight champion. The pair should meet to unify the flyweight championship. Honchak took a hiatus from the sport, which resulted in the interim title fight between Maia and Porto. She will be back, however, and the fans should be treated to a title-unification fight.

After a layoff due to injury, Irene Aldana returned and showed why she is a promising prospect in the bantamweight division. She decimated Jessamyn Duke within one round. Aldana made it clear in her post-fight interviews that she wants a shot at the title. That won’t happen next, since current titleholder Tonya Evinger is facing off against Colleen Schneider in May. However, there’s another former challenger who is also ready to come back to Invicta and prove her last fight was a fluke. That fighter is Pannie Kianzad. Kianzad has been training extensively and recently traveled to Thailand to improve her game. She wants to fight, and Aldana is the perfect match-up.

The resurgence of Roxanne Modafferi’s career continues. She has now won two straight and four of five under the Invicta banner. Modafferi, like Aldana, made it clear she wants a title shot. That doesn’t appear likely next, though. However, a No. 1 contender’s fight does seem so. Her opponent for such a fight also happened to fight at Invicta FC 16. Sarah D’Alelio defeated Andrea Lee to earn her first victory in Invicta since Invicta FC 4, where she defeated current UFC bantamweight contender Amanda Nunes. “The Monster” looked impressive enough to warrant an argument for her as a title challenger. A fight between D’Alelio and Modafferi would also be a match-up between two seasoned veterans who have been around the sport for a very long time.

Angela Hill has proven to be one of Invicta’s best signings in some time. In her two fights, she’s brought violence and finished both of her opponents, Alida Gray and Stephanie Eggink. However, none of her opponents have had the skill set to threaten Hill where she is perceived to be most vulnerable: in the grappling department. Sharon Jacobson would be a tough match-up for Hill. Jacobson is well rounded and a phenomenal wrestler, but it’d be a fight to see just how far Hill has progressed in her career. This bout could also end up being a No. 1 contender’s fight in the strawweight division.

Aspen Ladd has remained undefeated in her young career. She is 3-0, all her wins came in Invicta, and she has finished all of her opponents. The fight against Kelly McGill was her first contest at bantamweight, and the decision to move up a weight class seemed to pay off. Her cardio looked great during the entire fight. Laura Howarth seems like a logical choice to be Ladd’s next opponent. Howarth signed with Invicta following the closure of Cage Warriors Fighting Championship. She has feverishly been campaigning for a fight. So why not oblige the “Hot Head” from England with a fight against Ladd?

After an extensive amateur career that spanned over 10 fights, Ashley Greenway finally made her pro debut, defeating Sarah Click by decision. It was an entertaining fight to open the card. We’ve yet to see Germany judo specialist Daniela Kortmann make her Invicta debut. This would be the fight to make, pairing Kortmann with Greenway. Both ladies are so young in their careers and it’s an intriguing stylistic match-up.