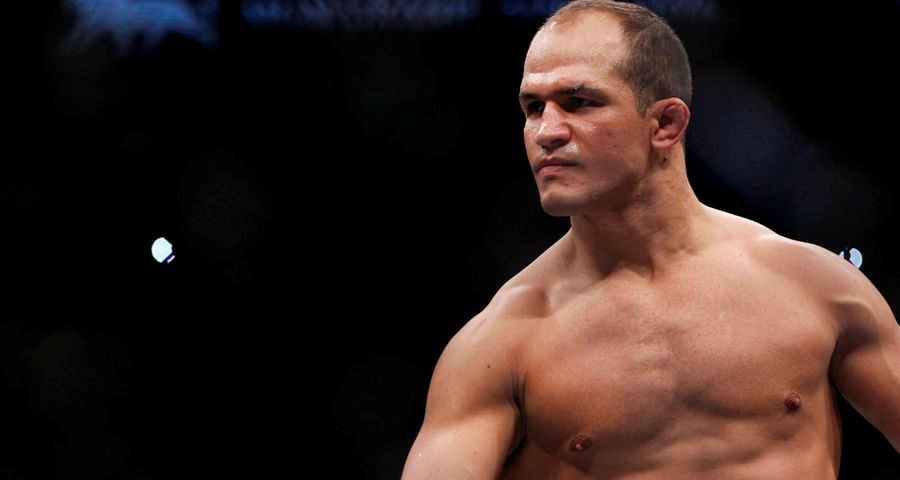 Former heavyweight champion Junior dos Santos outlasted Stipe Miocic in an epic five-round war. Miocic scored early with his hands, beating dos Santos to the punch and mixing in takedown attempts. Miocic landed the fight’s first takedown in the second stanza, but he failed to keep the Brazilian down long. The pace began to slow in round three, but dos Santos came on strong. He dropped Miocic with a left hook, but was unable to finish. In round four, it was dos Santos that earned a surprising takedown, but Miocic worked back to his feet. The last frame was a war of attrition, but the late volume of dos Santos was the difference, as he earned the decision victory.

Brazilian lightweight Rafael dos Anjos put on the most dominant display of his career, battering former title challenger Nate Diaz for three rounds. Dos Anjos set the tone of the fight with brutal leg kicks. Diaz was forced to switch his stance less than half way through the opening round. Dos Anjos earned a takedown and scored with big shots from the top. Round two was even more one-sided as the leg kicks continued to land and an elbow from dos Anjos opened a cut over the right eye of Diaz. Diaz never quit, but dos Anjos again took the fight to the ground in the final round. All three judges gave the fight to dos Anjos, including two 10-8 scorecards.

Former Strikeforce champion Alistair Overeem gave fellow Dutchman Stefan Struve a rude welcome back to the UFC, scoring a first-round knockout over the towering heavyweight. Overeem struggled to find his range against the 6-foot-11 fighter, but closed the distance and earned a takedown. He scored with ground and pound, but Struve kicked him off multiple time. Overeem maintained top position and late in the round delivered a right hand that stunned Struve. After a few follow-up punches, Struve was out cold.

Heavyweight Matt Mitrione kicked off the main card with a violent finish of former title challenger Gabriel Gonzaga. The pair traded shots on the feet until Mitrione landed a short right and followed with a massive left hand that buckled the Brazilian. Gonzaga tried to cover up, but Mitrione delivered a steady stream of punches to earn the TKO victory.

Poland’s Joanna Jedrzejczyk handed Brazilian Claudia Gadelha the first loss of her career in a hard-fought split decision win. Gadelha dominated the first four minutes of the fight with her takedowns and an arm-triangle attempt, but Jedrzejczyk escaped and returned to her feet. She dropped Gadelha with an uppercut in the waning seconds, but the bell sounded to end the round. Gadelha again scored with takedowns in the second round, but Jedrzejczyk continued to land on the feet. The final round was clearly the Brazilian’s, but two of the judges gave Jedrzejczyk the win on the scorecards.

Former flyweight title challenger John Moraga survived a bizarre first-round exchange and stopped newcomer Willie Gates in the third round by rear-naked choke. Gates connected with the groin of Moraga in round one, but inexplicably, referee Jason Herzog missed it and refused to pause the action. Gates punches Moraga from behind, dropping him and taking his back. Moraga survived and pushed the action against the cage in rounds two and three. Late in the final frame, Moraga earned a trip takedown and rained heavy shots from the top. Gates gave up his back and Moraga ended the fight with a choke.

Welterweight Ben Saunders earned his second straight UFC win after veteran Joe Riggs submitted due to injury. Riggs scored a big takedown less than a minute into the fight, but injured himself in the process and immediately tapped.

Drew Dober scored a big upset, submitting former WEC champion Jamie Varner in just over a minute. The pair looked to find their striking range, but Varner closed the distance in the center of the cage. Varner looked to get Dober to the ground with double overhooks, but landed hard on his head. Dober quickly moved to the mount and then took Varner’s back. He applied the fight-ending rear-naked choke and coerced the tap from Varner.

In his promotional debut, lightweight Bryan Barberena handed Joe Ellenberger the second loss of his career with a third-round TKO. Ellenberger scored early with his wrestling, as Barberena started slowly. Barberena increased his output in round two, forcing Ellenberger to retreat. In the final stanza, Barberena connected with a big combination to send Ellenberger to the canvas. He followed up with punches and elbows from the top, prompting referee Herb Dean to halt the bout.

Lightweight David Michaud used a high pressure attack and well-timed takedowns to best Garett Whiteley by unanimous decision. Michaud came forward throughout the opening stanza, forcing Whiteley to counter. In round two, Whiteley landed a big elbow from his back, opening up a huge cut on Michaud. Michaud continued to secure takedowns in the final round, earning the nod from the judges.

Olympic wrestling gold medalist Henry Cejudo had a successful UFC debut, dominating fellow bantamweight Dustin Kimura en route to a unanimous decision win. Cejudo used his vastly improved striking game to batter Kimura from the opening bell. A right hand dropped Kimura in the first round, but he was able to survive. Cejudo made little effort to bring the fight to the ground, cruising to the win on the feet.

England’s Ian Entwistle earned his first Octagon victory, submitting newcomer Anthony Birchak with a first-round heel hook. Birchak closed the distance and earned a takedown, but Entwistle quickly attacked his leg. Birchak desperately tried to roll out of the leg lock, but was forced to tap just 64 seconds into the fight.