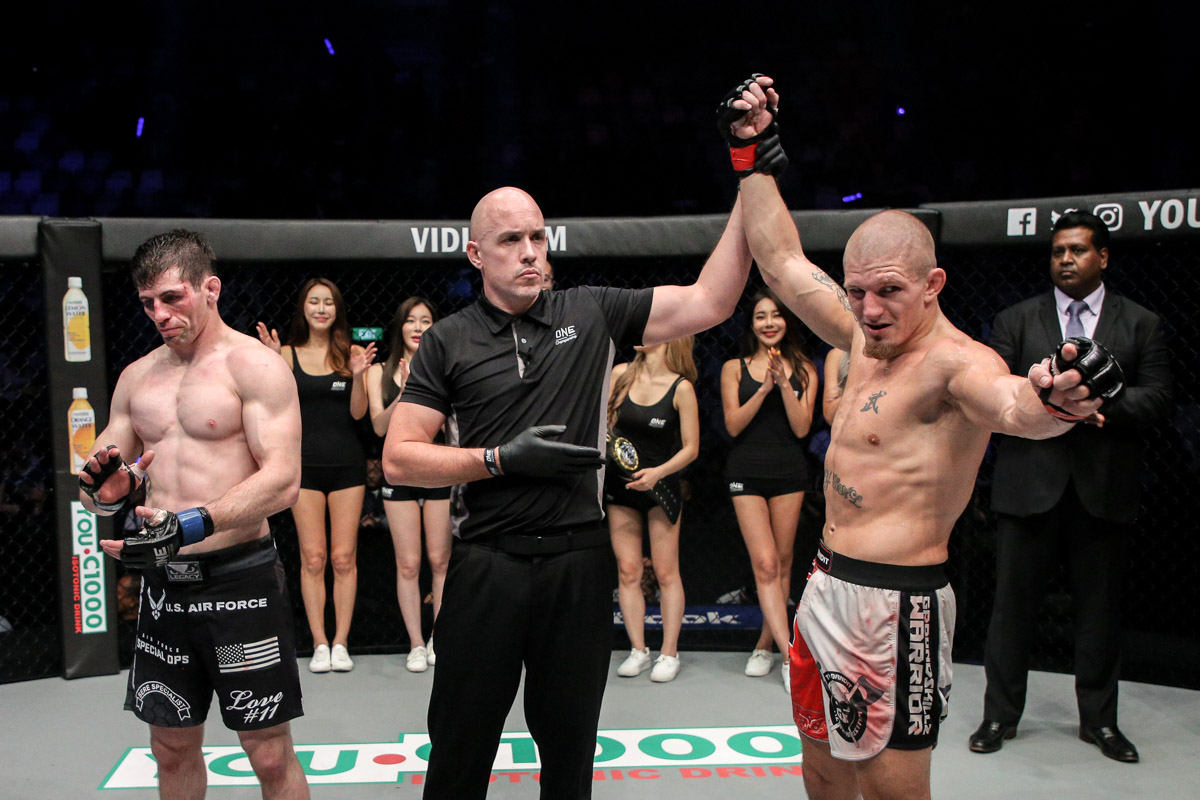 ONE Championship: Reign of Valor Preview and Predictions

ONE welterweight champion Zebaztian Kadestam makes the first defense of his belt against former Fight Nights Global welterweight titleholder Georgiy Kichigin. Kadestam scored a last-minute knockout against Tyler McGuire in the fifth and final round of their fight to win the vacant title. Kazakhstan’s Kichigin has won 14 consecutive bouts, including 12 finishes, dating back to 2014.

In the night’s co-headliner, Myanmar’s Phoe Thaw looks to return to the win column after enduring his first pro loss in late 2018 against Keanu Subba. The 34-year-old takes on Singapore’s Yohan Mulia Legowo, who has lost seven of his last nine contests.

This card is much heavier on its MMA offering than recent ONE events. Does this make it a weaker card overall?

The fact that the card is heavier on MMA doesn’t necessarily mean the talent level is lower. However, there are a few reasons why this event seems like the weakest offering from the promotion so far in 2019.

First of all, the country’s biggest star and two-division champion, Aung La N Sang, won’t be headlining the card. Instead, he is set to defend his middleweight title against Ken Hasegawa in Japan later this month. The upcoming bout will be the first time he hasn’t fought on a card in Myanmar since 2015, and it will be his first fight outside of the country since his loss to Vitaly Bigdash in January 2017. There are other stars from the country on the fight card, but names like Phoe Thaw, Tial Thang and Bozhena Antoniyar don’t hold the same weight as La N Sang.

The promotion has held four major events so far this year, with four more scheduled in the next three months. Following this event, ONE will hold the biggest show in the promotion’s history when it makes its first trip to Japan for ONE Championship: A New Era. That show features four title fights, including a champion-vs.-champion bout between Angela Lee and Jingnan Xiong. With the lack of available title fights, the promotion lacked the resources to stack this event.

However, there are a number of solid competitors here, including former ONE strawweight champion Yoshitaka Naito, former Cage Warriors champ Toni Tauru and K-1 World MAX winner Enriko Kehl, plus a few others. Ultimately, the promotion can put on deeper cards when it mixes in Muay Thai and kickboxing fights. The roster continues to grow as the company further expands its reach into different combat sports.

The headliner is a welterweight title clash between Zebaztian Kadestam and Georgiy Kichigin that coincidentally comes one week after former ONE kingpin Ben Askren made his UFC debut. Kadestam, who has suffered a knockout loss to Askren, is the champion. Kichigin, meanwhile, makes his ONE debut after a long stay in the Russian circuit. Will either of these men prove to be a worthy successor to Askren?

Askren remained undefeated following a controversial finish of Robbie Lawler at UFC 235. Prior to his UFC debut, Askren spent nearly four years with ONE after signing with the promotion in 2014. He was victorious in six of his seven bouts during his run, with his only blemish coming in a no-contest against Luis “Sapo” Santos. Askren won the ONE welterweight title in his second promotional bout over the inaugural champion Nobutatsu Suzuki. He defended his title three times, and he retired as an undefeated fighter before he was surprisingly “traded” to the UFC in 2018.

The current titleholder, Kadestam, lost to Askren in a largely one-sided affair in 2017. The performance left plenty to be desired from the Swedish challenger. Kadestam took the loss in stride and has since knocked out two opponents, Agilan Thani and Tyler McGuire. The 28-year-old, who shocked many when he scored a massive third-round knockout of the aforementioned Sapo in his promotional debut, is a former PXC welterweight champion. He has used his striking chops to take out UFC veteran Ronald Jhun, Ross Ebanez and Glenn Sparv.

Kichigin enters this bout on a long winning streak and with plenty of momentum. The former FNG welterweight titleholder has finished 12 of his 14 opponents during his unbeaten run that stretches back to 2014. Overall, the submission ace has stopped his opponent in 18 of his 20 pro wins, including in his most recent bout against former UFCer Rousimar Palhares. Kichigan scored a first-round knockout over the former top-10 middleweight.

This match will come down to where the fight takes place. Kichigan will test Kadestam’s takedown defense, just like Askren and Sapo did before him. The difference won’t be the experience of Kichigan. Instead, Kadestam’s ability to fight through adversity in his bouts will be a deciding factor in this contest. The Swede will put together three wins in a row for the first time in nearly four years.

Muay Thai bouts are absent from this show, but kickboxing is featured in two main-card affairs and three preliminary bouts. What are the key match-ups among these five fights?

In the featherweight division, which is one of the deepest divisions worldwide, former two-division Lumpinee stadium champion Petchmorakot Petchyindee Academy makes his return to the promotion following a successful debut against Fabrice Fairtex Delannon. In his last bout, the 25-year-old knocked out experienced veteran Liam Harrison with an elbow. Petchmorakot welcomes former Krush 70-kilogram champion Kenta Yamada.

In the flyweight division, former NJKF and WBC Japan Muay Thai champion Kohei “Momotaro” Kodera makes his promotional debut against Australia’s Kenny Tse, who was knocked out by Petchdam Petchyindee Academy in his debut. Kodera, 28, defeated Kazuki Koyano at Pancrase REBELS Ring 1 in February. If Momotaro can put on an impressive debut, look for him to face the top tier in the division.

Decorated Japanese champion Yuta Watanabe enters the circular cage for the first time against Portugal’s Rui Botelho, who fell short in his ONE bouts against Yukinori Ogasawara and Panpayak Jitmuangnon. Botelho will likely need to end his losing skid to remain relevant in the talented flyweight division.