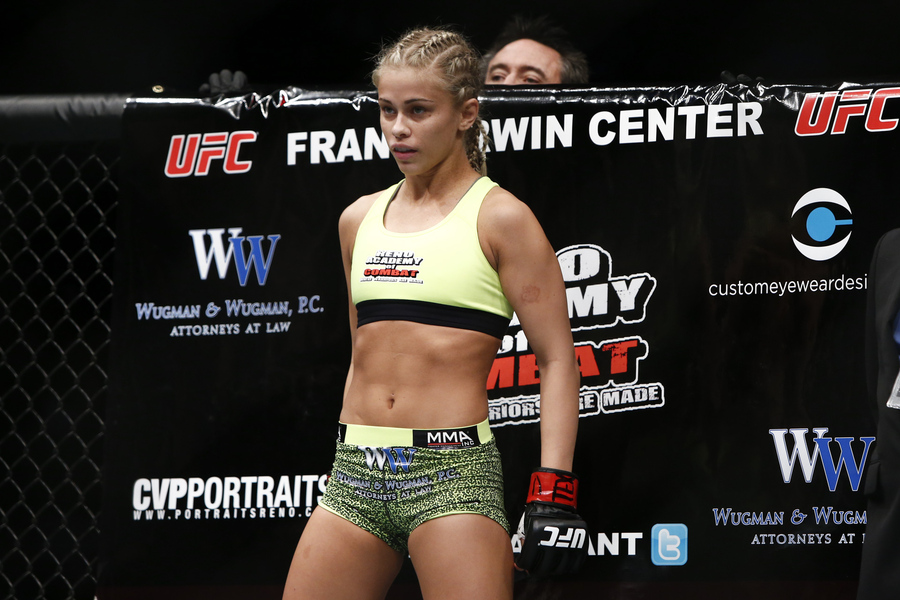 UFC’s Paige VanZant: Proof That Age is Only a Number

The Ultimate Fighter 20 will crown the first-ever UFC women’s strawweight champion. If you were looking for the future face of that division, though, look no further than last weekend’s UFC Fight Night 57, where Paige VanZant certainly stepped up to the plate.

It was a tenacious victory for VanZant. The 20-year-old took it to opponent Kailin Curran early and often. VanZant displayed an aggressive, fan-friendly style that made her UFC debut all the more appealing.

People wanted to point to VanZant’s looks as the reason she was in the UFC. She got destroyed by Torres, they’d say. Then they’d ask why she’s even in the Octagon. Her debut silenced those critics.

It was a dominant performance that showcased just how far VanZant had come since her loss to Tecia Torres in 2013. Curran looked out of place in the fight against VanZant. It was certainly an emphatic win for the young rising star, who became the first strawweight in UFC history to earn a finish.

It only takes a closer look at the victory to see just how dominant of a performance it was. VanZant had incredible flexibility that allowed her to get out of bad positions. She pushed the pace over the course of almost three full rounds. VanZant bullied Curran. Just when you thought Curran could get an advantage from the top, VanZant was able to get out or threaten with a submission attempt. Curran was saved by the bell at the end of the first frame after letting VanZant unleash some ground-and-pound from the top. Rounds two and three were more of the same. VanZant was never content to let Curran get in any offense, and she brutalized the Hawaiian fighter at every turn. The finish came in the third round when VanZant scored a takedown and proceeded to deliver a flurry of punches that Curran couldn’t withstand.

The 115-pound division is certainly going to open some eyes in the coming months. The TUF 20 Finale is filled with fights for the incoming division, and the influx of talent from the show includes many of the best fighters in the division. The championship tournament has certainly drawn eyeballs back to the reality series, but the season will soon end and the division will need to build upon that momentum and not let its foot off the accelerator.

The UFC can not end up with another flyweight division on its hands. The flyweights, despite their talent, receive little to no attention while still putting on great fights. The strawweights will already start off with the stigma that they are women and can’t possibly be as good as the men, but that could not be further from the truth.

VanZant proved that on Saturday. In the end, she and Curran captured “Fight of the Night” honors. The other 11 fights—all men—fell short of that distinction. With more fights like that, the division’s drawing power will be even greater.

That isn’t to mention VanZant’s personality, which is really like no other in the UFC. She was bubbly and all smiles when entering the Octagon. From start to finish, she was thoroughly enjoying her UFC debut. And with a dominant performance like that, why wouldn’t she?

VanZant has the special something that could make her a star worthy of a big promotional push from the UFC. She’s a fighter who will wear a smile and enjoy the physical punishment that fighters undergo for the three or five rounds they are in the cage. She is a raw prospect, granted, and still needs some work to be molded into a future UFC superstar. Her aggressive pace might not work so well against somebody with a lot of power. Curran was able to land a few good shots on VanZant when she was on the way in, but someone with more power could make those shots count in a way Curran could not. Furthermore, against a high-level grappler, VanZant might not be able to pull off some of the crazy sweeps and takedowns she pulled off against Curran.

VanZant shouldn’t be thrown to the wolves. She shouldn’t face a top-five strawweight like the aforementioned Torres in her next fight. She should probably stay away from the top 10, at least for her next outing. There’s no need to rush VanZant into those match-ups. There’s plenty of time to reach the top. Everybody wins with building up VanZant. We get more exciting fights. The UFC gets more attention. And VanZant gets the proper road to reaching her potential.

VanZant is only 20 years old, so anything she needs to work on should come along with time. Yet, it’s for that exact reason that she is perfect to build up for the future of the division. VanZant has plenty of time to reach her potential. Plenty of time. But the future sure looks bright.