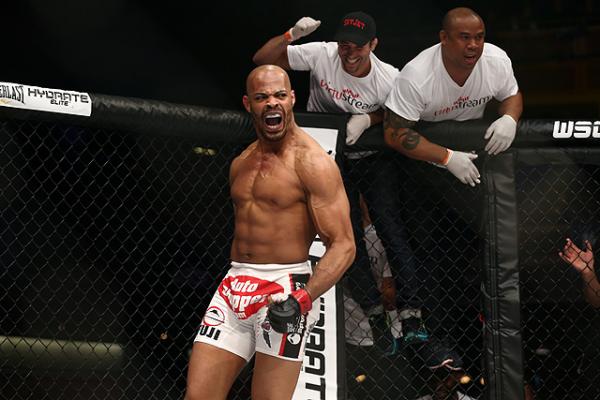 World Series of Fighting 30: Branch vs. Starks Preview and Predictions

When the World Series of Fighting returns to Las Vegas this weekend, the Hard Rock Hotel and Casino will take sole leadership of the title of the most visited venue by the promotion. The Hard Rock also has special significance to the main event. It was at the Hard Rock, one year and nine months ago, that the middleweight belt was inaugurated when current champion David Branch finished Jesse Taylor via D’arce choke. On Saturday, Branch returns to the venue to defend the middleweight crown against Clifford Starks on a card that also includes a showdown for the vacant welterweight crown.

Branch returns to the 185-pound division to defend the first of his two belts, the middleweight championship. He’ll find a game Clifford Starks waiting to knock his head off and leave him with only the light heavyweight belt to defend.

Branch is at his absolute peak. He’s sharp, both above the shoulders and below. His mind and body have come together to turn him into a high-level championship finisher. He’s on a four-fight finish streak. On the feet, he has excellent footwork, good low and high kicks, a crisp jab and a great lead right. The lead right dropped UFC veteran Yushin Okami and was the beginning of the end of his night. On the floor, his Renzo Gracie credentials are always right near the surface. Branch may be the closest Renzo disciple to the original. He has a high-level mixture of hit-to-quit striking, slick jiu-jitsu, the smarts to find the openings and the nastiness to draw the curtains on anyone who stands across from him.

There are a lot of very fitting nicknames in MMA, none more so than “Big Cat” Starks. To watch Starks stalk an opponent in the Decagon is to watch a tiger size up a zebra or a gazelle while preparing to pounce. Starks doesn’t take a step that doesn’t have a purpose. He maintains good balance and accomplishes his ring movement as efficiently as possible. That’s the word with Starks: efficiency. He doesn’t use more energy than necessary in the pursuit of his in-cage goals, which are mostly striking based. He’s got a busy jab hand used to both strike and change his opponent’s eye level. The right hand, meanwhile, stays ready so it doesn’t have to get ready. Starks likes it glued to his ear, locked, cocked and ready to rock anyone who allows the jab hand to expose an opening in their defense.

There’s plenty to like about Starks in this fight. His patience under fire, for one. He can get emotional when brought into a firefight, but he is largely calm in his pursuit of openings. He has a good counter-left hook. It’s short, quick and thrown to drop guys. His openness to working the body is a plus for him as well.

Starks will need everything he has against Branch, one of the most diverse fighters in the world and probably the most diverse fighter in the WSOF. Branch didn’t find both of his championship belts on the ground. Instead, he went out and got them. Branch has paths to victory all over the cage — he can finish off his back, from top position and on the feet. The nod in power certainly goes to Starks, but Branch has enough power to drop fighters and the quickness to finish them.

This fight is a very interesting one. To a casual fan, the Fitch name would probably lead most to believe that he is the favorite and the likely victor. A casual fan who may know Zeferino from the eight-man tournament may think him “coming up” in weight may also be a factor and an advantage for Fitch. However, while the former Purdue Boilermaker may be the favorite, the victory is a much more complex matter than appearances would suggest.

Fitch has a pretty straightforward game plan, but it’s a high-level one. He looks to close the distance, determine the level he wants the fight to occur at, find top position and deliver damage. On his feet, he’s better than he gets credit for. He moves and protects his head well, has a solid jab and some power. No one is going to confuse Fitch for Anthony Pettis, but you can tell the years at American Kickboxing Academy were not wasted.

The eight-man tournament was to be Zeferino’s night. He was unquestionably the sharpest man that evening. Had it not been for a momentary lapse in defense, he might have been fighting for the 155-pound belt last month rather than the welterweight strap on Saturday. He showed on that night who he can be — sharp and fearless on the feet and a shark in the jiu-jitsu waters on the mat — when he is in full bloom. He took a leg from both Brian Foster and Jorge Patino and devoured it. Zeferino, despite his prowess on the feet, is looking to get the fight to the ground, where he has 15 submissions, all in the first round.

One of the more interesting aspects of this fight is that if we were to break the MMA game down to the three main aspects of striking, jiu-jitsu and wrestling, then a case could be made that Zeferino is more talented in two of the three. However, it’s Fitch with the world-class resume.

The fight will most likely come down to pace, like a lot of fights do. The quicker pace favors Zeferino, who can hang with the 55ers. He’s good in the scrambles and throws punches in bunches. Fitch will look to negate all that. He wants to get against the cage or get a takedown and spend the duration of the fight breaking his opponent. This fight will be very interesting if Zeferino decides to fight either from the outside on his feet or gets taken down and can work off his back.

This fight is a huge one for Heun. Much like Timur Valiev’s last fight, this contest seems to exist for the higher-ranked fighter to walk into a title shot. That’s not said to disrespect Heun. It’s just that Magalhães is a high-level guy, and the WSOF has him fighting on the same night that Branch defends his belt, which links them up for a fight down the road. Valiev lost his fight. Magalhães could lose his fight, too, if he is thinking about Branch and not Heun.

Let’s start with Magalhães. If Zeferino is a shark, then Magalhães is a great white. He’s an aggressive submission fighter who is proficient enough on his feet to stay there until he’s ready to go in for the kill. His strikes could be a little cleaner. The jab is good, but he likes right and left hooks that are a little wide. The thing that Magalhães may do as well as anyone is set traps. Everyone knows where the fight is going and yet somehow it always ends up there.

Heun is a young brawler who looks to land big shots. He throws big kicks and fires invisible fastballs disguised as punches. When he connects, it’s big. When he doesn’t, it seems to sap his energy and make him have to work twice as hard. An example of this came in the Clinton Williams fight. Heun looked great early and started to fade late, while Williams just ran out of time. Heun is a good athlete who is willing to take a big risk on a strike to get a big reward.

It bears repeating that this fight looks to be grooved a little for Magalhães. Heun has four losses, and every single one of them came via submission. Starks, who is in the main event, even got him with a head-and-arm choke — and Starks is, in all due respect, light years from Magalhães as a submission fighter.

If Heun wants to have any type of success, then he needs to understand that his real enemy is the ground fight. The important thing to remember is that the ground fight can come at any time. Regardless of how he gets there, Magalhães wants to be on the ground. That must be respected.

In his fight with Matt Hamill, Magalhães was caught with a good uppercut. As his momentum was going to the ground, he just sort of embraced it and attacked “The Hammer’s” leg. That was that. Heun needs to be aware of what is happening and stay on the feet and on the outside. Magalhães has holes in his stand-up, but he just needs to be patient.

Davis might be noticing a trend. He’s the guy the WSOF seems to be throwing in against young prospects. Two of his previous opponents, Abubakar Nurmagomedov and Matthew Frincu, are facing off on the prelims. On this night, Davis gets Azaitar, who is new to the promotion and carries a ton of hype. Why Davis? Well, he’s a game fighter who is proficient on his feet and in his takedowns. He will push the action and let us know what we have in this fighter.

Azaitar comes in as a wrecking ball. He has 11 career wins, including seven by knockout or TKO with six coming in the first round. He only has two losses, one by injury and one by disqualification. He’s a legit prospect who seems to have an “it” factor.

Davis can certainly hang with guys at this level. Nurmagomedov was all over him, but the Frincu fight was a little closer, with one of the judges giving it to him. It will be interesting to see what Davis can expose about Azaitar that the international scene couldn’t.

Nurmagomedov and Frincu are a couple of one-loss prospects who will hook up at 170 pounds. They are fighters with fairly different styles. Frincu is reminiscent of Gegard Mousasi, whereas Nurmagomedov is cut directly from the cloth laid by his older brother, UFC top contender Khabib Nurmagomedov. The hope here for Frincu fans is that he can make Nurmagomedov pay for closing the distance. That keeps the fight interesting. While Frincu has good takedown defense, it’s not enough to keep Nurmagomedov off him without strikes.

Rest of the card

The remainder of the card is comprised mostly of prospects who are looking to put themselves on the map.

The recent news of Gil Guardado’s scrapping was a bit upsetting. He certainly wouldn’t have been the reason anyone tuned in, but he looked good against Giga Chikadze at WSOF 26. There may be something there with him.