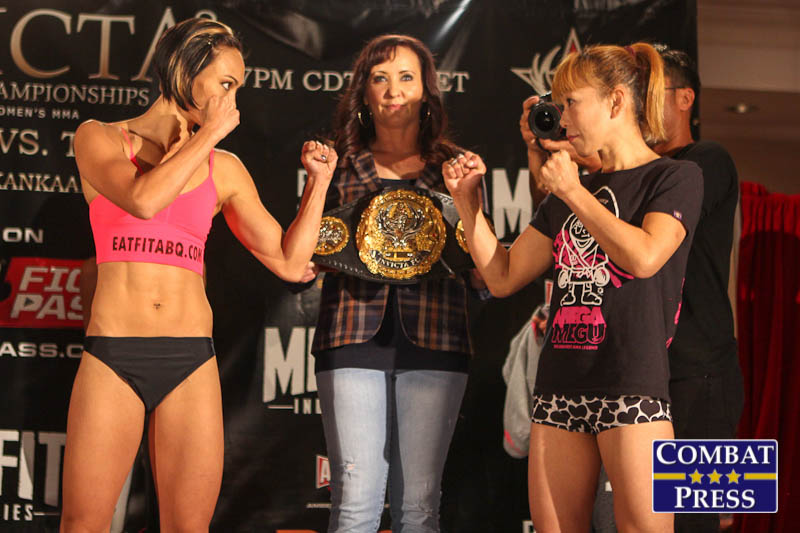 On Saturday, Sept. 6, Invicta Fighting Championships will make its long-awaited return as it hosts its eighth event from the Municipal Auditorium in Kansas City, Mo.

In the night’s main event, atomweight champion Michelle Waterson will make the first defense of her belt as she takes on Japan’s Yasuko Tamada. Waterson, or “The Karate Hottie,” currently rides a five-fight winning streak that dates back to 2010. The 28-year-old captured Invicta gold last April with a fourth-round armbar of Jessica Penne at Invicta FC 5. Tamada, meanwhile, will make her promotional debut. The Megumi Fujii-trained fighter has picked up three straight wins under the Deep/Jewels banner heading into the title affair, which will mark her first bout outside of her native Japan.

The co-main event will also feature Invicta gold on the line as the promotion’s vacant strawweight title will be up for grabs when Invicta vet Katja Kankaanpaa  squares off with newcomer Stephanie Eggink. Finland’s Kankaanpaa was one of the few 115-pound fighters on the Invicta roster that wasn’t brought over to the UFC. “The Killer Bunny” suffered the first and only loss of her career to Joanne Calderwood at Invicta FC 7, but rebounded with a second-round armbar finish of Alyona Rassohyna in May. Eggink will step into the Invicta cage riding a three-fight winning streak. The 26-year-old captured XFC gold in her last fight by submitting veteran Angela Magana with a triangle choke.

The 10-fight event will kick off Saturday at 8 p.m. ET. The entire fight card will stream live on UFC Fight Pass.

Above is a video preview with Invicta matchmaker Julie Kedzie, UFC fighter Shayna Baszler and Rob Tatum of Combat Press.