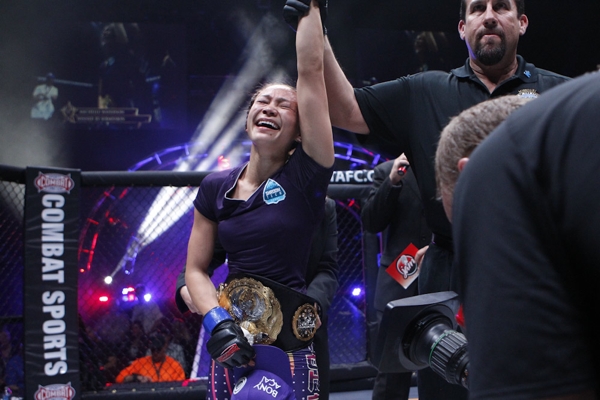 On Saturday, Sept. 6, Invicta Fighting Championships made its long-awaited return as it hosted its eighth event from the Municipal Auditorium in Kansas City, Mo.

In the night’s main event, atomweight champion Michelle Waterson made the first defense of her belt as she took on Japan’s Yasuko Tamada. Waterson, or “The Karate Hottie,” rode a five-fight winning streak that dated back to 2010. The 28-year-old captured Invicta gold last April with a fourth-round armbar of Jessica Penne at Invicta FC 5. Tamada, meanwhile, made her promotional debut. The Megumi Fujii-trained fighter had picked up three straight wins under the Deep/Jewels banner heading into the title affair, which marked her first bout outside of her native Japan.

The co-main event also featured Invicta gold on the line. The promotion’s vacant strawweight title was up for grabs when Invicta vet Katja Kankaanpaa squared off with newcomer Stephanie Eggink. Finland’s Kankaanpaa was one of the few 115-pound fighters on the Invicta roster that wasn’t brought over to the UFC. “The Killer Bunny” suffered the first and only loss of her career to Joanne Calderwood at Invicta FC 7, but rebounded with a second-round armbar finish of Alyona Rassohyna in May. Eggink stepped into the Invicta cage riding a three-fight winning streak. The 26-year-old captured XFC gold in her last fight by submitting veteran Angela Magana with a triangle choke.

Invicta atomweight champion Michelle Waterson retained her 105-pound title by becoming the first to stop Japan’s Yasuko Tamada. Waterson opened with a flurry of kicks to set the tone for the opening round. When Tamada got close, Waterson clinched and fired knee after knee. The champion mixed in flurries of punches with an occasional head kick, but Tamada never went down. It was more of the same in round two as Waterson poured it on with more knees and kicks to the body. Tamada never stopped coming forward, despite the assault. In the third round, Waterson was more patient with her shots. She continued to land knees and Tamada’s face began to swell badly. Late in the round, Waterson delivered a kick to the face of Tamada that wobbled her for the first time along the fence. Waterson followed with punches and referee Greg Franklin stepped in to halt the bout.

Invicta crowned a new strawweight champion as Finland’s Katja Kankaanpaa scored a come-from-behind, fifth-round d’arce choke finish of Stephanie Eggink. In the opening round, Eggink used her jab to keep Kankaanpaa at bay, but the Finnish fighter was able to score a takedown. Eggink quickly attacked with a triangle attempt and swept to the mount. Kankaanpaa showed great submission defense and survived the round. Kankaanpaa’s takedown came much sooner in round two and she was more conservative with her movement to nullify Eggink’s attack off her back. Eggink was able to stand and scored with combinations late in the frame. The third stanza saw Eggink scoring early on the feet and along the cage with knees. Kankaanpaa was able to muscle the fight to the ground, but Eggink again attacked with a triangle choke. Eggink transitioned to an armbar, but Kankaanpaa escaped. Eggink used a leg lock attempt to sweep to the top position, but Kankaanpaa returned the leg lock attempt as the round closed. Kankaanpaa worked hard for a takedown in the fourth round and got it briefly. She then dove for another and Eggink was able to sit down into the mount. She rained heavy shots and Kankaanpaa gave up her back. Eggink pounded away for the remainder of the round, but could not get the finish. Kankaanpaa went for broke in the final round and set up a deep d’arce choke that forced Eggink to tap.

Veteran Tonya Evinger spoiled the bantamweight debut of Brazil’s Ediane Gomes, earning a first-round armbar finish. Evinger came out firing with her jab, but Gomes secured a body lock along the fence. Gomes looked to bring the fight to the ground, but Evinger reversed the position and ended up on top. Gomes attacked with a heel hook, prompting Evinger to look for a toe hold. The pair worked back to their feet, but Evinger again brought the fight to the ground. Gomes looked for an armbar and then a guillotine choke, but Evinger moved to mount. From the dominant position, Evinger locked up the fight-ending armbar.

Two of the sport’s pioneers closed out their trilogy as Roxanne Modafferi used a vastly improved striking attack to best Tara LaRosa via unanimous decision. Modafferi put her footwork and head movement to work from the opening bell, keeping LaRosa guessing on the feet. LaRosa swung with wild power shots, but failed to connect. Modafferi increased her output in round two as LaRosa’s pace slowed down. Modafferi landed numerous kicks to the body and clean, one-two combinations. In the final round, Modafferi dropped LaRosa with a beautiful shot down the middle, but coaxed her back to the feet for more punishment. When it was all said and done, Modafferi walked away with clear-cut victory.

Flyweight DeAnna Bennett made opponent Michelle Ould pay for missing weight, scoring a violent, second-round TKO via liver shot. Bennett pushed the action early, forcing Ould against the cage. The pair jostled for position with Bennett scoring with knees. Midway through the round, Bennett caught an Ould kick and brought the fight to the ground briefly. Late in the round, Bennett again scored with knees. In round two, Bennett continued her advance, landing a liver kick and punches that saw Ould buckle along the cage.

In the first lightweight bout in Invicta history, Canada’s Charmaine Tweet used her experience and superior technique to get the better of her younger foe, Veronica Rothenhausler. The power-punching Rothenhausler was swinging for the fences early, but Tweet countered well with her jab. Tweet was able to back Rotherhausler against the cage and briefly looked for a standing rear-naked choke, but abandoned it. Tweet caught a kick from Rothenhausler and brought the fight to the mat. She quickly moved to the mount and then took Rothenhausler’s back. She flattened out Rothenhausler and rained punches. When Rothenhausler rolled to her back, Tweet finished her with punches from the top.

Bantamweight Irene Aldana made quick work of UFC veteran Peggy Morgan, scoring a first-round, rear-naked choke finish. Mexico’s Aldana dropped Morgan early with a big shot and flurried for a finish along the fence. Morgan was able to recover and get back to her feet, but it wasn’t long before Aldana delivered another heavy right hand that crumpled Morgan. Aldana moved to mount and rained punches, forcing Morgan to give up her back. The Mexican fighter quickly attacked Morgan’s neck to coerce the tap.

Mexico’s Alexa Grasso kept her unbeaten record intact with a unanimous decision over fellow strawweight Ashley Cummins. Cummins started the fight strong, peppering Grasso with punches and scoring with a big takedown. But once the fight hit the mat, Grasso latched onto a deep armbar attempt and delivered punches from her back. Cummins survived the round, but her pace slowed in round two. Both fighters scored with combinations in round two, but Cummins was unable to bring the fight to the mat. Grasso opened up with her hands in the last round, helping her claim the decision win.

Atomweight Jodie Esquibel started slow, but finished strong, edging out newcomer Jinh Yu Frey by split decision. Frey rocked Esquibel badly in the opening frame with a left kick. She quickly took Esquibel’s back and looked for a rear-naked choke, but Esquibel escaped and finished the round on top. The second stanza was very close as both fighters struggled to find their range. Esquibel went for broke in the final frame, battering Frey with combinations and bloodying her face. The late effort was enough to convince two of the judges to hand Esquibel the win.

Colorado strawweight J.J. Aldrich impressed in her professional debut, dominating Florida’s Delaney Owen on her way to a unanimous decision. Aldrich was the aggressor early, prompting Owen to look for a takedown. Aldrich showcased excellent takedown defense to keep the fight standing and peppered Owen with knees. Owen did score with a nice hip toss in round two, but Aldrich transitioned to her back and threatened with a rear-naked choke. Owen survived the round, but her pace slowed in the final frame, allowing Aldrich to score a takedown. Aldrich rained punches and elbows from the top as Owen desperately looked for a heel hook late, and the judges rewarded Aldrich for her efforts.