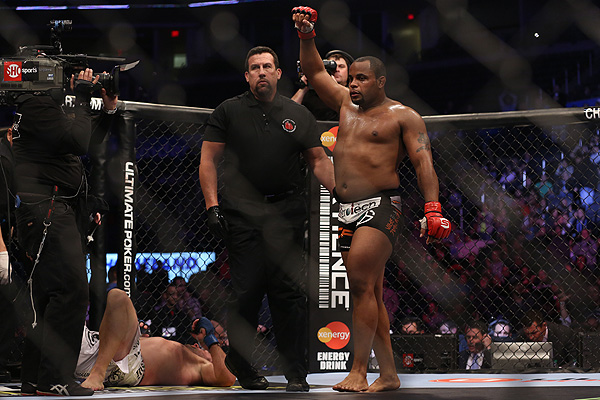 Is Daniel Cormier Making a Mistake?

The main event for UFC 230 is set. Daniel Cormier will defend his heavyweight title against Derrick Lewis, who is coming off a spectacular knockout of Alexander Volkov just a couple of weeks ago at UFC 229.

The “rivalry” between these two big men has its origins at the UFC 226 pre-fight presser, where Lewis took a humorous swing at Cormier’s “All About That Cake” commercial. Now, the two fighters are just a couple of weeks away from standing across from each other in the Octagon as opponents.

As far as match-ups go, it’s a pretty straightforward one. Lewis enjoys a ridiculous amount of power. There is not a second in the fight when an opponent can be off-guard against Lewis. We saw this in the Volkov fight. Cormier is, in a lot of ways, the complete opposite of Lewis. He brings endless cardio and pressure to the cage, further backed up by his Olympic-level wrestling.

Stylistically, this doesn’t look good for Lewis. Very few people possess the ability to take shots better than Cormier, and if there is one thing that we have seen in the past that led to Lewis’s struggles, it’s his cardio. Even in his most recent fight against Volkov, Lewis’s cardio seemed to continuously get in the way. Now, Lewis is making the quickest turnaround of his UFC career, and it comes against easily the toughest opponent of his pro career.

Lewis is not the only one taking risks in this fight, though. There is far more risk here for Cormier. Sure, he is fighting Lewis, who is coming off a tough battle, and the match-up favors him, but there is plenty that Cormier is putting on the line here.

One of those things is his opportunity to fight Brock Lesnar before riding into the sunset. After capturing the heavyweight title at UFC 226, Cormier and Lesnar engaged in some heated drama inside the cage. Whether it was fake or not, we don’t know, nor will we ever, but the stage was set and remains there for Cormier. However, now he must first defeat Lewis. If he does not pull off the win, which is very possible, he will lose all of the massive opportunities that he has in front of him. That includes not only Lesnar, but possibly even another grudge match with the returning Jon Jones.

In addition, Cormier is coming off a hand injury. Although it did not require surgery, the hand won’t be at 100 percent come fight night, as confirmed by Cormier himself. The situation for this fight could not come at a better time for Cormier, given Lewis’s own health and subpar cardio, but it’s always risky to go into a championship fight not feeling at his best.

Last, but most definitely not least, let us not forget that Cormier is putting his title on the line. If Lewis manages to pull off the win here, then Cormier, who relinquished his light heavyweight strap, will be titleless after December when Jones and Alexander Gustafsson square off for the 205-pound belt.

Of course this doesn’t mean we should count out Cormier. It’s never smart to dismiss “DC.” The reigning heavyweight champ will be a sizable favorite against Lewis regardless of the conditions beforehand. Yet, Cormier’s chances certainly do merit consideration, because there are so many things “wrong” about this fight. It feels extremely forced, and it could be a huge mistake for Cormier.