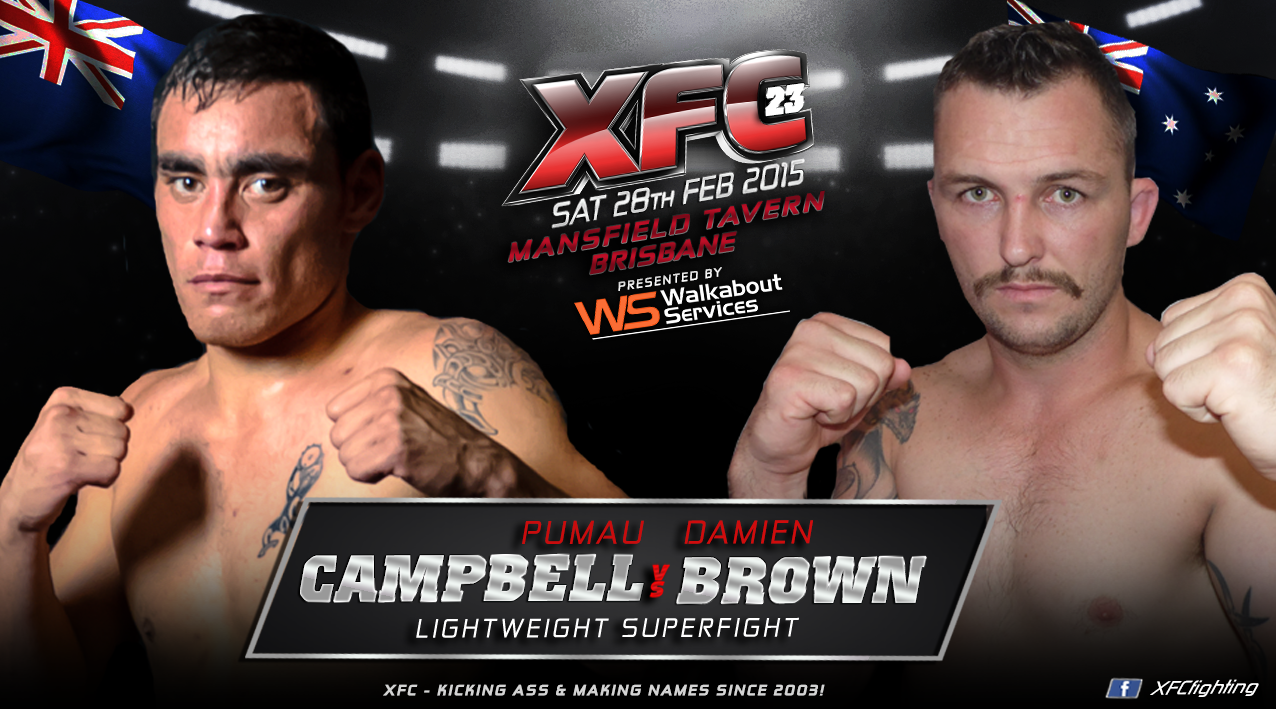 XFC has added another feature bout to its XFC 23 card.

Combat Press has learned that lightweight Damien Brown will meet Pumau Campbell on Feb. 28, 2015 fight card which takes place at Mansfield Tavern, Brisbane, Australia. The two were supposed to square off at XFC 22, however, Campbell suffered a broken hand in the lead up to the bout and the fight was subsequently scrapped.

XFC Promoter Justin Lawrence told Combat Press, “XFC had an awesome 2014 with three sold out events. Our last event, XFC 22, all seating was sold out six weeks before the show. As a thank you to to the fans who support us, we have made a super top heavy show. With [the] UFC now committing to the huge Melbourne show next year, it is vital we give the best homegrown fighters the opportunities to grow, impress and hopefully create bigger opportunities for themselves.

“XFC 23 will be absolutely massive. In 2009 we did a show with [Brian] Ebersole, [Soa] Palelei, [James] Te Huna & [Robert] Whittaker. With all those big names at the time on the show, I believe that XFC 23 has the potential to be bigger. We’re all about skyrocketing talent to an international stage. We’ve also had [Kyle] Noke, [Hector] Lombard, [George] Sotiropoulos and many more fighters cut their teeth in XFC. The fans are the winners on Feb. 28 as they will witness the next wave of Aussie and Kiwi MMA superstars go to war on the XFC 23 card.”

Brown is making his return to competition on Australian soil after three hard-fought contests under the Cage Warriors banner that saw the Australian go to the judges’ scorecards in all three bouts. Most recently Brown competed out of his natural weight class, taking a fight in the welterweight division.

“I’m looking forward to fighting in Brisbane again that’s for sure,” said Brown. “By the time the fight comes around it will have been 20 months since I’d fought in Brisbane. I’m excited to get in there with a Kiwi, especially since he beat my teammate. I don’t do revenge and shit like that, but it’s just gonna be a good test for me to see where I’m at. He’s an aggressive guy and it’s gonna be a good fight for me. ”

“It’s always good to finish fights and I would love to put Damien away. It will not be an easy task and regardless of how it ends, there will be fireworks,” Campbell exclaimed. “I’ve been loving the Australia versus New Zealand banter that has been flying around. And just like the other Kiwis on the card, I’m passionate about my country and aim to do NZ MMA proud. Choosing to fight Damien wasn’t a hard decision, I know he’s a tough, well-seasoned fighter with a wealth of experience. How [do] I feel? Nervous and excited, but at the end of the day he bleeds the same color as me, walks on two legs and uses two arms, he’s a man and anyone can be stopped, it’s the nature of the game.”

Also scheduled for the card is the professional debut of XFC amateur welterweight champion Ty Duncan and a title defense for amateur lightweight champ Gavin Hain.

Tickets for the event are available from the promotion, and inquiries can be sent through email (info@XFCfighting.com) or via telephone 0432 277 709.