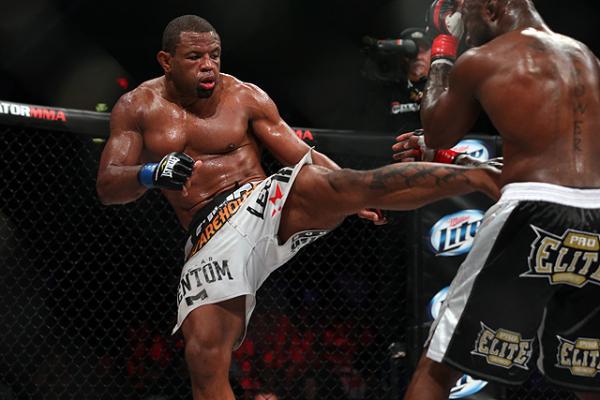 On Friday, Sept. 12, Bellator MMA hosted its 124th event from the Compuware Arena in Plymouth, Mich.

In the night’s main event, the promotion’s light heavyweight title was on the line as champion Emanuel Newton faced off with UFC veteran Joey Beltran. Newton looked to make the first defense of his unified 205-pound belt, having exacted revenge from former champion Attila Vegh in his most recent outing. The 30-year-old Californian had scored a pair of wins over former Strikeforce champion Muhammed “King Mo” Lawal during his recent streak. Beltran, meanwhile, picked up his first win in the last two years by submitting Vladimir Matyushenko at Bellator 116 in April.

The main card also featured the completion of the promotion’s light heavyweight tournament as unbeaten Liam McGreary squared off with Kelly Anundson. England’s McGreary entered the contest having finished all five of his Bellator appearances in the first round. Nevada’s Anundson rode a six-fight winning streak of his own into the bout.

Light heavyweight champion Emanuel Newton retained his 205-pound title with a third-round, spinning backfist knockout of Joey Beltran. The opening round of the fight saw the fighters trade positions often along the fence. Both fighters maintained a high pace from the clinch, with Newton largely getting the better of the exchanges. However, in round two, Beltran’s constant pressure started to wear on the champion. Beltran stayed inside of kicking range and peppered Newton with body strikes. Newton scored with a brief takedown, but the round was the challenger’s. The momentum was in Beltran’s corner heading to the third round, but history repeated itself as Newton scored his second, spinning backfist knockout inside the Bellator cage, sending an unconscious Beltran crashing to the mat.

England’s Liam McGeary scored yet another first-round finish, submitting Kelly Anundson with an inverted triangle choke to claim the light heavyweight tournament. McGeary took Anundson’s back in the opening minute of the fight, but the fight quickly returned to the feet. Anundson used his wrestling prowess to put the lanky Brit on his back. Anundson passed to side control, but McGeary attacked with a kimura off his back. Anundson yelled in pain, but was able to escape the hold and score with elbows and punches from the top. McGeary struggled from the bottom until the waning moments of the opening round when he was able to throw his legs up and lock in an inverted triangle choke. Anundson had no choice but to tap.

Bantamweight L.C. Davis spoiled the Bellator debut of of Brazil’s Zeilton Rodrigues with a dominant decision win. Davis scored with counterstrikes early before taking the fight the ground. Rodrigues attacked with a weak guillotine attempt, but Davis easily passed to side control. Davis delivered ground and pound from the top, prompting Rodrigues to look for a leg lock, but Davis easily defended. It was more of the same in the final two rounds as Davis easily kept Rodrigues on his back and defended the Brazilian’s submission attempts. Davis opened a large cut over the eye of Rodrigues late, sealing the clear-cut decision in his favor.

In his Bellator debut, lightweight Ryan Couture wasted little time in submitting late-replacement opponent Tom Bagnasco. The UFC and Strikeforce veteran looked to bring the fight to the ground from the opening bell and was able to put Bagnasco on his back inside of a minute. Once there, Couture methodically passed Bagnasco’s guard and moved to the mount. He forced Bagnasco to give up his back and sunk in the fight-finishing rear-naked choke just three minutes into the contest.