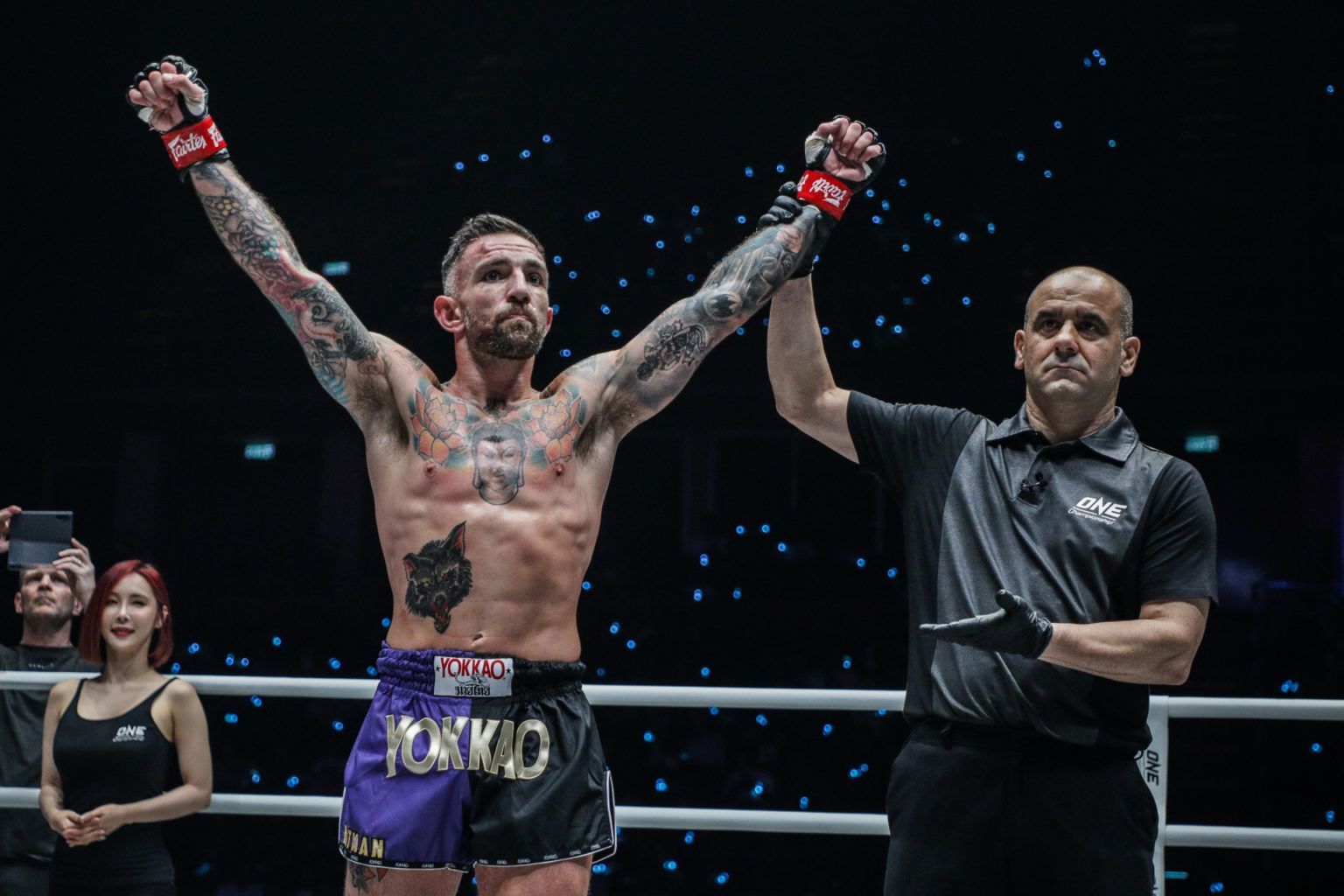 Following his latest jaw-dropping outing in the ONE Championship Circle, striking star Liam Harrison is ready for his shot at Nong-O Gaiyanghadao’s ONE bantamweight Muay Thai world championship. Harrison earned his opportunity to face the longtime divisional king with a win over Muangthai PK.Saenchai at ONE 156. Though their bout lasted less than a round, it will go down as one of the most thrilling bouts in the promotion’s history, thanks to the five knockdowns and Harrison’s almost-unbelievable comeback.

The win earned the British dynamo a previously unheard-of one-hundred-thousand-dollar bonus and bolstered his confidence that he is an athlete who can bring the house down every time he steps into the Circle.

“It’s exactly what I said in the pre-fight interview,” Harrison told ONE. “What you see is what you get, and I always just bring ridiculousness like this. Whether I win or I lose, there’s always some sort of drama that goes on. This had probably as much drama as you will get in any fight in our lifetimes – all in the space of one round.

“I know I’m dangerous when I’m wearing them little gloves, and if I have to take a few shots, and if I have to get knocked down then so be it. I believe in my power so much that if I land clean in those 4-ounce gloves on anyone they’re gone. And I proved that again.

“I shouldn’t have made those mistakes. I shouldn’t have got knocked down [twice]. But you know what? I don’t care. It won me Fight of the Night, it won me a big bonus, and it’s taught me some lessons. There’s a lot to take out of it. And obviously, I’m here to entertain the fans. We’re entertainers, and that is what I did. There were millions of people watching that around the world must have been gobsmacked.”

Next up for “Hitman” is Nong-O, who will be a whole different problem than his previous opponent. Undefeated in ONE Super Series action, the Thai superstar is better than ever. He has scored knockouts in his last three world title defenses and has a perfect 8-0 record in ONE. Regardless of the stiff challenge against a legend, this match is the one that Harrison has always been clamoring to get, and he is confident he can end the champion’s dominant reign.

“Everyone has always asked me, ‘Who do you wish you could have fought?’” said Harrison. “I always said Nong-O, but I thought I might not ever get the chance. Now I have. And especially now for his belt as well. So it came at a perfect time. He’s been on an eight-fight win streak in ONE. He’s defending his title and no one’s been able to touch him, but all good things come to an end, so let’s just see what happens.

“I know what level of skill this man is on. I’m not an idiot. He’s one of the most skillful fighters [of all time]. So what else am I going to do? I’m not going to change my style now just because I’m coming across one of the best fighters of all time.”

While some athletes may become more conservative when they get their shot at the gold, fans shouldn’t expect Hitman to suddenly change course from what brought him to the top of the division. Harrison plans to bring the same exciting style into his title match and stay in Nong-O’s face in the hopes of scoring another shocking knockout.

“I’m going to fight ‘Liam Harrison-style,’ because that’s what got me to where I am today,” said Harrison. “I’m not going to start trying to out-technique him or run away. I’m not about that. I’m about heart, grit, hard punches, hard kicks, and just coming to entertain and look for the knockout. And listen, if anyone could knock him out, it’s me. Nobody he has fought with punches like I do. If I land clean, then anyone in four-ounce gloves will go.”

No date has been set for the ONE bantamweight Muay Thai championship showdown, but Harrison is already planning to upend the Muay Thai world with an explosive knockout of one of the all-time greats.