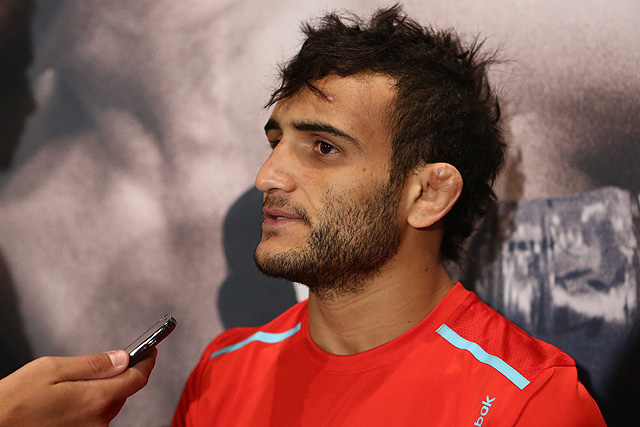 Weighed Down: Can Kelvin Gastelum and John Lineker Still Contend in a New Division?

There have been so many crazy things happening in the MMA world since 2015 kicked off that it’s almost hard to keep track of them all. We’ve had Jon Jones test positive for cocaine use. Bellator went crazy and signed Kimbo Slice and Ken Shamrock to put their combined 90 years into the cage for a “superfight.” The biggest star in the sport, Ronda Rousey, spent the majority of fight week in a war of words with an Octagon girl and then finished her actual opponent faster than your average bathroom break. It’s been a strange couple of months, and particularly weird was the UFC 183 event in late January that saw Anderson Silva and Nick Diaz break some records when it comes to total drug test failures in a single fight.

The news that Silva, long considered the greatest fighter of all time, had failed not one, not two but three post-fight drug tests was enough to toss everything else in the MMA news cycle to the wayside. Jones’s problems were all but forgotten, the fight between Silva and Diaz itself was forgotten and with each subsequent report, more and more about UFC 183 became old news, including two highly ranked fighters on the card badly missing weight and getting the ultimate punishment: a forced move to a new division.

Kelvin Gastelum and John Lineker each had a chance to make a statement and get into their respective division’s title picture heading into UFC 183, but things went horribly for both men.

Gastelum was riding an undefeated record into a co-main event bout against a legit top-five opponent, but a bad weight cut that resulted in the prospect missing the welterweight limit by a ridiculous nine pounds left him at less than 100 percent on fight day and with an enormous cloud over his head. This led UFC President Dana White to decide to bar Gastelum from the 170-pound division in the future. As a result, Gastelum’s hard work during his three-fight run at welterweight was shot. A decision loss to Tyron Woodley was just another setback for Gastelum during an already terrible weekend, and now the former The Ultimate Fighter winner has been sent packing to a new division with his first career loss still fresh on his mind.

Unlike Gastelum, Lineker was fully aware of what the consequences would be if he failed to make weight at the event. “Hands of Stone” was already a seven-fight UFC veteran heading into the event, but he’d missed weight in three of his 125-pound bouts already and knew that making weight could easily be the difference between a title fight and moving to a new division following the card. Despite the warnings from the UFC, Lineker couldn’t get the job done and missed his mark yet again, coming in at 130 pounds. It was a huge blow to Lineker, who was creeping towards a spot opposite Demetrious Johnson for the flyweight belt, but it was also a huge blow to the flyweight division itself. Either Lineker or his opponent, Ian McCall, would have been a fine foil for “Mighty Mouse” if everything had gone according to plan on the scales, but Lineker won the fight and was pushed to bantamweight by the UFC, leaving a pretty sizable hole in the 125-pound title scene.

Both fighters were obviously talented enough to climb into the top 10 in their old divisions, but moving up 10 to 15 pounds is a major test for these guys heading forward.

Gastelum, who had previously competed as a middleweight before moving down to welterweight, saw his momentum stunted when he lost to Woodley. Now, he’s heading into a division where he’s going to be at somewhat of a size disadvantage against the majority of his competition.

Unlike Lineker, who has missed weight enough times that he’s actually technically competed as a bantamweight as often as a flyweight in his career, Gastelum has been forced to move up in weight after two (admittedly terrible) debacles on the scale. Despite missing weight by almost 10 pounds in his last fight, Gastelum has looked like a natural welterweight in the past and it seems like 170 pounds is the division that suits him best. While Gastelum looked like the bigger fighter in some of his more high-profile bouts against Rick Story and Jake Ellenberger, he never looked massive and out of place, like Anthony “Rumble” Johnson did back in the day or how Hector Lombard sometimes looks now. Gastelum is a big guy for the 170-pound weight class, but the cut doesn’t seem to be as ridiculous as some that we’ve seen in the past. In fact, Gastelum has hit 170 on the money twice in his five bouts, forgoing the extra allotted pound. That’s not something that guys who have trouble hitting weight do most of the time.

One would hope the UFC would show Gastelum some mercy and let him drop back down to 170 if he feels outgunned at 185 in his next bout. However, if the promotion decides to stick to its guns, then Gastelum may be done as a top-10 fighter. While his additional size definitely helped his grappling, which is his main asset at 170, Gastelum didn’t just out-muscle his opponents. He still ended up having to work in order to hit most takedowns. It’s only going to get harder for Gastelum to get guys to the mat at middleweight, and with premier strikers like Lyoto Machida, Vitor Belfort, Anderson Silva and more sitting atop the division, Gastelum’s ability to get the fight to the floor is going to be extremely important. That’s not a good scenario for the TUF winner going forward.

While Gastelum at middleweight seems like it may be doomed from the start, things shouldn’t be quite as brutally for Lineker when he makes his bantamweight debut. It’s doubtful the UFC is going to let Lineker retain his status as a top-five fighter during this move to 135 pounds, but if he gets an opponent sitting in the lower half of the rankings he could find himself with a number next to his name fairly quickly. While not nearly as shallow as the flyweight division, bantamweight is far from the most talented division on the roster. In addition, the vast amount of injuries to fighters in the top 10 could open up some opportunities for the Brazilian slugger. There are definitely a few winnable fights for Lineker against some lower-ranked fighters if he draws the right match-ups, and as the top guys get healthy and become available, a win over one of those guys could lead to a golden ticket and a fight against a big-name opponent.

That being said, Lineker’s chances at beating a top-five bantamweight like Urijah Faber or Michael McDonald range somewhere between slim and none. While he was obviously too big for flyweight, that didn’t stop Lineker from being thrown around by Ali Bagautinov — the one real wrestler he fought — in his last loss. The Dagestani-born fighter took down Linker six times during their UFC 164 bout and rendered the heavy-handed Brazilian’s offense useless on his way to a decision win, and there are plenty of strong wrestlers like Faber and current champ T.J. Dillashaw who can exploit that hole in Lineker’s game.

It may feel like Lineker moving to 135 pounds is a longtime coming, but there was obviously a reason that the fighter was determined to keep trying to make flyweight. The reason is likely going to reveal itself as his takedown defense once “Hands of Stone” hits the cage as a bantamweight. It may not be in his first fight, and Lineker may score a few wins with his hands and work his way up the ladder, but eventually the Brazilian is going to run into a strong grappler and that will be the end of his run. He may have been able to avoid those guys at flyweight and sneak his way into a title fight if he had been able to stick around, but the top of the rankings at bantamweight features too many fighters that would be all too happy to drag Lineker to the mat at will.

The future just doesn’t seem as bright for these two as it did when 2015 kicked off. Gastelum is only 23 years old and has a ton of potential, but it’s hard to envision him having the same success at 185 pounds as he has had at 170. The TUF winner still has plenty of time to grow, but the inside track to the title scene he was on at welterweight isn’t going to be as readily available in his new home. Lineker may not have the hype or the high ceiling that Gastelum has, but he’s still only 25 years old and holds a pretty stellar 6-2 UFC record. Yet, any chance of him fighting for a title anytime soon went out of the window when he was booted from the flyweight division.

The build to UFC 183 was all about Anderson Silva. Obviously, following the fight, the media would be stupid to concentrate on anything other than the drug-test fiasco that came just days later. But, somehow, with all of the focus following UFC 183 firmly set upon the mistakes of the greatest fighter of the past, the mistakes of two of the more promising fighters the UFC had to look forward to in the future may have killed a couple of promising careers right under our noses. Both men are still young and have a lot of time to get their skills up to par, but UFC 183 may have been the final event where the names Gastelum and Lineker are mentioned in the same breath as a UFC title.